Firstly, I’d like to thank the many readers of the Cochrane Eagle for honouring me with their votes in the Readers’ Choice Awards.
May 1, 2013 12:00 AM By: Cochrane Eagle Staff 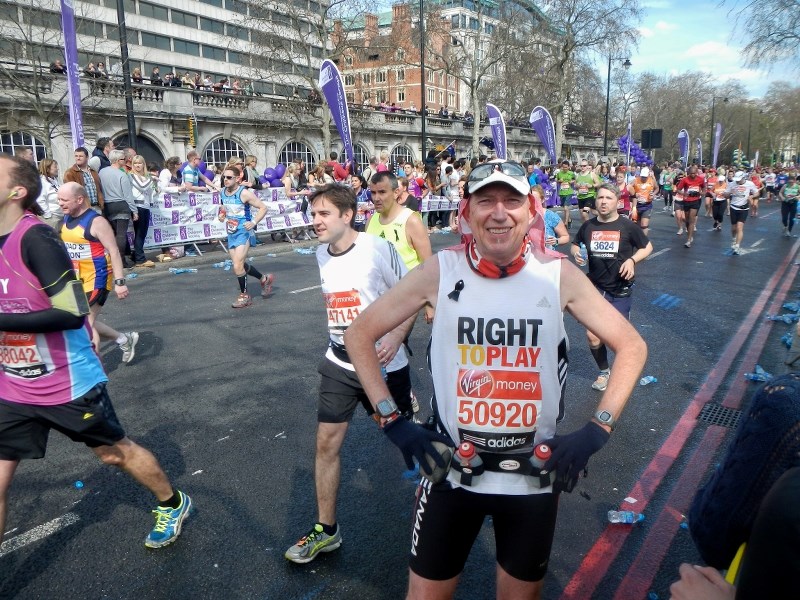 Firstly, I’d like to thank the many readers of the Cochrane Eagle for honouring me with their votes in the Readers’ Choice Awards.

Now, to tell you about my latest exploits.

At 9:55 a.m. April 2, I was in London, England, standing with 35,000 other runners, in complete silence. A whistle had blown and for 30 seconds a hush fell across the mass of singlet clad individuals. This act of remembrance was for runners and supporters in Boston who had been killed or injured in the worst act of terror since 9/11.

The Boston marathon had taken place just a week before and there was speculation about the status of the London marathon. Should it be cancelled or postponed? The consensus was overwhelming. It would go ahead.

A second whistle sounded and a huge cheer went up. We were ready to race. In the world of marathons, London is unique. It holds the Guinness World Record for “The largest one day fund raising event”. In 2012 over $85 million was raised for hundreds of charities. As I stood waiting for the 10 a.m. start gun to go off I could see a number of runners with their chosen charity printed on their shirt. There were also many in costumes.

The logistics of this event are mind-blowing. There were three starting chutes and I was in the red chute. There was also a green chute for the elite runners and a blue chute for fast age-groupers. From the time the start gun was fired, it took 20 minutes just to get to the timing mats. I started knocking off the kilometres and was spurred on by the packed crowds lining the streets. Every so often I’d here “Go, Right To Play, Go”. The route takes in some of the historical landmarks in London including Tower Bridge, Big Ben and the Houses of Parliament.

I kept a good pace but it’s the first time I’ve been in a race where there were people around me for the whole 42.2 kilometres. My step-son, Calum, lives in London and at the 40 kilometres mark I heard a yell and there he was. I couldn’t believe how he had tracked me down amongst all the runners and spectators. It was a great day for running but the temperature was rising as I approached the last two km. I felt pretty good and pushed it a bit over the final 200 metres. I was therefore a bit surprised when Mary Poppins came up beside me and nipped me at the post. Next time Poppins!

My target time was four hours and 40 minutes so I was very pleased with my 4.37.42. I had arranged to meet Calum and Kathryn, from the UK Right To Play office, at a spot along Horse Guards Parade. The finish was a mass of humanity but fortunately RTP had a flag flying and I tracked them down. Kathryn asked me what my next marathon was.

Well, on May 26 I’m running Calgary, and London has given me lots of ideas.