Have you ever received a letter or postcard so vaguely addressed that you scratch your head trying to figure out how it managed to find you? Cochrane old-car guy Windy Erhardt did recently, and it speaks well of his popularity, our postal service, an
Apr 17, 2013 12:00 AM By: Cochrane Eagle Staff 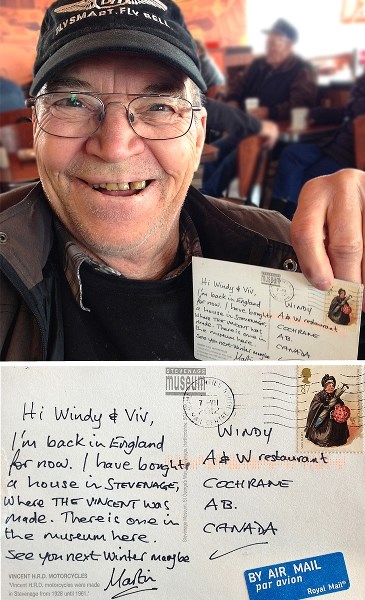 Windy Erhardt holds a vaguely-addressed postcard from a friend in England that he received at his usual table at Cochrane A&#038;W.

Have you ever received a letter or postcard so vaguely addressed that you scratch your head trying to figure out how it managed to find you? Cochrane old-car guy Windy Erhardt did recently, and it speaks well of his popularity, our postal service, and the fast-food place where such a piece of mail actually greeted him over coffee one morning.

But more about that in a minute. First, some responses to last week’s column.

In that column I summarized a debate our coffee companion Ron Nowell and I were having over the difference between hearing and listening, and especially about intentionally engaging our ears with our minds and hearts to affirm others and to effect life-changing actions in our own lives.

Creativity coach Leo Peters emailed me about folks’ unfortunate conversational habit of thinking about what they’re going to say next instead of paying attention to what the other person is saying.

“Your message reminds me of a listening story I was involved in long ago,” he said. “An environmental group used to meet once a month on a Saturday. They spent all day talking and no one listened to anyone else and they got nothing done. So I chaired a meeting and had them summarize what the person ahead of them said before they gave their own thoughts on the subject.

“‘WOW!’ said one lady; ‘for the first time I’ve felt that I’ve actually been heard.’ The rest agreed and started listening a lot more thereafter.”

(Did I mention that Leo is also a professional Santa? Imagine how you’d feel as a kid if you climbed up on Santa’s knee to tell him your wish-list, only to suspect after a minute or two that he wasn’t really listening to you after all?)

Educator Denise Peterson wrote that this is a top-priority lesson elders of the Siksika First Nation have been teaching her. It’s about learning “to engage our hearts in our listening,” she said.

Elisha Kittson, formerly of Bragg Creek and now living in the Okanagan, absolutely agrees. “Listening comes from a deeper place, an open place, from the heart,” she wrote – “a place I have to consciously tune in to in order to respond instead of react.”

But on this point, Mackay’s Ice Cream fan Anna Tremblay added that “neither the heart nor the mind will open if there is no passion to understand as much as to be understood.”

Then there was this note from Peter Poole, of Banff, who reminds us that “this is a time when the birds sing life back to our watershed. The juncos arrive trilling, and the varied thrushes sing their schoolyard whistles from the tops of spruce trees.”

Now back to Windy and the amazing piece of mail he received.

He was seated at his usual table by the newspaper rack at the Cochrane A&W, when its genial proprietor, Mike Bigland, handed him a strangely addressed postcard.

It read simply: “Windy, A&W restaurant, Cochrane, AB, CANADA.” No full name, no street address, not even Windy’s own residential address. And horrors, no postal code!

But the greeting from his friend Martin Douthwaite in England had actually found its way into Windy’s hands, and it fanned the embers of his soul to know that his fellow antique car buff was well and that he had just purchased a home north of London in Stevenage, of legendary Vincent motorcycle fame, another of their mutual interests.

So in this instance, engaging the heart was involved, too, I guess. The post office heard a postcard pleading to be delivered and did something about it, and Mike knew which of his A&W customers to give it to. Yes, this is certainly one of the joys of living in our friendly foothills town.