Many Cochrane residents pass by her every day, but who is she?

We’ve all passed by her at one point or another, but many wonder who the woman depicted in the Legacy Statue on Cochrane’s Main Street really is.
0
Jan 8, 2015 12:00 AM By: Cochrane Eagle Staff 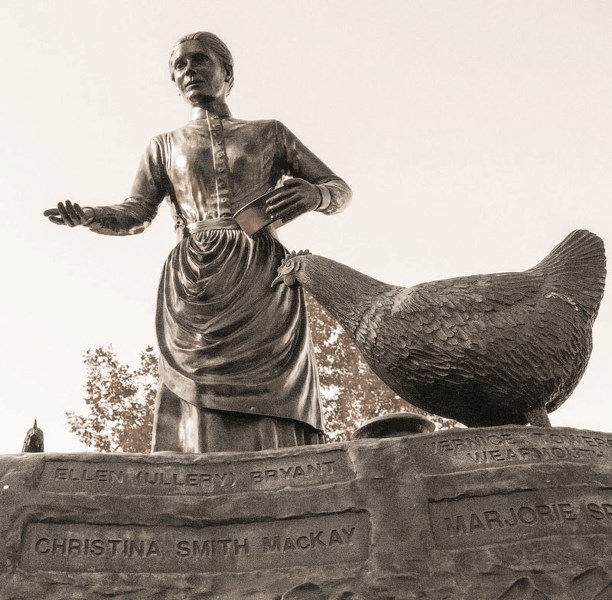 We’ve all passed by her at one point or another, but many wonder who the woman depicted in the Legacy Statue on Cochrane’s Main Street really is.

In 2003, the Cochrane Centennial Committee commissioned Studio West Bronze Foundry and Art Gallery to create a bronze sculpture honouring the hard working pioneer women who were involved in the dairy business. The statue was placed on First Street across from the Rockyview Hotel and there are around 40 names of Cochrane area women inscribed at the base of the Legacy Statue. As she appears to be feeding chickens, with a milk can at her side, many people have been known to call her “the chicken lady”, but who is she really?

Her name is Ella Patton and her great-grandson, Glen Holmes, lives right here in Cochrane and was willing to share her story.

Ella and her family came to Alberta in 1900 from Alta, Iowa. They had placed their most necessary possessions in a cattle car on a train, anxious to begin homesteading in what was then still the Northwest Territories – Alberta did not become a province until 1905. They settled in the Red Deer Lake area, just south of Calgary and Highway 22X.

Soon after, Ella met her future husband, Thomas B. Patton, who lived just down the road and was a school teacher at Red Deer Lake School.

After their marriage, they decided to start their own homestead in an area now known as Pump Hill in Calgary. In 1905 they purchased 10 acres at a cost of $10 per acre to start a market garden. In 1910 they expanded their operation by another 10 acres, which now cost $20 per acre. This huge market garden required a pipeline to irrigate their vegetable crops and a large reliable pump was needed, thus the name ‘Pump Hill’ came to being. The garden was named Fairview Gardens and their vegetables were shipped to many stores and markets in Calgary. The original pump has been restored and is on display at Fort Calgary.

Prior to Ella and Thomas settling there, the area was called ‘Strawberry Hill’ because wild strawberries were so bountiful every year and First Nations people used to come to pick them.

Ella and Thomas built a state of the art home for its time. Glen said, “There was even a hidden wall to hide behind in case of an attack. I can remember the fun we had when we were small hiding in there.”

Until she passed in 1946, Ella cooked on the St. Lawrence wood stove she brought on the cattle car from Iowa. Thomas died in 1936, leaving the next generation, Ralph and Flora Patton, to carry on the Fairview Garden business until 1978.

The original homestead is still in the family today with Glen Holmes’ cousin, Clarence Patton, residing at the same location as Ella and Thomas’ home.

Glen was a firefighter with the Rocky Mountain House Fire Department for 32 years until his retirement; his wife, Millie, had her own blind business there. They chose Cochrane as their home because their daughters wanted them close by. Glenda lives in Cochrane, Kim lives in Calgary and they also have an adopted daughter, Anika. Altogether, they have five grandchildren. Millie is working in Cochrane part-time and Glen is an active member of his condominium board, enjoys acrylic painting and walking his dog, Sunny.

I thank Glen for enlightening the people of Cochrane about this great pioneer lady on First Street, reaching out to all the pioneer women in the Cochrane area. Now at least we can call her by name – Ella Patton.