Words have shadows, too – you hear? Are you listening?

Last week’s column was on the photogenic shadows cast by coffee creamers, crystal goblets and bunched-up shirts.
Apr 10, 2013 12:00 AM By: Cochrane Eagle Staff 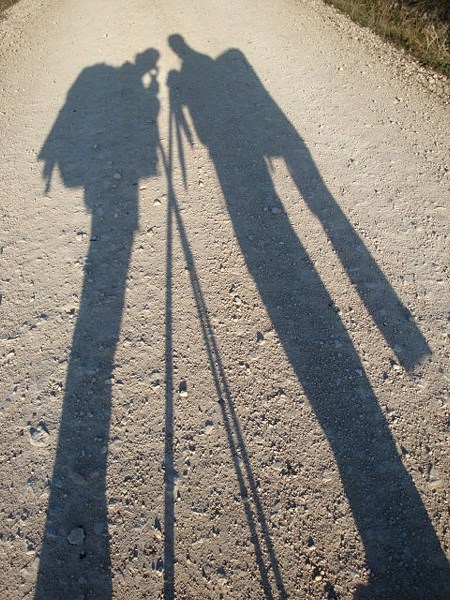 Marie-Linda Plante captured her shadow (left) and that of a friend while walking the Camino.

Last week’s column was on the photogenic shadows cast by coffee creamers, crystal goblets and bunched-up shirts. But did you know that words cast intriguing shadows, too?

Before we go there, however, I want to share with you a response on shadow photos I received from Marie-Linda Plante.

Marie-Linda’s walk of the Camino de Santiago was featured in my column for March 20.

The other day she sent me a photo she took early one sunny morning along the famous pilgrimage trail in Spain. As she and another pilgrim were heading west, they saw their shadows ahead of them, the overlapping shadows of their walking sticks/tripod, like an arrow, pointing the way.

“It was pretty cool when I saw my shadow, and I decided to ‘click,’” she says.

Words too, like visual shadows, carry interpretations beyond the literal – connotative subtleties that point beyond themselves to new ways of thinking and responding. And like shadows, one person’s interpretation of a word may differ from another’s.

That became apparent from correspondence with one of our coffee companions.

Ron Nowell, a former executive editor of the Calgary Herald, is a master wordsmith and outstanding listener. What gave rise to our email exchange, however, derived from his current role as ordained deacon at St. James Catholic Church in Calgary.

Responding to my Jan. 30 column on true dialogue and respecting others’ voices, Ron wrote:

“A timely topic, Warren. In fact, I’m going to talk about listening versus hearing in this weekend’s homily. I think most of us ‘listen’ to each other, but not as many of us ‘hear’ each other. Many people listen to Jesus, but fewer actually hear Him. To listen suggests we receive the sound waves, but to me, to hear means I not only listen, but more importantly, I also understand and respond in one way or another.

“Perhaps this is an answer to your column – rather than just listening to those voices around us, we should try to hear them – and pay attention and understand and respond.”

What began as an exchange on dialogue soon grew into a debate on semantics: Ron’s understanding of “hearing” versus “listening” as opposed to mine.

I wrote back to him, quoting G.K. Chesterton, an author we both admire. Chesterton, I noted, once said, “There’s a lot of difference between listening and hearing.”

That difference, to me at least, was to be found in the distinction between simply hearing the sounds of words and paying attention to what is heard. Thus, when in a restaurant, our ears may hear conversations going on at nearby tables, but it would be quite rude to actually start listening to them.

Citing his own references, Ron quickly responded that, yes, there is indeed a difference between listening and hearing, but I have the difference fundamentally backward.

Acknowledging that “even the definers don’t agree,” he brought me to the heart of the matter:

“The point I will make in my homily is that whether we hear or listen to the words of Christ we have to try to understand what He means and respond accordingly with our minds and hearts. We can’t just walk away from His words without processing them.”

And that’s pretty much what Ron said in that Sunday’s homily.

Meanwhile, I happened to be tuned in to a radio talk show when one of the speakers said, “I hear you!” And it was clear from the context that the speaker meant he agreed with what the other person was saying.

I immediately wrote to Ron to tell him we were both right. We start out by hearing audio signals with our ears. Intentionally we listen to the speaker. Then we can signal our willingness to take appropriate action by saying, “I hear you.”