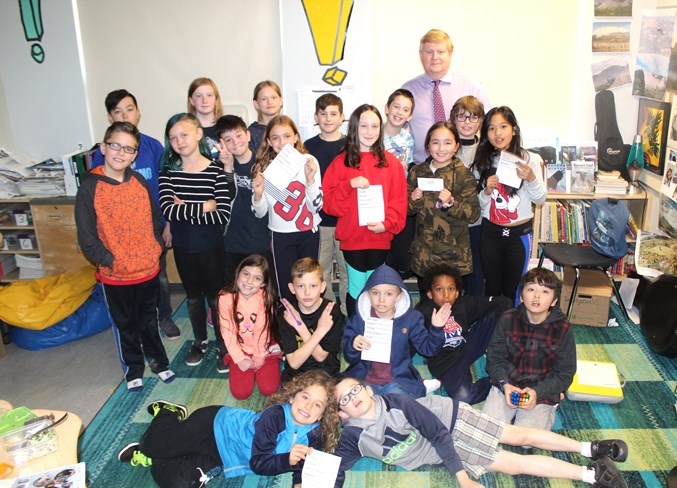 Bill Besley’s Grade 4/5 class at RancheView School participated in Student Votes 2019. These students watched videos and learned about party platforms with respect to the 2019 provincial election – selecting the NDP’s Steve Durrell as the first MLA of Airdrie-Cochrane, with a resounding message that the environment and education were topics that meant the most to them.

According to a class of nine and 10 year olds on April 15, Cochrane's next MLA should be Steve Durrell of the NDP.

Coming in at 12 votes, with the UCP's Peter Guthrie in at eight, Danielle Cameron of the Independence Party with two and Vern Raincock of the Alberta Party with one - Bill Belsey's Grade 4/5 class took part in Student Vote 2019 and determined it was the riding's NDP candidate who placed the most value on the environment and education.

"The right to vote is literally a right people around the world are dying to have," said Bill Belsey, an award-winning teacher at the school for his work as a technology pioneer, who joined the ranks of other teachers in the province with some 200,000 Alberta students taking part in the 'Alberta 2019 Student Vote.'

Belsey said it was his own father who instilled in him the importance of the democratic right of Canadians to vote. And it is integral to him, as an educator, to ignite the same in the leaders of tomorrow.

Students filed at their leisure to the back of the classroom to cast their ballots, with an emphasis on reserving their desire to share their vote with their classmates.

All this while Belsey delivered ties to democracy at the helm of the class, lecturing on the significance of April 15 - also known as Jackie Robinson Day or the day that signifies "breaking colour barrier in sports ... all the great athletes of colour ... they wouldn't be doing what they're doing in this time if it wasn't for Jackie Robinson in his time."

Through the non-partisan information platform, students from across the province submitted questions to the leaders vying for the leadership of the province. The top five questions were selected, to which the leaders shared their responses on video for students everywhere to see.

The questions were centered on health care, infrastructure, the carbon tax, education and priorities.

"I think an important issue would be education ... and the carbon tax," said Kellan Harris.

Vera Morante added that it's important to become informed as a youth today, in preparation for adulthood tomorrow.

Avery Wright said it's important to vote, "so you know what's happening and you want to know who is the premier."

All students agreed that education and the environment were of the utmost importance in this election.

Student Vote provides youth under the age of 18 an opportunity to gain experience in the voting process. It is the flagship project of CIVIX, the leading civic education charity in Canada. Since 2003, the charity has coordinated 42 Student Vote programs.