United Conservative Party volunteers are hopeful that a combative start regarding signage will cease in the three remaining weeks until election day (April 16).
Mar 24, 2019 10:54 AM By: Lindsay Seewalt 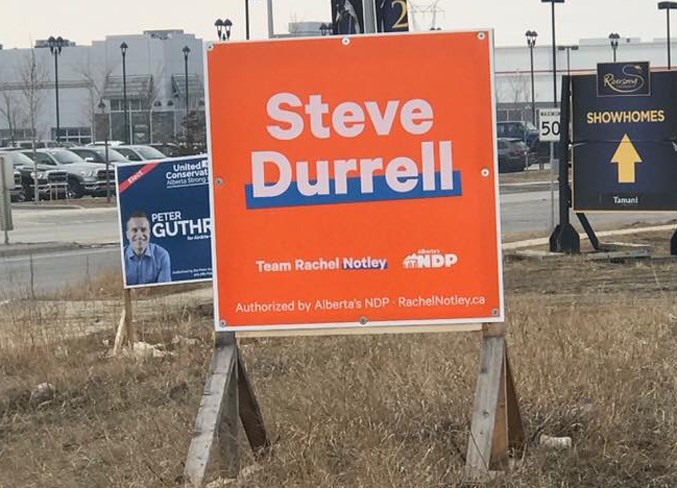 United Conservative Party volunteers are hopeful that a combative start regarding signage will cease in the three remaining weeks until election day (April 16).

Russ Kossowan, president of the Airdrie-Cochrane constituency association for the UCP, is looking to the NDP to follow their own rules of tightening up campaign signage.

"If you put a sign of private property, you need the landowner's permission," said Kossowan, explaining that the Peter Guthrie team were granted permission to place a sign on private property "just south of the Nissan dealership" but observed placement of an NDP sign for candidate Steve Durrell placed in front of theirs.

The incident has been reported to Elections Alberta.

Durrell said the placement was a misunderstanding over the boundary between private and public lands and apologizes for any confusion.

"We got a call about one sign, which was moved within 20 minutes," explained Durrell, adding that if anyone takes issue with sign placement to reach out to his team to ensure sign regulations set forth by Elections Alberta are being met.

"You would think because they made the changes that they would know the rules," said Kossowan.

This is on the heels of recent destruction of some UCP signs late last week in GlenEagles – leaving some exposed rebar and screws lying in the middle of the road, potentially hazardous to drivers.

"The message we'd like to get out there is whatever you do, don't endanger motorists."

Scott Godlien is a Guthrie supporter who had his lawn sign stolen last week, observing his neighbour's sign was also stolen.

"As a supporter of Peter Guthrie and the UCP and what he and the party stands for, I believe that respectful dissent is the lifeblood of democracy," said Godlien, who lives in GlenEagles.

"If people want to advocate for their candidate, contact their candidate's campaign team and request their own sign. Personal attacks, such as stealing of defacing opponents' signs is only a waste of resources, which is one of the NDP campaign highlights. This type of childish and disrespectful behaviour shouldn't be tolerated."

Durrell added that his team has also had some signs destructed and defaced, with supporters bringing signs back to his office for replacement.

Kossowan said that they are getting "constant requests" for lawn signs. In addition to the supply of 1000 lawn signs – with more on order – and several dozen 4x4 and 4x8 signs, they also have a "massive mobile sign" that keeps being requested to grace the front lawns of various residents.

"Where we really like to see lawn signs are on people's lawns," said Guthrie, adding that with respect to sign damage their chief concern is safety and not causing hazards for pedestrians or drivers. His team has mobilized patrol volunteers to monitor sign vandalism.

Durrell said his team has a "steady stream" of lawn sign requests and he is surprised by the amount of requests for larger lawn signs.