A spirited crowd of more than 400 packed the Lions Event Centre on the evening of April 9 – some supporters flashing their blue and orange signs, others curious to hear local candidates weigh in on what they would bring to the table if elected to rep
Apr 10, 2019 2:28 PM By: Lindsay Seewalt 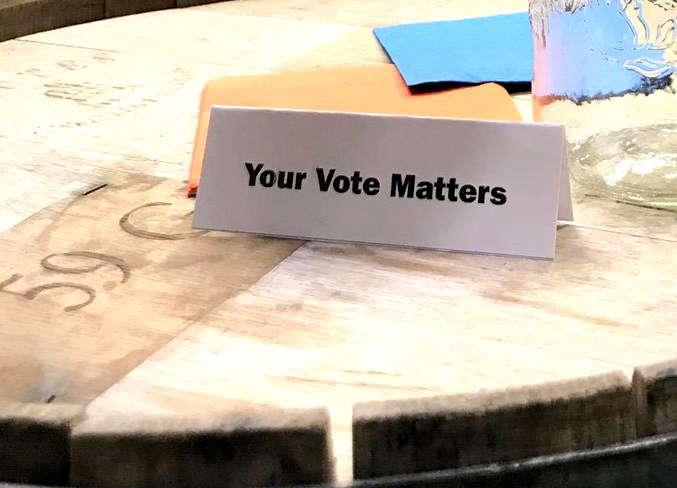 A spirited crowd of more than 400 packed the Lions Event Centre on the evening of April 9 – some supporters flashing their blue and orange signs, others curious to hear local candidates weigh in on what they would bring to the table if elected to represent their riding.

A mild smattering of cackles and off-the-cuff commentary aside, the crowd was mostly respectful and attendees were receptive to the opportunity to watch all five candidates vie to represent the local riding on the provincial stage.

The Eagle questions asked candidates their positions on support for 24-hour health care/boosts for local services; education funding (including separate/charter/independent schools); how to address climate change at the local level; and how to tackle rural crime.

The Chamber questions were more focused on business and the local economy, including the impacts/solutions to do with minimum wage hikes; carbon tax as it relates to impacts at the local level; infrastructure (namely the 1A/22 intersection); and engaging local businesses in the decision-making process to boost the economy.

The close of the evening featured vetted questions from the audience. All answers were timed to a maximum of 1.25 minutes.

While we encourage our readers to check out our live streaming of the event, as archived on our Facebook page news feed, here are some talking and platform highlights from the event for each candidate ...

Cameron lit up the audience with her engaging, bold and often humorous answers. The oil and gas professional related all the party platforms to the party's stance that there would be an abundance of revenues for Cochranites, for Albertans resulting from declaring independence from the rest of the country – which would take place following a provincial referendum – as these dollars would no longer be sent to Ottawa through federal taxes or equalization payments.

The cost savings from this separation would result in dollars to fund four years of university or trades at no cost to the student; ensuring funding follows the student and does not get lost in the system; $36 million for each municipality; a surplus to hire more "boots on the ground" and find efficiencies in "bureaucratic waste"; more educational resources for employers, including skills and safety training;

She spoke of lowering the foreign tax rate to nine per cent, the business to eight per cent, no taxes for anyone who makes under $45,000 per year and a total combined tax rate of 20 per cent to anyone over this threshold and significantly boosting dollars for those living on disability or AISH.

She maintained that "we aren't left or right, we're in the middle" on where the AIP fits in the overall spectrum.

Critical to Durrell's talking points was maintaining that the governing "Orange Crush" would be the only party to boost frontline services, keep class sizes down, hire teachers and build more schools. He also spoke of the need to protect LGBTQ children through Bill 24/GSA Alliances.

He confirmed that "the NDP will build the 1A/22 intersection" – countering finger pointing from the UCP that the project remains unfunded and is still in the design phase. He also said that 24-hour healthcare is a "must" for the "small city" that Cochrane has become.

With a "strong union background," Durrell defended the NDP's stance of "equal pay for equal work" with respect to the controversial minimum wage hikes – scoffing at the UCP's proposed rollback for youth workers to $13 an hour from $15.

He argued that the NDP's environmental policies have been business-friendly and will result in more prosperity for Albertans, highlighted boosts to green initiatives and transit.

Durrell received some flack from the crowd when he couldn't answer how many government hires have taken place under the NDPs, and how could this number "skew" employment stats.

A charged Guthrie made several references to the NDP's "job-killing carbon tax," assuring the audience that the UCP is the only party that will restore the Alberta Advantage and get people back to work.

He spoke in favour of supporting parent choice in education and equal funding for non-public schools; maintained that he would advocate for the 1A/22 interchange project; look to create a "health hub" in Cochrane for dialysis, ultrasounds and ready the town for future 24-hour healthcare, once it could be afforded; repealing the carbon tax, lowering corporate and small business tax rates and creating a minister of red tape to reduce bureaucracy for small businesses; tightening up punishments for repeat offenders and boosting rural crime supports; and boosting environmental stewardship programs and partnerships.

He said the UCP would bring the curriculum review back to the table for "proper consultations" but would "not scrap the new curriculum."

Guthrie also directly addressed a question on GSAs, clarifying that the issue is surrounded with "misconceptions" and that "the UCP supports GSAs ... we support a child's right to anonymity," but that there are flaws in the NDP's Bill 24.

Both Guthrie and Durrell state the budget will be balanced by 2023.

The Airdronian was clear on the party's stance to repeal the carbon tax and calling out the governing NDP for the "world of debt to the tune of $56B."

On healthcare, he said "I want to work with the frontline workers on these issues ... I will advocate for 24 hour urgent care – but that discussion is years away."

On small business, he said the FCP would "lower small business start-up feeds and red tape," and advocated for parent choice in education and religious freedoms.

"The state has no say in how we raise our children."

Raincock, who also hails from Airdrie, said that the "centrist" party would exempt homes, businesses, farms and non-profits from the carbon tax.

On education, he vowed to double educational assistants in the classroom and boost "high quality, low cost" childcare for all Albertans.

He maintained that getting the 1A/22 completed should be a non-partisan issue; linked the need to boost affordable housing to improving healthcare supports; said the party would not rollback the minimum wage increase in effect; boost supporting agencies to combat rural crime (Citizens on Patrol, Victim's Services); boost supports for non-profits; and bolster the tourism and commuter network with the support of a commuter rail through the Bow Valley Corridor.

To learn more about each candidate, visit their websites and Facebook pages.

April 16 is election day for Albertans.