Scheidegger back in the hack for 2020 Alberta Scotties in Okotoks 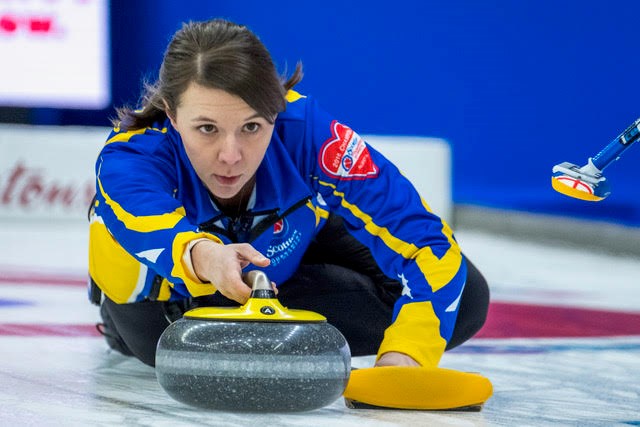 The skip for one of Alberta’s top teams will be at the helm for the first time all season at the 2020 Sentinel Storage Alberta Scotties Tournaments of Hearts later this month.

Lethbridge’s Casey Scheidegger, whose rink was at the Canadian Scotties the past two years, has been out of action as a result of giving birth in late November.

“This will be her first event back,” said Kristie Moore, lead for the Scheidegger rink. “It’s been tough because we didn’t have a consistent substitute for her. I ended up skipping in two events, Amber Holland skipped for a couple of events and Cheryl Bernard skipped in a couple of events.

“It was definitely a struggle to bring someone new in all of the time, but it was such an amazing learning experience to have different aspects on how the game should be played, different communication styles and things like that.”

Holland won the 2011 Canadian Scotties and Bernard has qualified for the national Scotties four times and was the silver medallist at the 2010 Winter Olympics in Vancouver — a team which included Moore as an alternate and Scheidegger’s alternate for the 2020 Alberta Scotties, Susan O’Connor.

The Scheidegger rink did well enough this season to qualify for the Alberta Scotties by topping the provincial Excel standings.

Team Scheidegger will be back in full-force in Okotoks. The rink consists of skip Scheidegger, Cary-Anne McTaggart third; Jessie Haughian, second; Moore, lead and O’Connor, alternate.

“Jessie and Casey are sisters so they have played together most of their careers,” Moore said. “Cary-Anne used to live in Milk River, which is not far from Lethbridge and then they brought me on three years ago now, knowing they wanted to push forward and bring someone in with a little bit more experience and who has done a few things. That’s how I made the cut.”

The foursome won the 2018 Alberta Scotties downing Okotoks’ Shannon Kleibrink in an extra end in the final. Scheidegger went on to finish 7-4 in the 2018 Canadian Scotties. In 2019, Scheidegger beat Manitoba’s Kerri Einarson 7-6 in the wildcard game to advance to the Scotties main event. Once again the rink went 7-4 and, just like 2018, it barely missed the playoffs.

Scheidegger’s road to the national championship goes through the 2020 Alberta Scotties in Okotoks — the team's record is not good enough for a wildcard.

“Alberta is the reason we have done as well as we have at the (national) Scotties Tournament of Hearts,” Moore said. “Alberta is a great province to come out of because there are a lot of great teams.

“You have to be on your game. Even those teams that are considered in the bottom half, can beat you at any time.

“You always have to be playing at your top ability.”

As for the Alberta Scotties, Moore is confident the team will be ready.

“Having the baby in the middle of the season is a bit of a hiccup, but it’s an important one,” Moore said. “Curling isn’t life and family is.

“We are practising a couple of times together before the event starts.

“Hopefully, that will be enough.”

Five teams have qualified for the 2020 Alberta Scotties. They are Scheidegger, Kelsey Rocque, Kayla Skrlik, Laura Walker and Jodi Vaughan.

The other three teams will come from a qualifying playdown at Jasper Place in Edmonton Jan. 10-12.

For ticket information go to https://okotokscurling.com/eventTickets.php/2020-ab-scotties-tournament-of-hearts