"A lot of people are trying to sell right now, but that does not mean they will get what they want ... sellers have to be prepared to price it appropriately and be realistic," said MaxWell Capital Realtor Robb Aishford. "The Canmore market has always done its own thing."
Oct 17, 2020 9:15 AM By: Tanya Foubert 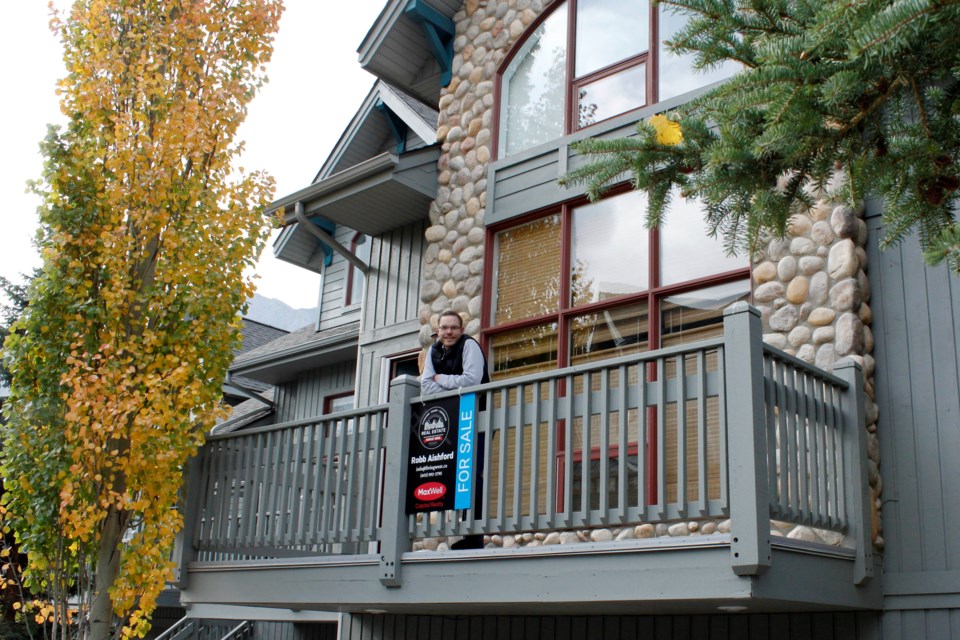 Canmore Realtor Robb Aishford stands on the balcony of a new residential listing in the Prospect Heights neighbourhood. After the COVID-19 restrictions were lifted this spring, real estate sales in Canmore have been booming. TANYA FOUBERT RMO PHOTO

CANMORE – The real estate market in Canmore is on fire.

Increased inventory, interest and sales have resulted in three of the busiest months for real estate over the past four years according to MaxWell Capital Realtor Robb Aishford.

"When COVID-19 hit, everything collapsed," Aishford said in an interview with the Outlook. "The market has definitely had an adjustment where both sides want value."

In February, $35 million in residential real estate was sold in Canmore, which dropped to $17 million in March and $9 million in April. Things began to rebound in May with $22 million in sales and $28 million in June.

But it is the July, August and September sales volume for residential – including single detached dwellings, condos, duplexes and townhouses – that have hit record levels with $59 million, $60 million and $54 million in property sold over the three month period.

Aishford said a number of factors are contributing to the hot market, including the low interest rates for mortgages, the value of the American dollar compared to the Canadian and the transition towards working from home that has resulted from the COVID-19 pandemic. He said those with cash or capital to purchase real estate are interested in buying a home in the mountain town.

"Canmore still has a certain je ne sais quoi – it is still popular," he said, adding Banff is off the table for most purchasers due to the need to reside clause. "It is expensive to live here because there is only so much land and there is demand for it."

Virtual tours of properties have become the norm, as it is difficult for those in the United States or overseas to visit Canmore at this time. Aishford said he will Facetime or Zoom with clients to inspect potential properties and has done showings with friends and family members before sales are finalized.

"It has changed the ball game now," Aishford said with respect to the coronavirus. "There are no open houses ... we do everything by video now – it is different."

For those looking for a new community to call home while working remotely, Canmore is an attractive location for those who can afford the prices. He said clients from Montreal, Toronto, Edmonton and Vancouver have all purchased homes in the valley for that very reason.

"We do not need to be in an office anymore due to COVID ... as long as you have access to high-speed Internet, you can set up a home office with everything you need," Aishford said. "They will have everything they want [living in Canmore] for the next three to five years – this thing is not going away anytime soon."

The number of units sold dropped from 50 in February to 11 in April. By July, there was 70 units sold, in August 72 and 64 in September. Currently, the average  number of days a property is listed before being sold is 17.

At the end of September, there were 281 properties for sale in Canmore, up 11.5 per cent from a year before. There is enough inventory, including newly developed properties, that buyers at the moment have choices.

Aishford said buyers are looking for value in the market and so are sellers. It is a different scene than in nearby Calgary, where real estate prices have dropped slightly and sales are down.

"A lot of people are trying to sell right now, but that does not mean they will get what they want ... sellers have to be prepared to price it appropriately and be realistic," he said with respect to sale prices. "The Canmore market has always done its own thing."

As for where the real estate market is headed in the short term, Aishford said it is hard to predict. But having grown up in the community and worked with his father, who is also a longtime local Realtor, he said Canmore has not lost its appeal even as it has become more popular.

"Canmore has changed," he said. "But still at its core, at least in my opinion, it is an amazing town – the community here is passionate and we look after one another.

"People want to move here because of the quality of life."