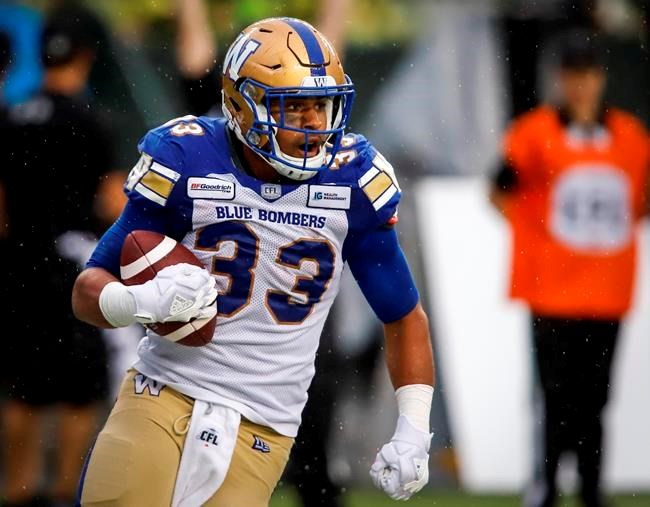 TORONTO — Running back Andrew Harris of the Winnipeg Blue Bombers has been suspended for two games following a positive drug test, the CFL announced Monday.

According to the league, Harris tested positive for Metandienone, which is a banned substance.

In a statement, Harris said he was tested March 1, July 2 and again July 12. It was after the third test that Harris added he was notified of the positive result.

Harris, a three-time CFL all-star and the league's top Canadian in 2017, said he never knowingly took a banned substance. Harris has helped Winnipeg (8-2) to spot in the West Division standings.

"Throughout my four years playing here in Winnipeg, I have been drug tested more than any other player on our team to the point that it has become a running joke within our locker room," Harris said. "I'm still in shock and disbelief at the news.

"The timeline makes it very clear — I was not using a banned substance for performance enhancing purposes, nor was I aware that I was taking any supplements with any banned substances in them. Based on the fact pattern, this is clearly a case of product contamination."

Both Harris's A and B samples came back positive, meaning he has already appealed and therefore must accept the suspension.

Harris, a 32-year-old Winnipeg native, is currently the CFL's rushing leader with 908 yards on 141 carries (6.4-yard average) with three TDs. His suspension comes at a bad time for the Bombers as starting quarterback Matt Nichols went on the six-game injured list last week with an upper-body ailment.

Harris, who came to the CFL in '09 from the Canadian junior ranks, said he's never been one to look for shortcuts.

"My road to becoming a starter in the CFL was extremely difficult, and I take a lot of pride in the honest blue collar work I’ve put in to reach this point in my career," he said. "As unsettling and painful as this is to me and my family, I hope this can be a helpful reminder to all athletes about being extremely cautious and aware of what they are taking and putting into their bodies."

Harris also apologized to the Bombers for the positive test.

"I can't wait to rejoin my teammates and the city of Winnipeg in our quest to bring a Grey Cup to this wonderful city that I am fortunate enough to call home," he said.

"As someone who has coached Andrew for four seasons now, I know firsthand the hard work and dedication he puts into his career as a true professional," O'Shea said in a statement. "Andrew has been tested eight times since becoming a member of the Blue Bombers, three times this season, including 10 days prior to the test that came back positive.

"While this is an extremely unfortunate situation, I support Andrew and look forward to his return in a few weeks."

Harris will miss both of Winnipeg's upcoming games against the Saskatchewan Roughriders (6-3).

"The Winnipeg Blue Bombers fully support the CFL's policy on performance enhancing drugs and have fully co-operated with the CFL in regard to this matter," said club president/CEO Wade Miller. "The Winnipeg Football Club also supports Andrew Harris through this extremely difficult and unfortunate situation.

"We look forward to Andrew re-joining us on the field for game days following the bye week."