WASHINGTON, Wash. — Hot mess, dumpster fire, train wreck: the reviews of the presidential debate are in, and they're not good. And those are just the family-friendly ones.
Sep 30, 2020 6:54 PM By: Canadian Press 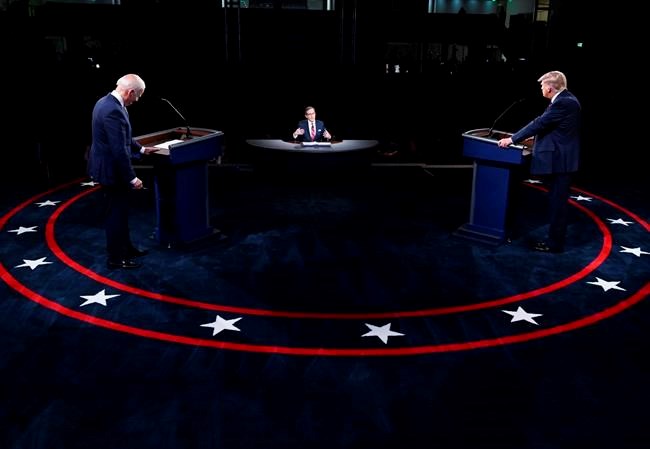 WASHINGTON, Wash. — Hot mess, dumpster fire, train wreck: the reviews of the presidential debate are in, and they're not good. And those are just the family-friendly ones.

So universally condemned was Tuesday's televised clash between Donald Trump and Joe Biden, some political observers are urging the U.S. Commission on Presidential Debates to call a halt to the remaining two.

President Donald Trump spent most of the night needling, badgering and talking over both Democratic challenger Joe Biden and moderator Chris Wallace, fuelling a cacophony of interruptions and insults that offered little help to American voters.

"The modern presidential debate was invented in 1960," James Fallows wrote in the Atlantic in the hours that followed. "We may have seen the end of its useful life this evening."

The commission acknowledged the controversy in a statement Wednesday as it promised "additional structure" for the next debates "to ensure a more orderly discussion of the issues."

"The CPD will be carefully considering the changes that it will adopt and will announce those measures shortly."

Americans and Canadians alike are no strangers to the political din.

The first meeting of the 2019 Democratic primaries featured no fewer than 20 candidates, debating 10 at a time over two nights. And in Canada, federal leaders' debates now routinely feature four or five candidates and no shortage of crosstalk.

But Tuesday's debacle has breathed new life into the debate about debates.

"It's not an inconsequential assertion," Biden said Wednesday when asked whether he believed it would be worth letting the debates continue.

The next one, scheduled for Oct. 15 in Miami, is slated to be a town hall-style event with a moderator helping the candidates navigate questions posed by members of the audience.

"I'm looking forward to it. And I hope we're able to get a chance to actually answer the questions that are asked by the persons in the room," Biden said.

"But God only knows what (Trump) will do."

Political experts on both sides of the Canada-U. S. border stopped short of calling for a halt to the 60-year-old tradition. But they agreed that more needs to be done to ensure that the value debates can bring isn't lost in the clamour.

"The format allowed for the bad behaviour from the bad participants," said Tammy Vigil, a communication studies professor at Boston University.

"The fact that they don't seem to have any control over the microphones ⏤ that seems like something that you would think they could easily do, anticipating a problem like this."

Even in Wednesday's case, there was something to be gleaned from seeing Trump and Biden interacting for the first time, she added.

"The comparisons of the behaviour, the content, the effort, does tell you something that contrasts those candidates in a way that other events can't really do," she said.

"We just haven't figured out how to make it as effective as it should be."

The problem with televised leaders' debates isn't the debates themselves, or even the leaders, but the '"televised" part, said Will Stewart, a senior vice-president with Hill+Knowlton Strategies in Toronto.

"I think we need to keep debates, but I'm not sure we need to keep televised debates," said Stewart. The two-podium, two-camera format hasn't changed since 1960 even as political communication has evolved dramatically, he noted.

Stewart, who learned about debate prep working with former Ontario Progressive Conservative leader Tim Hudak, said it's a tried-and-true tactic to shout down one's opponent to sabotage their messaging and spoil the clip for commercials and media coverage.

Biden, he said, shouldn't have been surprised by any of Trump's efforts to bait him into a confrontation, and yet failed time and again to resist the temptation.

Political leaders on the campaign trail always claim they won the debate, no matter how things went the night before. On Wednesday, Trump took that tactic to new heights.

"I looked at about six of 'em, we won every one of them. I don't mind debating him, but I hear he wants to get out the debates. So it's up to him."

This report by The Canadian Press was first published Sept. 30, 2020.