The budget officer's report estimated just $69 billion out of the $101.4 billion in new spending could be considered stimulus.
May 5, 2021 2:45 PM By: Canadian Press 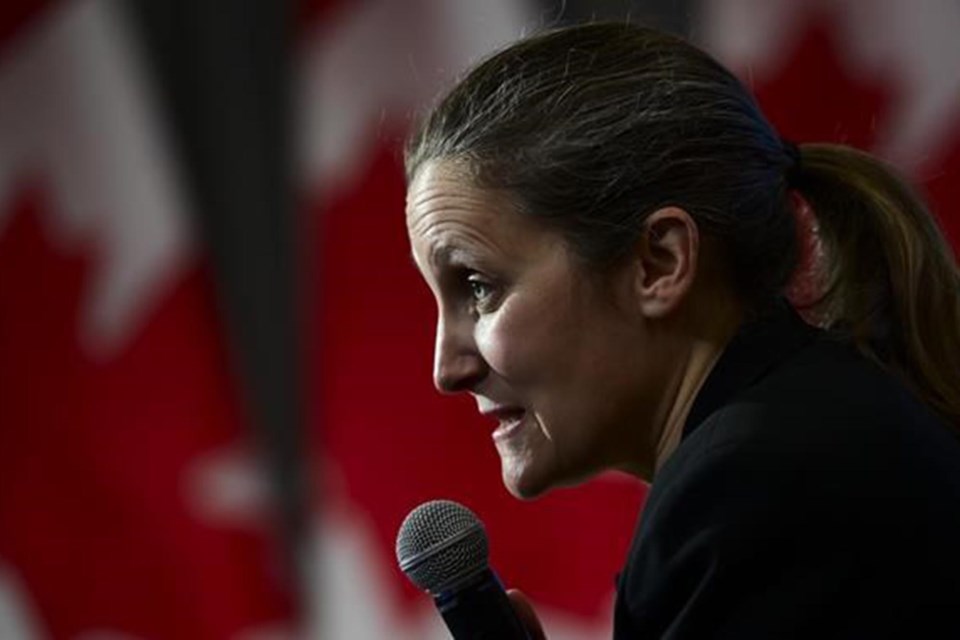 Minister of Finance Chrystia Freeland joins Prime Minister Justin Trudeau as they participate in a virtual discussion from Ottawa on Monday, May 3, 2021, with seniors from Residence Memphremagog in Magog, Quebec. THE CANADIAN PRESS/Sean Kilpatrick

OTTAWA — Parliament's spending watchdog says the federal Liberals' budget overestimates how much of an impact its stimulus measures will have on Canada's economy.

The budget last month outlined what the government said was $101.4 billion in new spending over three years aimed at helping the country climb out of the economic hole caused by the COVID-19 pandemic.

But the budget officer's report on Wednesday estimated that only $69 billion of that spending could be considered stimulus.

Yves Giroux said that spending would boost economic growth by one per cent next year and create 74,000 jobs, compared with the budget's estimates, respectively, of two per cent and 334,000 jobs.

He went on to say that the higher deficits and debt in the coming years could limit the ability of a government to introduce any new, permanent programs without spending cuts or tax increases.

Giroux's report landed hours before Finance Minister Chrystia Freeland was scheduled to kick off debate in the House of Commons on the government's budget bill introduced last Friday.

The Senate, too, is poised to start studying the legislation, having given marching orders to various committees in anticipation of its arrival next month in the upper chamber.

But first the bill has to survive the House of Commons.

The minority Liberal government would fall without the support of at least one other major party to pass the budget bill, leading to a process that would likely trigger an election campaign.

Conservative finance critic Ed Fast said the PBO report showing higher-than-projected deficits, largely due to lower-than-expected revenues, and details on stimulus shows the budget is more about politics than the economy.

"This confirms what we have feared all along. This budget is not about generating economic growth or creating jobs for Canadians," he said. "It's about pre-election spending to advance the partisan interests of the Liberal party."

Fast added the Tories would take a different approach to boost wages and help small businesses if his party was elected to govern.

Similarly, NDP Leader Jagmeet Singh tried to paint the different approach his party would take, telling reporters on Parliament Hill that more spending was needed on health care, and that the ultrarich and large, profitable corporations should help cover the cost through higher taxes.

"So we'll go to small businesses, make sure that the ultrarich, wealthy corporations pay their fair share, and that we invest in health care and supports that people need," he said.

"That's our vision that's different from the Liberals."

The Liberals have pegged their spending plans to a rebound in the labour market, which one year ago witnessed a historic drop when three millions jobs were lost over March and April 2020, while 2.5 million more had their hours plummet.

Statistics Canada will update employment figures on Friday when it releases the April jobs report, which experts expect to show a decline as renewed restrictions and lockdowns took hold in response to the pandemic's third wave.

Even with a drop in jobs in April, Giroux said the budget office still expects the labour force to be back at its pre-pandemic levels by next year, which is when the first tranche of stimulus money is supposed to move out of the federal treasury.

"And that reinforces the point that we've made repeatedly over the last several months that the $70 (billion) to $100 billion to jump start the economy is miscalibrated," Giroux said during a morning briefing with reporters, "or in other words, too much and over too long a period of time if the objective is to return labour market indicators to their pre-pandemic levels."

Giroux also said the government's ability to manage the next economic crisis could be curtailed by the Liberals' decision to gobble up expanded fiscal room with new spending items.

This report by The Canadian Press was first published May 5, 2021.