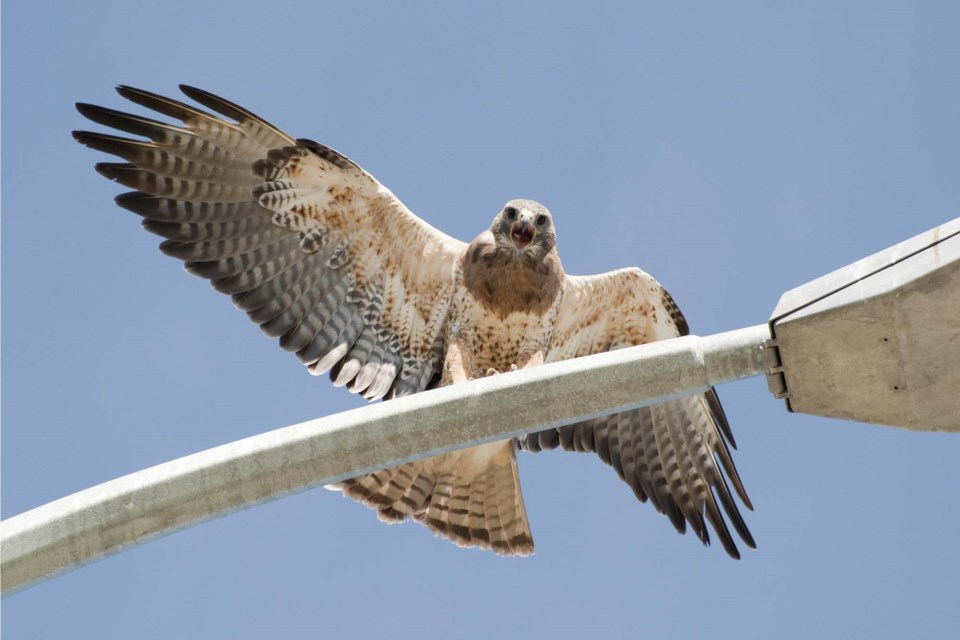 BUZZ OFF — A Parkwood resident says she was recently attacked by a hawk. Experts say the hawk was likely a Swainson's hawk such as the one shown here that was defending its nest. KEVIN MA/St. Albert Gazette

A St. Albert resident is keeping a closer eye on the skies this week after being attacked by a hawk.

Margi Russell, a retiree and long-time Parkwood-area resident, told the St. Albert Gazette a hawk attacked her on May 19 near the intersection of Pineview Drive and Poirier Ave.

The Gazette received a report from another resident of a “red eagle” nest at this intersection that same day.

Russell said she walks this area regularly and had been headed west toward the intersection when she felt the rush of wind from the hawk’s wings as it dive-bombed her twice.

“It was a big hawk,” she said, and it had a yellow beak and brown feathers on its back.

Russell said the hawk came around for a third pass and pounced on her uncovered head, causing her to stagger.

“It was like a tonne of bricks landed on your head,” she said.

“It was really, really frightening. I was terrified.”

Russell said she crossed to the other side of the street and saw the hawk looking at her from a streetlight. When she got home, she said her daughter pointed out that her head was bleeding, presumably from where the bird’s talons pierced her scalp. Russell said the hawk also assailed her neighbour that same day.

While the Gazette was unable to find a hawk or hawk’s nest at Pineview and Poirier on May 20, Russell’s testimony suggests the bird involved was a Swainson’s hawk – a species that frequents the Campbell/Parkwood region, likes tall trees and open fields (both of which are present at this intersection), has brown feathers, and occasionally dive-bombs people.

Raptors such as Swainson’s hawks will be sitting on nests at this time of year and may be aggressive in their defence of them, Prodan said. Most will simply do fly-bys to spook you; actual physical contact is rare.

He advised residents with owls and hawks in their neighbourhood to avoid suspected nest areas and keep their pets on leash. If a hawk or owl attacks you, do an about-face, start waving your arms and get out of there.

“If you see a bird start diving at you, it’s time to back off,” he said.

Expect raptors to be defending their eggs or chicks until late June, Prodan said. If you see a baby raptor outside its nest, don’t approach it unless you want a nasty encounter from its parents, who are likely nearby. Call WILDNorth Wildlife Rescue at 780-914-4118 if the chick seems to be in distress.

Russell said she would steer clear of this intersection for a few weeks and advised residents to use caution in the area.

About the Author: Kevin Ma