The Building Bridges fundraising concert for Syrian refugees will take place on Nov. 16 at 7 p.m. at the Cochrane Alliance Church.
Nov 12, 2019 3:35 PM By: Troy Durrell 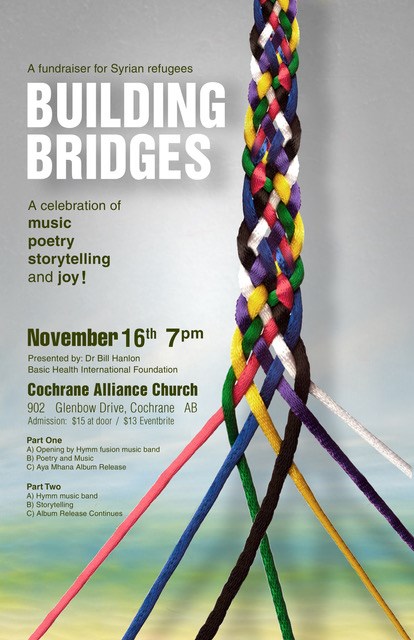 The Building Bridges fundraising concert for Syrian refugees, presented by Sr. Bill Hanlon, will be held at the Cochrane Alliance Church on Nov. 16 with the event kicking off at 7 p.m.

The concert is a fundraiser for Syrian refugees who have settled in the Cochrane and Calgary area. The evening will be a joyous mix of music, poetry, and storytelling. The music will include musicians from east and west, from Syria, Iran, Russia, and Canada.
Aya Mhana, a refugee from Syria, will launch her new album titled Homeland and the fusion band Hymm will play as well.

Mhana grew up in Suwayda, Syria, where she volunteered for the Syrian Arab Red Cross, assisting children at a refugee camp. She has an education degree and works as an elementary school teacher. She has been in Canada for 18 months. Aya performs as a soloist on a stringed instrument called an oud and also with her band.

Hymm was founded by Bijan Maysami, Soroush Rezvani, Irfan Aydogdu, and Omid Ebadi in 2015 in Calgary. Current members include: Bijan Maysami (santoor), Brent Van Dusen (percussion and drum), Aya Mhana (oud and vocal), Paya Salem (violin), Frank Rackow (clarinet saxophone), Vahid Jahanshahi (acoustic guitar), Greg Goldenberg (bass guitar), Sara Seyedi (vocal)
Hymm combines traditional melodies from around the world with modern composition to create music that appeals to a wide audience. Based in Calgary, these musicians come from diverse backgrounds to combine the musical traditions of the Middle East with influences of jazz, blues, klezmer, and western pop music. The group features the sound of the traditional Iranian santoor and the Arabic oud, combined with electric bass, guitar, clarinet saxophone, percussion, and vocals. The band offers its audiences an east-meets-west experience, with the hope that their message of peace and togetherness comes through. Their band is a shining example of how different people from different backgrounds can come together to collaborate and create something amazing. In their minds, those who create together speak one language, and that language is art.
Hymm members come from Iranian, Russian, Syrian, and Jewish backgrounds. They are all too aware of the conflicts reported in the news in these regions and like to think that they are able to show how people can come together. In their view, differing backgrounds don’t have to mean conflict, and can represent peace and what we all have in common.
Poetry will include the ancient Persian poet Saadi, Leonard Cohen and the Celtic poet Seamus Heaney. The stories will come from Syrian refugees describing their life journey and their progress on making a new life in Canada and the contributions they have made to date.
"The concert will focus on the power of human resilience," Hanlon said. "The power of the story and the power of music in reconciliation, tolerance, and growth for all of us."
Admission for the event is $13 on Eventbrite and $15 at the door.