Band names can come from the oddest combinations, as is evident with the Toronto duo Rye and Fairy Tales.
Dec 31, 2014 12:00 AM By: Cochrane Eagle Staff 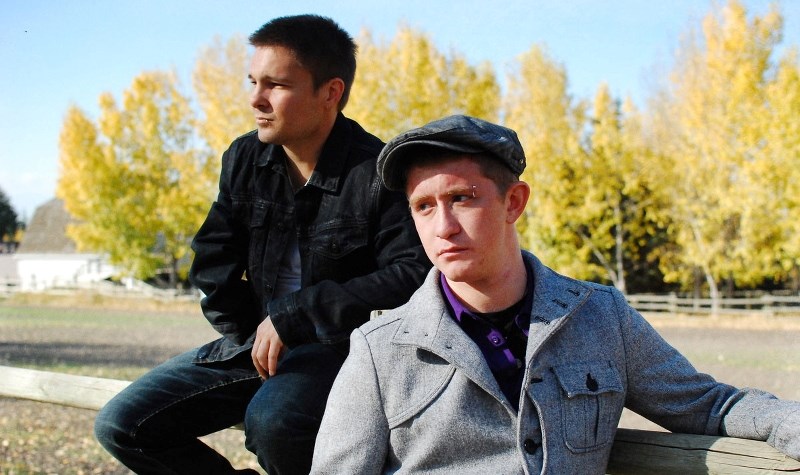 Jarred Albright and Ben Plotnick of Rye and Fairy Tales.

Band names can come from the oddest combinations, as is evident with the Toronto duo Rye and Fairy Tales.

Calgary natives Jarred Albright and Ben Plotnick make up the bluegrass pair, and according to Plotnick, the name came from a multi-day brainstorming session.

The ‘fairy tale’ element stems from their lyrical content, which Plotnick described as being about ‘far off fantasies and moments in our lives that could have been different.’

“We’re pretty big whiskey drinkers I suppose. Bourbon and Fairy Tales didn’t have as nice of a ring to it,” Plotnick said.

The two have been playing together since they were even close to being able to partake in any rye drinking, according to Plotnick, who said they were involved in a group called the Calgary Fiddlers for several years.

“It tends to develop the ear pretty early on,” said Plotnick of fiddle playing, adding that it allows musicians just starting out to hear music critically.

“I feel like in the music community there are quite a few people that I meet that started as violin players.”

Plotnick and Albright were taking freelance fiddling gigs in Calgary and, in their spare time, they began to write songs together ­– Plotnick on the guitar, Albright on the mandolin.

Two years ago they moved to Toronto, which is becoming the bluegrass capital of Canada – both continue to freelance and have become a part of the large bluegrass scene in the Ontario capital.

“It (the bluegrass scene) is very large compared to what we are used to, which was essentially none or really none to speak of in Alberta, not a big scene at all,” Plotnick said. “ But here there are a number of people that would consider themselves to be professional bluegrass musicians. There is a big circuit of people who play in town. That’s why we’re here.”

But Plotnick said Rye and Fairy Tales has a strong ‘folk-pop influence’ on their writing, which changes their sound, something that can be found on their 2012 self-titled release.

He pointed out that a lot of bands have interesting takes on bluegrass because it is relatively new when you compare it to other musical genres. Because of it being relatively new, it has been evolving and has changed a lot even in the last 20 years alone. Plotnick said people think of it as an old style because of the sound, but in the long run it really isn’t.

“It is an interesting sounding music, bluegrass. It is actually one of the newer styles of music to the extent that there is an inventor of it and you can put a year on when bluegrass was made, which compared to a lot of folk styles is pretty rare,” he said.

Although Plotnick said the duo is working pretty extensively as freelance fiddle players, they are still writing for a future recording for Rye and Fairy Tales and play in Toronto. He said to expect a release sometime in the next year or so.

You can catch Rye and Fairy Tales, along with the Pereversoff Sisters, at the Water Valley Church and Events Centre Jan. 4 at 2 p.m. For more information on the band visit ryeandfairytales.com.