Hundreds of Cochranites flocked to the library on Saturday for an day packed with stories, crafts, song and the legendary Fred Penner.
Oct 26, 2017 12:00 AM By: Troy Durrell 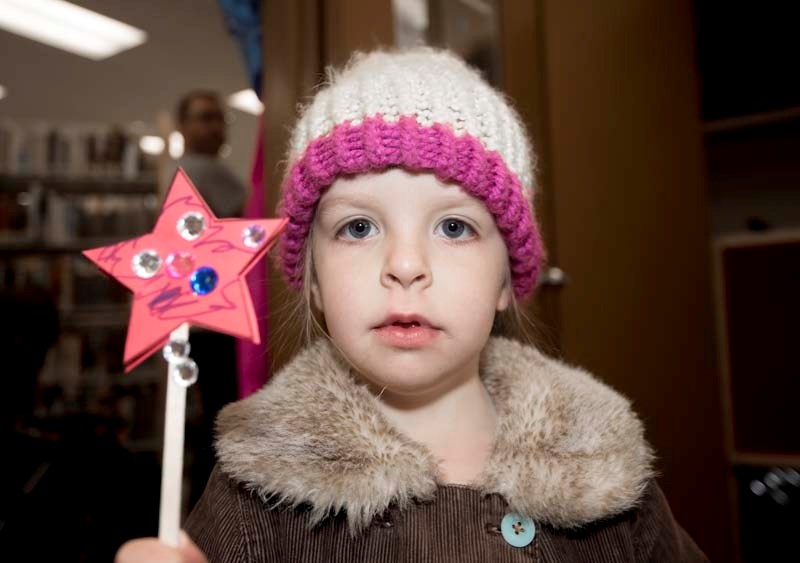 Josephine Wood, 4, holds up the wand she made during this year’s Book Bash Canadian Children’s Literature Festival at the Cochrane Public Library on Saturday, Oct. 21, 2017.

Hundreds of Cochranites flocked to the library on Saturday for an day packed with stories, crafts, song and the legendary Fred Penner.

It was all part of the 2017 Book Bash Canadian Children’s Literature Festival, which the Cochrane Public Library had the opportunity to host for its first run outside of Toronto.

Award winning authors Joan Galat and Rukhsana Khan were both present doing readings and storytelling throughout the day.

Cochrane’s own Carrie Stanton, Scottish Storyteller Calum Lykan and the St. Timothy drama students were also on hand to entertain the crowd.

A bilingual magic show added a little je nais cest quoi, and the activites were capped off by photo booth with armour-clad knights, face painting and food trucks and of course performances by Penner.

The children’s performer is known for his television show Fred Penner’s Place that aired on CBC from 1985 to 1997. He also received a Juno Awards for Children’s Album of the Year three times in 1989, 2003 and 2015.

Penner was quite excited to be in Cochrane for the event, as this was the first time he had performed in the town.

“The common goal is to bring families together. It’s suppose to get families away from technology for a while and bring them to something that has some good reality to it,” Penner said.

“It’s organic and real kind of process that brings a balance to the technology side of the world.”

Cochrane mother Kristie Lane relayed the same message, saying it was a good way to get her eight- and five-year-old sons away from electronics.

“My boys are active playing hockey and other sports, but away from school work, a lot of the down time is spent on their iPads or Xbox,” Lane said.

“My husband and I thought the event was something the whole family could enjoy, while also taking a break from staring at screens.”

Program Librarian at the Public Library, Andrea Johnston was very pleased with how well the event went.

“I think the Book Bash went very well, it was wonderful to see so many families come out and celebrate literacy with us. It was particularly special as this is a one time event for us,” Johnston said.

“Toronto Public Library started this festival back in 2010 with help of the Toronto Public Library Foundation and the Muller Scholastic Endowment Fund. Every alternate year, they open up the opportunity for one public library across Canada to host the event and this year, we were lucky enough to be chosen. It is therefore very unlikely that we’ll see this event anytime soon.”

Johnston also says they had received feedback that the library needed to be expanded.

“A lot of the comments we received about the day were not only positive, but kept highlighting the fact that our library needs space. This is really important for our new council to be aware of and for all Cochranites to push for,” Johnston said.

“In order for us to keep putting on these fabulous events we need more space.”