Hannam the husband, father and academic

Fort Macleod’s John Wort Hannam is getting too close for comfort, and it’s intentional. The salt-and-pepper haired, congenial singer-songwriter is breaking his own mantra in his latest offering, Love Lives On.
Sep 24, 2015 12:00 AM By: Cochrane Eagle Staff 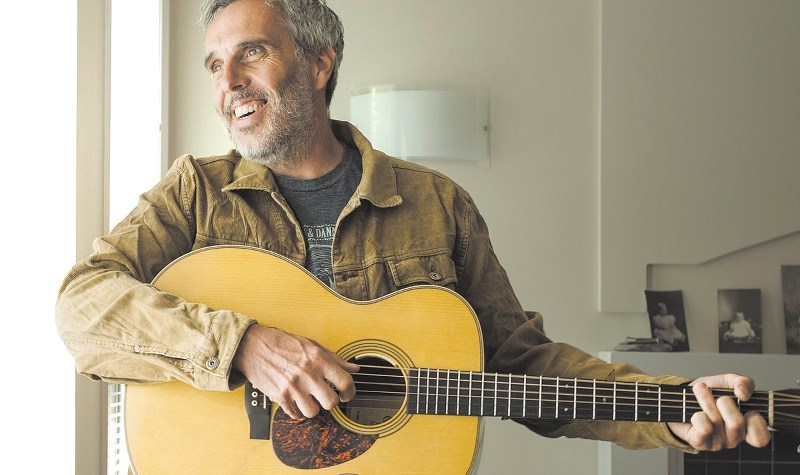 Fort Macleod’s John Wort Hannam is getting too close for comfort, and it’s intentional. The salt-and-pepper haired, congenial singer-songwriter is breaking his own mantra in his latest offering, Love Lives On.

“I used to have this rule that I wasn’t the guy who sang ‘me songs’ and I stuck pretty close to that rule. I think it’s because I’m more comfortable being a songwriter now, that I’m OK in singing about myself now.

“I think this record, more than the previous ones, gives a little insight into me as a person instead of me as a songwriter.”

Recorded over an entire year, the 11-track album was less about trying to uphold the idea of John Wort Hannam, the 13-year, Juno-nominated musician and Canadian Folk Music Awards recipient and more about Hannam the husband, father and academic.

“I think all my songs have bits and pieces of me, but I would hide behind little characters or tell a narrative in third person. There’s elements of my life in songs now that weren’t in them before.”

Although he characterized the whole album as a much more personal endeavour, three songs off the album really embody that for him.

The title track, ‘Love Lives On’, was inspired by a trip to get the mail with his young son, when they shared a tender moment while they scrawled ‘Charlie and Dad’ in a freshly laid cement sidewalk.

Hannam wrote ‘Chasing The Song’ on his 18th wedding anniversary while on the road in Oklahoma, which he admits he had forgotten. Ironically enough “a lot of that song is about my wife; she’s the one who gets left behind and wondering where I am.”

Drawing from his degree in Native American studies and nine years teaching on the Kainai Nation in southern Alberta, Hannam composed ‘Man of God’, a powerful narrative on the legacy of the Indian residential school system.

Hannam grappled with writing about such a dark and poignant period in Canadian history that he had no personal experience in.

“Am I allowed to sing this? I’m not First Nations, I didn’t go to residential school. There’s that fear of misappropriating a culture or history that isn’t even yours.”

Those questions plagued Hannam, but it was his recent entry into fatherhood and the fear of losing a child that gave him the impetus.

“I’ll never know what it’s like to be First Nations or go to Indian residential school, but I sure as hell know what’s like to have a child. Once I imagined that car pulling outside my home and church officials coming and removing your child… I knew my angle.”

The song aired on the Aboriginal People’s Television Network and was included in the closing ceremonies for the Truth and Reconciliation Commission, something Hannam is measurably proud of.

“A large chunk of my life was (undertaking) Native American studies, and for it to get included in the commission ceremony was a real honour.”

Ultimately, for Hannam these motifs represent how far he’s come – whether in his musicianship, his newfound role as a dad or coming to terms with a dark period in Canada’s history.

“I think I’ve grown as a person – I hope I have since the last record – and I wanted the record to reflect that.”

See John Wort Hannam perform with the Blue Collars at Square Butte Ranch near Bragg Creek on Oct. 4. Alongside the show, M&M Ranch is offering three-hour guided trail rides in tandem with Hannam’s album release. Tickets for the performance are $29 and can be bought at braggcreekperformingarts.com.