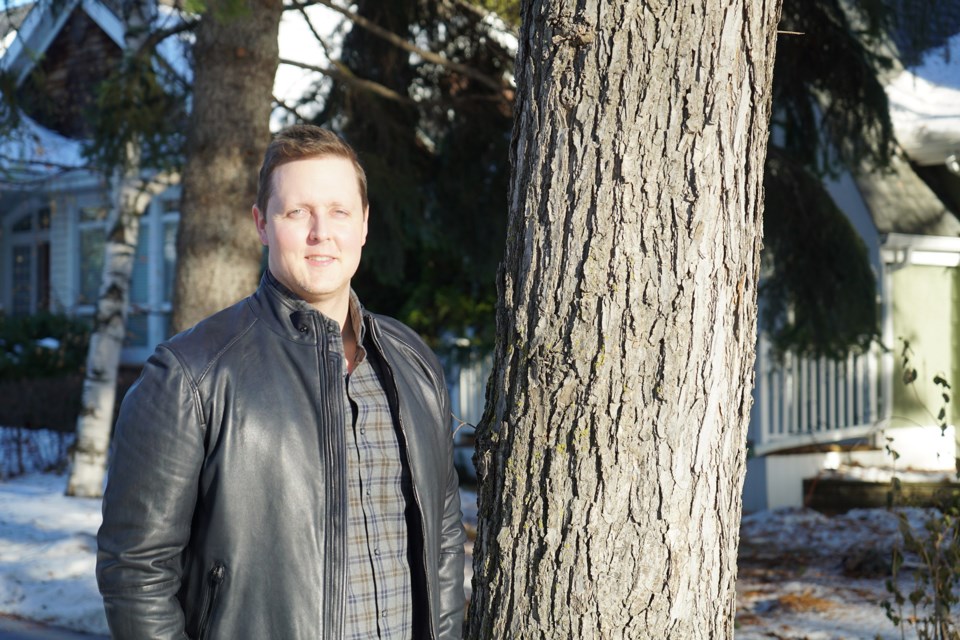 The sun is certainly shining on Kurt McLeod as principal photography on Cop Shop wrapped up only a few weeks ago. It's the St. Albert-raised financial advisor's first major Hollywood movie project, and not likely his last.

Kurt McLeod. That name will soon be in lights – you can bank on that.

The successful St. Albert-raised financial advisor wrote the original screenplay for Cop Shop, which recently completed production. While it still hasn’t been slotted for a release date somewhere on the 2021 calendar – darn that COVID – there’s nothing that could wipe the smile off of McLeod's face. Though he's tightlipped on the project, he's crossing some big bullets off of his bucket list.

"There's three things that I always wanted, really when I started thinking of all that stuff decades ago. One was to get a Hollywood film made ... with actors that you know, that's even better," he began, referring to his earlier forays into 'the industry' starting as an intern after winning a short film competition.

"Just to get a film made, that's a huge thing, a life goal that I had."

Directed by Joe Carnahan (of The Grey and Narc, who also wrote Cop Shop’s shooting script), the movie stars Gerard Butler (300 and Olympus Has Fallen) and Frank Grillo of Zero Dark Thirty and End of Watch). The story centres around a small town police station that has become a battleground between a professional hitman, a smart female rookie cop and a double-crossing conman looking to get locked up as the only safe place he can find.

The raging pandemic put a bit of a damper on McLeod getting his second wish: to be on set. Doing so could have had deleterious consequences, especially returning to Canada and quarantining for two weeks with a toddler at home.

Still, his Big #3 wish – going to the premiere – is still in the cards, pandemic notwithstanding.

"That third one is actually something that I actually have thought a lot about recently. I'm very excited when I do get to take my wife, as cheesy as it may be, and just walk the carpet. It’s a dream I've always had."

Kurt McLeod has loved movies ever since he was a kid. That love morphed from the simple joy of being a passive observer of films to wanting to be one who helped to create them.

As a young man, he enrolled in the film program at Georgetown University in Washington, D.C., where he won a student film festival. That success let him ride a wave right into Hollywood where he got an internship working for Nigel Sinclair, a British-born major producer with now-defunct production company Intermedia.

"That was kind of my segue: my entry. I did a little filmmaking program at USC, which might be familiar is pretty prominent film school in Los Angeles. I kind of got a taste of it that way. My first job was in the mailroom of one of those big agencies, like you see them make the TV shows about."

That job at United Talent Agency was akin to being a fly on the wall. It meant he rubbed elbows with the likes of Jim Carrey, Harrison Ford, Charlie Kaufman and others, gleaning what he could to further his own career and understanding of moviemaking.

"When you're working with those agencies, and when you get to be around all the folks who are really doing all the big projects, you learn a lot. That's the reason you do it. You get to absorb like a sponge not just the business but also the creative process of the best writers and some of the best directors and everything. So incredibly valuable. A lot of people who do that are actually creatives that are just doing it for that reason if you can get the job. It is pretty competitive; it's tough to get in the door at those places."

Cutting his teeth there was a real boon and he went "full bore" into the craft, thereafter achieving his Master's in screenwriting from the London Film School. He kept honing his skills and got himself an L.A. manager, working in the industry for a stretch, too.

Then, life called and he became a lawyer.

"I would be a broke artist living under a bridge if I hadn't met my wife and decided that I had to join society."

A day job doesn't preclude a night job, as is a famous Hollywood trope on its own. McLeod continued to pursue his original projects. This is only his first as he hints that others are on their way to the silver screen.

Like he says, "You never really leave the life."

"The great thing about it is you can have a job, you can have a career and still write. You don't need to train 24-7 to do it once you understand how to do it. It's a wonderful creative hobby like painting or like anything. Once I picked up the skills, once I understood how to write a screenplay and hone my craft, although ... being a financial advisor and having a busy career and a family, I'm probably not quite as honed as I once was. It's a skill that you can just continue and that you can do as a hobby, and so I've continued to do it in that way."

About the Author: Scott Hayes