Last night, a cougar crept into a rural farm enclosure south of Cochrane and killed 38 sheep. It's left the owners devastated and Alberta Fish and Wildlife have called it an "unusual" event.
Jan 22, 2019 4:40 PM By: Amy Tucker 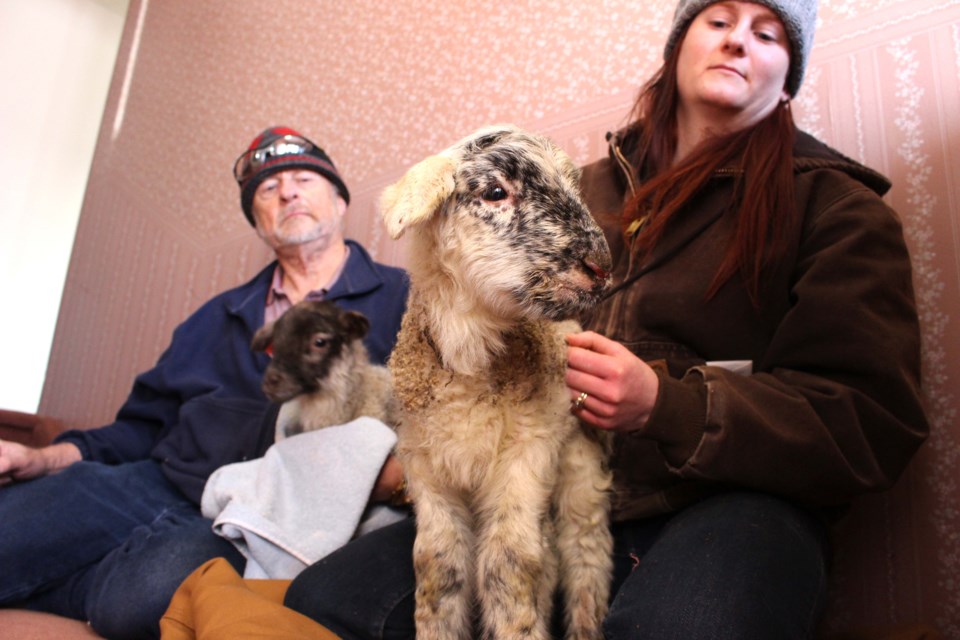 Titan (front) was born amidst the carnage. Thirty-eight sheep were killed last night by a cougar on Barry Richards (left) farm.

Last night, a cougar crept into a rural farm enclosure south of Cochrane and killed 38 sheep. It's left the owners devastated and Alberta Fish and Wildlife have called it an "unusual" event.

"You'll be alright, don't panic," owner Barry Richards cooed to the two surviving lambs now cooped up in the restroom in his home where he bottle feeds them and keeps them warm in blankets.

One of the two, Titan, now less than a day old, managed to survive despite being born amidst the carnage. The other is only a week old.

It was yesterday evening around 9 p.m. while Richards and his partner were watching a movie when Richards noticed a cougar standing on his deck.

"It was looking through our patio door window and watching us," Richards said, who has owned and operated the sheep farm since 1994.

Armed with bear spray and a shotgun, he managed to scare it off into the nearby woods – or so he thought. After keeping watch over the pen of sheep from his truck for several hours, he decided to go back into the house thinking the cougar was long gone.

"We tried to scare it off but the scent of the animals here brought it back sometime after midnight. It's quite devastating, really. I wish I just stayed down here ... I should have stayed down here."

There are ten other adult sheep remaining – none of them the babies' mothers – and they are all mostly uninjured save a few lacerations.

The corpses of the 38 dead, and uneaten sheep – 16 of which were lambs – were discovered around 7:30 a.m. this (Tuesday) morning and Richards, a neighbour who is an experienced hunter, and Fish and Wildlife officers, managed to track down the cougar and corner it in a tree.

By 1 p.m. the male cougar was shot and killed.

Matthew Visentin, a Fish and Wildlife officer, said it's unusual for a cougar to kill in mass and not eat any of the carcasses. However, in this case, the animal was sick, starving and aging and likely was drawn to the domestic sheep because it couldn't manage to hunt any of its usual prey.

"We think what happened is, once the cougar got into that small enclosed area, it just continued to kill. We don't see it very often where it will kill this much but being sick it was probably trying to get whatever it could," Visentin said.

The case of Richards' sheep is unique since it's unusual to even spot a cougar, according to Visentin.

Visentin said he doesn't believe there is any connection to the cougars spotted hunting on the outskirts of Banff townsite last week.

"Cougars are a very very specific specialized animal their brain is geared to only hunt deer, elk, fawn, that kind of stuff ... But once they figure out that it's easier to go after sheep or cattle or dogs or cats there's no changing that mindset, it's like something switches in their brain and that's all they'll do for the rest of their life."

Richards lost thousands of dollars worth of sheep – each of the ewes were worth $300 and each ram was roughly worth $500. He said he will likely get compensation from Fish and Wildlife grant funding but said he is most upset over the loss of the animals.

"Were kind of traumatized, really"