“Unfortunately, COVID-19 has no regard for other disasters that may come our way this year - and the two that we are actively preparing for at this moment are the for the flood season and for the wildfire season.” – Banff fire chief Silvio Adamo
Apr 19, 2020 9:00 AM By: Cathy Ellis 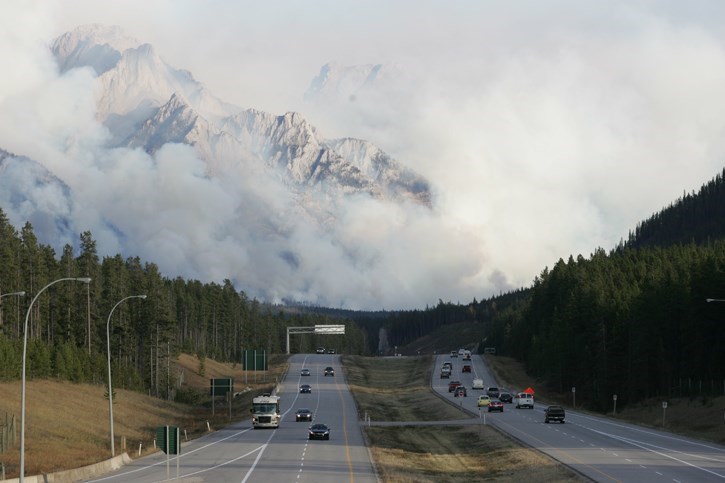 BOW VALLEY – The Alberta government is hiring 200 more firefighters, implementing a fire ban and increasing fines in preparation for the upcoming wildfire season.

Wildfires are already burning in neighbouring B.C., but Alberta officials say the new measures announced Tuesday (April 14) will help the province focus resources where they are needed in the event of multiple emergencies happening at the same time.

The government approved $5 million to hire and train 200 firefighters. More than 800 seasonal firefighters will join 370 year-round staff at Alberta Wildfire. Most new seasonal staff will be on-the-ground firefighters, with wages between $22 and $28 per hour.

In addition, a fire ban has been implemented in forest protection areas and provincial parks and protected areas. Fines are being doubled from $300 to $600 for those caught ignoring a fire ban.

“This spring, we may find ourselves facing multiple disasters at once. With all these measures, we will be prepared,” said Devin Dreeshen, Alberta’s agriculture and forestry minister.

“With Alberta’s wildfire season matching with the expected peak of COVID-19, we have to take extra precautions to ensure our response efforts are well-funded and planned out.”

The wildfire ban does not apply to the Banff townsite and Banff National Park.

Town of Banff officials said they have started preparing for not only wildfires, but for the flood season as well.

The current snowpack depth is above seasonal throughout the Bow River watershed. With rising freezing levels expected this week, the snowpack is expected to melt slowly.

As for wildfires this season, Banff Fire Chief Silvio Adamo said much will depend on weather conditions.

“I know there are wildfires burning already within Western Canada, and depending on weather and conditions, we could very likely see a wildfire season,” said Adamo.

“Unfortunately, COVID-19 has no regard for other disasters that may come our way this year - and the two that we are actively preparing for at this moment are the for the flood season and for the wildfire season.”

In the event of a natural disaster, Adamo said the municipality would likely have a unified incident command post with Parks Canada, which would manage the operations of preparing to fight a wildfire or deal with a flood.

“The incident command post would coordinate an evacuation, if necessary,” he said, noting the emergency coordination centre set up to respond to COVID-19 would still be up and running.

“It would just be another component to the response that we would be dealing with if there’s the imminent threat of a wildfire or flood, and then obviously managing the COVID-19 response. It would be a complicated time.”

Despite attempts to get information from Parks Canada on wildfire preparedness over the past week-and-a-half, the federal agency did not provide any information or interviews at the Outlook’s deadline.

Meanwhile, more than one million acres burned across Alberta in 2019 – and 71 per cent of wildfires were human-caused. More than $600 million was spent fighting wildfires throughout the province last year.

Fines are being doubled from $600 to $1,200 for non-compliance with an OHV restriction. In addition, anyone found violating a fire ban or OHV restriction may also have to go to court, where they could be issued a fine of up to $100,000.

Officials say individuals also could be held liable for all costs associated with fighting a wildfire.

“With provincial resources currently stretched due to COVID-19, these preventative measures will better equip Alberta’s response to spring wildfires this year,” said Dreeshen.

To increase response capacity and prepare for multiple and concurrent disasters, there is now provincial pandemic response planning team, which will help coordinate government’s medium and long-term response to the COVID-19 pandemic.

“Our province is taking steps to prepare for wildfires and other hazards this spring and summer by increasing our emergency response capacity,” said Kaycee Madu, Municipal Affairs Minister in a news release.

“This means that while we continue to respond to the COVID-19 pandemic, we will also be ready to respond to other emergencies as they may arise.”