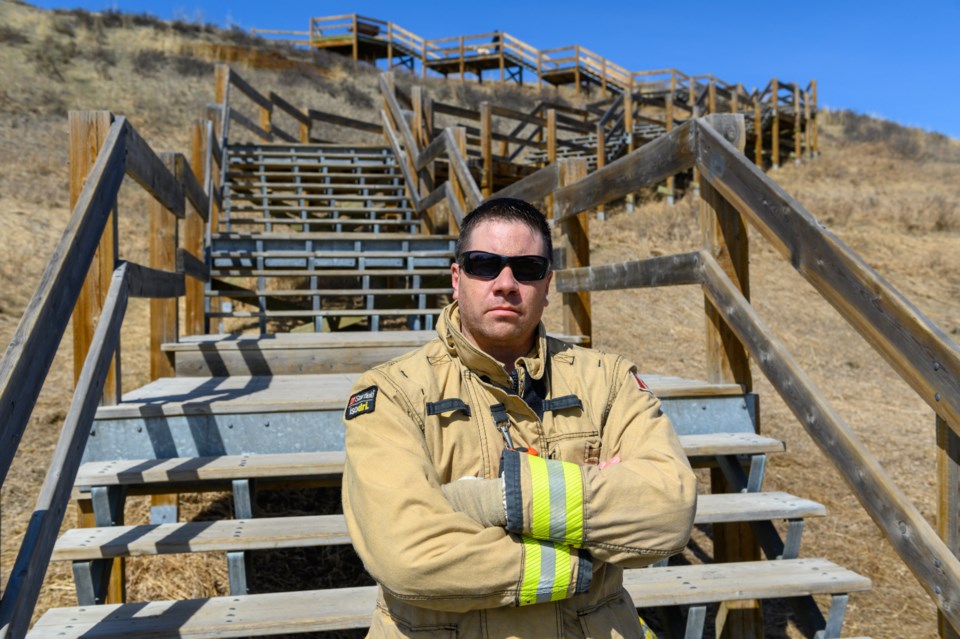 Senior Firefighter with Cochrane Fire Services Chris Chyka poses for his portrait at the base of the Cochrane Ranche stairs on Tuesday (April 13). The stairs are one of the locations available to the participants of the seventh annual Firefighter Stairclimb Challenge in support of Wellspring in Calgary. (Photo by Jack Carter/The Cochrane Eagle)

COCHRANE— The seventh annual Firefighter Stairclimb Challenge in support of Wellspring Calgary will be taking place from May 2 to 15 with Cochrane hosting one of the staircase locations.

The stair climb was originally started by Kathy Blas, the sister of fallen firefighter Gord Paul, with the proceeds going to support firefighters and citizens in the community fighting cancer. Wellspring, the recipient of the charitable funds, offers a range of supports, resources and programs to those living with or who have been affected by cancer.

The year 2021 marks the seventh anniversary of the event and the seventh time the Cochrane team has participated.

Senior Firefighter with Cochrane Fire Services Chris Chyka and his co-worker Derek Orr have been the only members of the Cochrane Team to have completed the climb every year since its start.

“We've been running it since it started, you know, some years are really good ... Other years, it's a little bit of a struggle,” Chyka said. “It's quite a task when you're running the Bow Tower, and you're standing at the bottom of it looking up. It's intimidating.”

This year due to COVID-19, participants will not be climbing the 1,204 steps of the Bow Building, instead, six competitive stair locations have been chosen across Alberta, the Cochrane RancheHouse stairs is one of them.

The Cochrane team has been training since January in anticipation of this event.

“Typically, when we start training ... We usually start in November and we start with just shorts and shirts. And we have the hose tower at our department. So that's when we start to practice. And then we add our gear, more weight, and then the tanks,” Chyka said. “Then typically just about a month before, we're running full out with all our weight. So, we're pretty much ready to go for the [Bow] tower. This year has been a little bit different. I'd say we started more so in January this year trying to figure out how this is all going to look.

“I wouldn't say we're really behind. It's just different this year.”

Chyka said it is hard to muster guys up for the event as they are extremely gung-ho on the front end and then the training starts.

“It's hard work. We're at three right now, we're hoping to get ourselves up to about 10 or so some people are just trying to make the decision. We always get a lot of people joining last minute as well... We just need to give a little bit more of a push to come join us.”

Chykra added they are very proud Cochrane was selected as a site for the Stairclimb Challenge, and firefighters are training hard for the event so they can put on a strong showing.

The gear worn during the climb is made up of all of their structural firefighting gear, including boots. Chyka noted the only thing they do not wear is their breathing mask and gloves. The average weight of the gear can be anywhere from 45 to 55 pounds.

“It is a bit of a variance in there but somewhere in that range. So, for someone like myself who starts at about 230 pounds, you add 50 pounds of gear to that just for easy math. You know you're up to 280 to 290 [pounds],” he said.

The stairs at the Cochrane Ranche consist of 90 steps, meaning the participants will repeat the climb 14 times to reach the equivalent of the Bow Building.

“It's about pace, really at that point, not exploding out of the gates and making sure that you're going with a consistent pace, our gear is meant to keep heat out. But conversely, it also keeps some of it in,” Chyka said.  “There's a lot of heat stress that we put on ourselves, it's a lot different when you're just training shorts and a T-shirt and you throw all this gear on that keeps the heat in there, and just starts sapping [your] energy right out.

Chyka said the completion times vary from a record 11-to-12-minutes to an hour.

Cochranites looking to support their local fire department during the challenge can visit the Calgary Stairclimb website and click on the donate button where they will be able to support a team or person.