One of the best in the West. It's a title the Cochrane Scouts are not taking lightly. With hundreds of Scouts organizations across Canada, the Cochrane kids are ringing in 17th in the country for popcorn sales.
Oct 4, 2018 1:00 AM By: Lindsay Seewalt 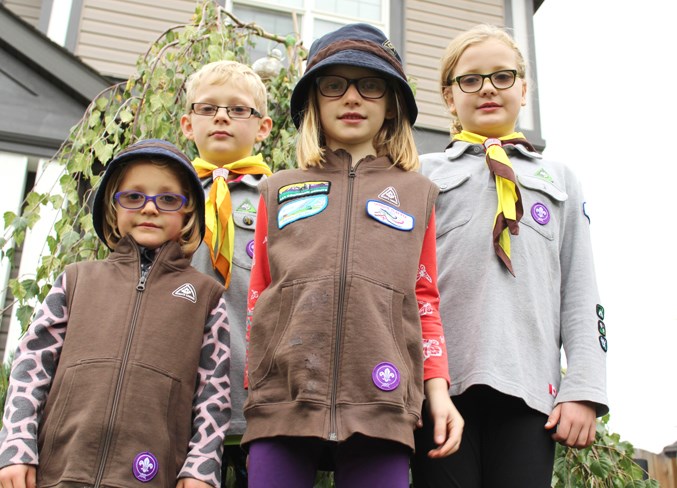 First Cochrane Scouts Julie, Cole, Sophie and Ellie Gustafson might be coming to a door near you with popcorn to purchase.

One of the best in the West. It's a title the Cochrane Scouts are not taking lightly. With hundreds of Scouts organizations across Canada, the Cochrane kids are ringing in 17th in the country for popcorn sales. It's the biggest annual fundraiser for the Scouts, where proceeds fund roughly 80 per cent of their activities, adventures and camping trips. Last year, the First Cochrane Scouts sold $37,500 in popcorn, where between 40 and 60 per cent goes directly to the local organization – what is perceived as a high percentage compared to other fundraisers. "That's a lot of popcorn. These kids have done incredible," said Julie Shackleton, Scout leader and popcorn fundraising coordinator. "We're trying to break the $40,000 mark this year. That will take us to uncharted territory." First Scouts Cochrane has two Beaver Colonies, two Cub Packs, a Scout Troupe and Venturer Company, for a total 110 members – what is considered a high membership. For the Gustafson family of Cochrane, it's a bit of financial reprieve for their four Scouts while serving as an exercise in family bonding. "The thing we like about Scouts is the scholarship program, which is huge for big families like ours," said mom Miranda with her Beavers Julie, 4, and Sophie, 10 and Cubs Cole, 8, and Ellie, 9, scurrying about in full Scout gear – venturing to neighbours' houses with popcorn sale sheets in hand. Unlike Girl Guides, who door-to-door with boxes of cookies twice each year, Scouts use order forms and bulk order. Once shipments come in, parent volunteers roll up their sleeves and help deliver the various flavoured packages. Once popcorn-wielding Scouts hit $2,500 in sales, six per cent goes directly back to the youth in the form of a scholarship fund. After that, each year six per cent of whatever amount is sold is added to the fund. Julie said she laughed when going through sales last year and coming across first-time Beaver Cole Gustafson's $3,000 sales. "I just about fell over ... we don't often have Beavers hit the the scholarship level," said Scouter Julie, adding that parents don't always realize the sales potential from young Scouts and don't take advantage of the early opportunities until later ages. Julie's son, 12-year-old Garrett, is a Scout who has held the title for five years running of highest sales, selling $3435 last year. As a single parent, Julie said the opportunity to raise dollars for education was not to be passed up. Kids who reached the $2,500 fundraising threshold also get four surprise adventure boxes with camping and survival gear and gadgets delivered throughout the year. While Scouts Canada took away the gift card incentives two years ago, resulting in higher proceeds going back to the local organizations, Julie said she and her parent volunteers opt for shoestring budget incentives – from pie the leader to silly string square offs, keeping the kids motivated to keep their sales up. She added that Scouter Larry has been a big help and dedicated volunteer leader for eight years. Miranda, also known by her Beaver name "Rainbow" and Cub name "Mang" (like the bat in The Jungle Book) said for her busy family, it works to have all her kids in the same organization. Cole was the first to enter the program and the girls followed suit this year. "I'm trying to break my record and raise $4,000 this year," said Cole. "I like it because you can go camp in cabins and we play lots of games," added Ellie. Miranda said she and husband, Colin, welcome the opportunity to volunteer in their community under the reputable name of Scouts Canada. Learn more at scouts.ca or connect with a local Scout to purchase various flavours of popcorn.