Cochrane's firefighters to be included in Phase 2C of vaccine rollout

“The role of firefighting is not just about going to fires in homes or outside in the forest, it’s certainly much more of a well-rounded profession than just that limited action.”
May 7, 2021 12:00 PM By: Tyler Klinkhammer 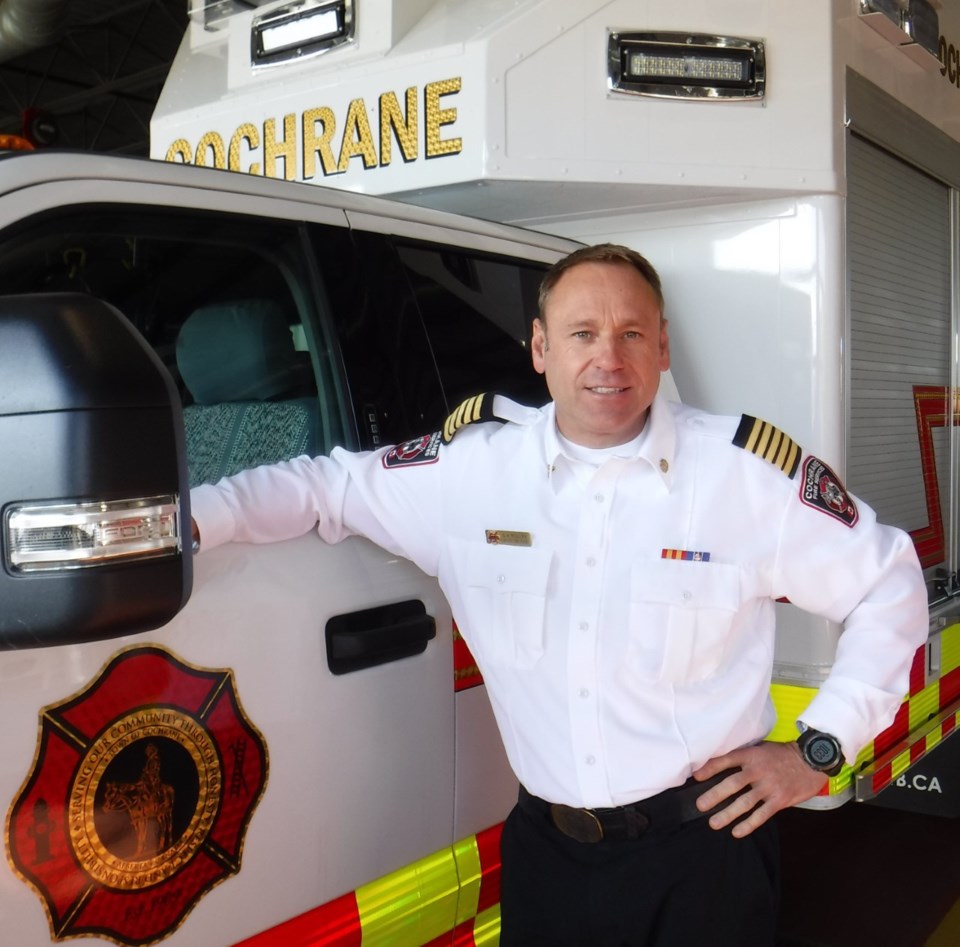 Shawn Polley, the deputy fire chief at Cochrane Fire Services since 2017, was promoted to fire chief on December 14. Photo submitted.

COCHRANE— On Thursday (April 29) the Government of Alberta announced firefighters would be among the first responders to receive vaccinations in Phase 2C of the vaccine rollout plan after initially leaving them off the list.

“Just yesterday the government of Alberta, just released that in the finishing of Phase 2 of the vaccine rollout, that firefighters are now part of the immunization list,” said Cochrane Fire Services fire chief Shawn Polley. “That’s, of course, very exciting news for all departments.”

The Town of Cochrane has been pushing for the vaccination of its fire service members since the beginning of April, when Mayor Jeff Genung penned a letter to Minister of Health Tyler Shandro on April 1.

The Town, with a coalition of mid-sized communities, sent a second letter to the Alberta government on April 19 reiterating the need for fire service members to be vaccinated.

“Mayor Genung and the Calgary Regional Board, I believe is who he had sent it through, have been supporting our local firefighters, not just in the Town of Cochrane, but in like-sized communities. They would have sent the letter to Minister Shandro and Premier Kenney, and had been working on that for quite a while,” Polley said.

Cochrane Fire Service is part of Cochrane's Medical First Response, which is the case for many fire departments across the province, in communities large and small. The Fire Service members often attend medical events with the ambulance, or in cases where an ambulance might be further out from the community and unable to respond as quickly as the Cochrane Fire Services members.

Roughly half of all of the calls Cochrane Fire Services responds to are medical in nature, Polley said.

“Because we do quite a few, about 50 per cent of our call volume, in support of Alberta Health Services and EMS, we deemed our employees front-line healthcare workers. There was an opportunity to send a letter of support that they do that as their front-line duties,” he said. “The role of firefighting is not just about going to fires in homes or outside in the forest, it’s certainly much more of a well-rounded profession than just that limited action.”

The Cochrane Fire Service members have been provided with documentation that indicates that they are eligible to receive a vaccination.

Polley said because of the nature of the issue, being that it is personal medical information, he has not asked any of the firefighters their feelings on the issue, but several have expressed that they are grateful for the support of the Town and Cochrane Fire Services’ management.

“They are, of course, quite happy to see that the employer was very strong in its language and conviction to support our team and keep our workplace safe,” Polley said.

The vaccine will play a big role in protecting the Cochrane Fire Services’ members, and is one more safeguard against COVID-19 a collection of public health measures and practices.

“COVID-19 is not only about the vaccination, that’s a big push and certainly will have a lot of value for us, but it’s part of the holistic approach. Not only are we cleaning more, we’re disinfecting the fire station and our apparatus’, we’re wearing the masks and all of the personal protective equipment that goes into place.”

Polley said he hopes those who choose to get vaccinated should be able to get their first shot within the next few weeks. Many of the members are also EMTs and paramedics and have already received either one or both doses of the COVID-19 vaccine.

Many of the educational and community outreach programs— Like fire hall visits for young Cochranites— That the Fire Service takes part in have been put on hold due to the pandemic, Polley said, and he is looking forward to the day when those programs can resume.

“It brings us a lot of joy and happiness to the staff. They love having and hosting the school kids in the station,” he said. “We hosted over 1,000 school-aged children in 2019, I think was the final stat. It’s big business here. We were super excited to have and host, and members are excited to getting back to, maybe a little different public education, but they certainly enjoy that part.”

In lieu of the traditional educational programming, the Town has set up digital tours of the Cochrane fire hall, which are available online at cochrane.ca/fireprevention.