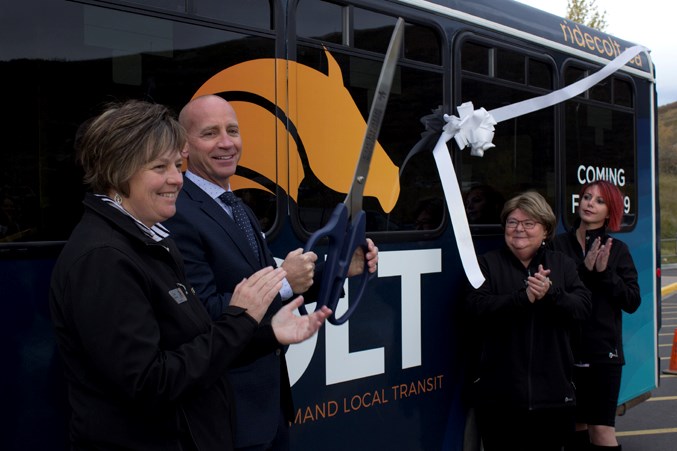 Major Jeff Genung and members of town council celebrate the cutting of the ribbon at COLT's launch at the Cochrane RancheHouse Monday morning.

COLT has galloped to town and you can be a part of the excitement.

Cochrane’s On-demand Local Transit launched their fleet of short buses throughout our community at 10 a.m. Monday morning. The COLT app opened two hours prior and already had 23 bookings for the day. After the first day there were 169 riders, 80 trips, and the average ride time (including wait time) was just over 20 minutes.

Mayor Jeff Genung said the service was the result of years of hard work and advocating from members of town council and the community.

“We’ve been talking transit for years, and now it’s a reality,” he said at the launch. He noted that COLT will decrease the number of cars on our streets and will offer independence to local residents who might not have had transportation options previously.

“The demand is there,” Genung said.

He noted that other municipalities across Canada will be taking a close look at how the service performs. COLT’s on-demand structure makes it unique among other transit services across the country. Genung said the mayor of Beaumont, Alberta and Victoria, British Columbia have already reached out to him and are requesting a play-by-play of the service, post-launch.

The service will include four, low floor, wheelchair accessible, 21-seat buses. In a few months the fleet will grow to eight buses and will be outfitted with bike racks. Presently there are 152 unique bus stops around Cochrane. Stops could be moved or added as the service is used.

Residents can access the service through the COLT app by selecting a specific day and time for a start and end point. The app will send a text message when the bus is on its way.

COLT is free to ride until the end of the year. Town council approved a fare structure which will come into effect on January 1, 2020. A single one-way ticket will cost $2.50 and a senior monthly pass is $30. Children under five years of age ride for free. Other fare options are available on their website.

The service will operate Monday-Friday from 6 a.m. until 8 p.m. and Saturdays from 9 a.m. until 3 p.m. COLT doesn't run on Sundays. Strollers, bikes and scooters can be transported. Sporting equipment is also permitted.

Riders can still use the service if they don’t have a mobile phone. Rides can be booked through the app, on www.ridecolt.ca or by calling 403-851-5995.

Local transit in the community was approved last year as part of the 2019-2021 budget. Extensive community consultation was the driving force behind the on-demand stop-to-stop service.

Buses will initially serve only Cochrane. In about six months COLT could expand to regional destinations including Crowfoot LRT station and post-secondary institutions in Calgary.