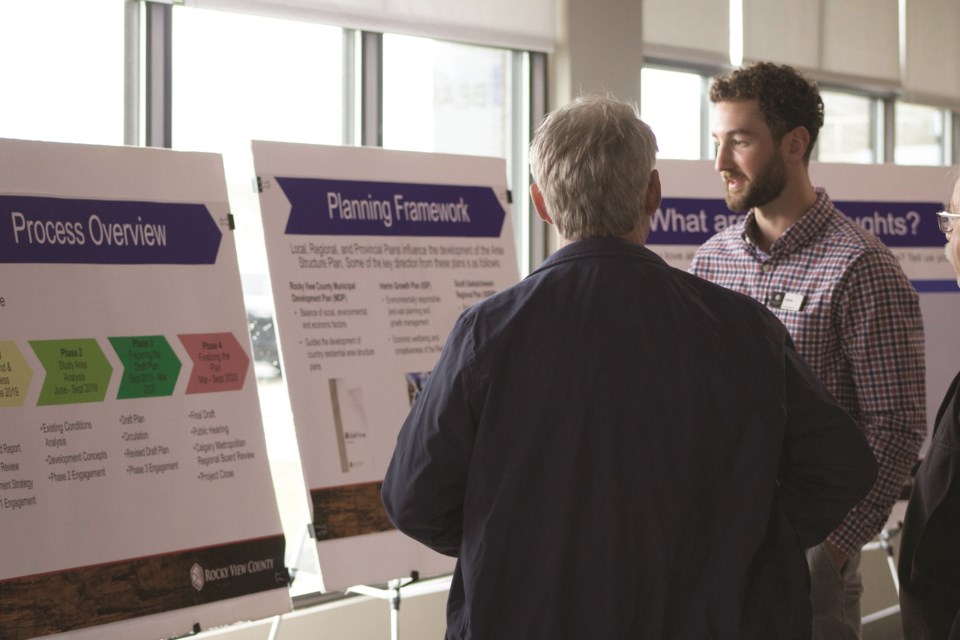 Rocky View County planners engaged with residents during a public engagement session on the Bearspaw Area Structure Plan Review Project at RockPointe Church June 6. As the next phase of the project kicks off, a second open house was held Nov. 25. File Photo/Rocky View Publishing

A review of the Bearspaw Area Structure Plan (ASP) is progressing, and Rocky View County (RVC) administration embarked on the second phase of the project with an open house at RockPointe Church Nov. 25.

“We are interested in [hearing from] as many people as possible,” said senior planner Stefan Kunz. “It is such a broad area, such a diverse area, and there’s all kinds of different folks that live in this area.”

The open house kicked off the second round of public engagement for the review project, following an initial session June 6. According to Kunz, the County hoped to confirm what staff heard from residents at the first open house and get more details on moving those desires forward with the new ASP.

“The original open house [was] really to capture broad perspectives on what residents like about the area, and what they want to see in the future,” he said. “Really, what we’re looking at right now is establishing the vision and goals for what the community wants for the future of Bearspaw.”

During the summer, RVC discovered residents placed a priority on Bearspaw’s connection to nature and wildlife in the area, Kunz said. Participants also indicated a desire for more pathways and access to alternative forms of transportation, like cycling.

“There was actually quite a mix on the appetite for development,” he added. “There’s a lot of people [that] kind of like the status quo, but there’s quite a range there.”

As the open house occurred after press time, attendance was unknown. However, based on the high level of engagement at the initial session, Kunz expected residents would turn up in droves.

“We were really blown away by the turnout [June 6],” he said. “I think there was over 200 people that actually showed up.”

RVC plans to gather additional feedback through a series of “coffee chat” meetings Dec. 3 to 6 at the Bearspaw Lion’s Club. Kunz said these meetings are a great opportunity for anyone unable to attend or uncomfortable speaking at the open house. Residents can register by calling Nadine Owen at 403-230-1401 or emailing nowen@rockyview.ca

“We want to get the most number of opinions that we can,” Kunz said. “We want to reach out to as broad a reach of the population as we can, in order to make sure that everybody has the opportunity to provide feedback.”

The current Bearspaw ASP was adopted in 1994, Kunz said, adding ASPs are typically meant to last between 10 to 15 years. With changes to the legislative environment as well as the arrival of new residents, he said the time has come to review the plan to ensure it suits the community.

“We want to make sure that Bearspaw and Glendale has an ASP that actually reflects the residents’ vision for the future,” he said.

Following this round of engagement, Kunz said, administration will return to the community in the new year and begin identifying areas appropriate for the type of development residents desire. RVC plans to have a draft of the new ASP by May 2020, with public hearings anticipated early in the summer.

Greystone development land use re-designation completes public hearing
May 27, 2020 9:00 AM