Poppy campaign kicks off next week, goal of $50K

As the Cochrane Legion Branch 15 readies to launch the annual Poppy Campaign, first vice-president Dave Usherwood said the goal this year is $50,000.
Oct 18, 2018 1:00 AM By: Lindsay Seewalt 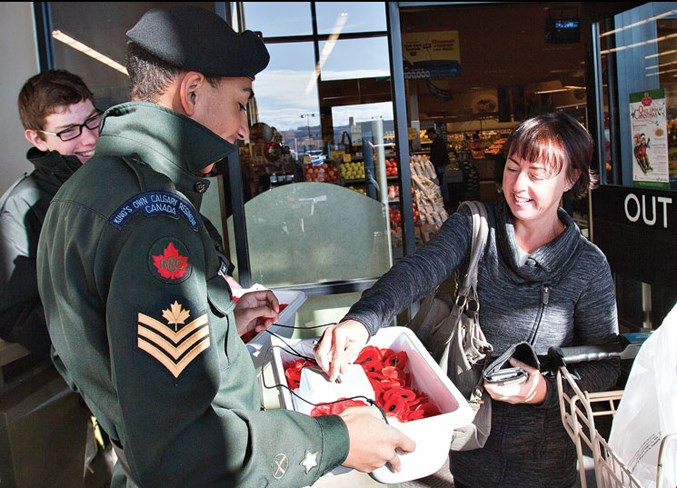 As the Cochrane Legion Branch 15 readies to launch the annual Poppy Campaign, first vice-president Dave Usherwood said the goal this year is $50,000. "The greater Cochrane and Calgary community is still dealing with the economic downturn repercussions ... we are very appreciative for all donations and the support we have received," said Usherwood, confirming that last year's donations came in just under $40,000. The poppy campaign starts on the last Friday of October each year – Oct. 26 this year. The Governor General will be pinned with the first poppy to kick off the campaign at the Military Museums in Calgary this Oct. 20. For the final weekend in October and throughout weekend days until Nov. 11, Cochranites will take note of cadets at six locations manning poppy stations – Safeway, No Frills, Walmart, Canadian Tire, Save On Foods and Spray Lake Sawmills Family Sports Centre. There will also be poppy boxes located at some 250 stores around town, including around 50 of the secure, anti-theft poppy boxes that have made headlines the last two years – designed by local EGB Manufacturing, under the direction of local philanthropist and retired celebrity wrestler Dan Kroffat. "Last year, we didn't lose one poppy box," said Usherwood, adding that the funds raised go back into the community, including support for the two area cadet programs with a combined membership of over 140 cadets – the 2512 King's Own Calgary Regiment in Cochrane and the 952 Westjet Royal Canadian Air Cadet Squadron in Springbank. The annual Remembrance Day ceremony will once again take place at the Cenotaph at 11 a.m, following speeches and the procession that begins at Cochrane High School and walks downtown, which begins at 10 a.m. To learn more contact the Legion at 403-932-2011 or stop by 114 Fifth Ave. West. Cenotaph The Cenotaph project is looking for the finishing touches in the spring/summer of 2019. Phases one and two of the park revitalization project that includes a bronze statue of a First World War soldier by local Studio West Bronze and Foundry wrapped up earlier this year. Total price tag to date, raised by the community, town and in-kind donations totalled $185,000. The next step, Phase 3, will ramp up in early 2019 and is looking to raise roughly $15,000 for park benches and a memorial plaque to capture the historical significance of the cenotaph. Usherwood said the culmination of the end of the cenotaph project corresponds with the 100-year anniversary of the end of the First World War (1914-1918). "It's the centennial of the end of World War I ... we need to remember the fallen and their sacrifices for us."