With more than a quarter century as a Cochranite, Tim Giese’s commitment to the community and the environment has earned him the Rotary Club of Cochrane’s Integrity Award.
Mar 23, 2017 12:00 AM By: Cochrane Eagle Staff 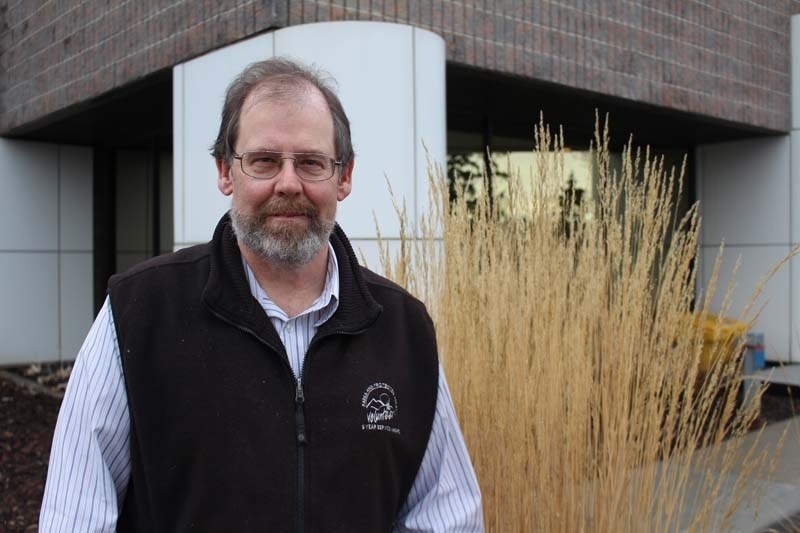 Tim Giese stands outside the NOVA Chemical Corporation at 16 Street NE in Calgary, Alberta on March 22, 2017. Giese was awarded with the Integrity Award from the Rotary Club of Cochrane for his multitude of volunteer efforts such as his role of president at the Cochrane Environmental Action Committee.

With more than a quarter century as a Cochranite, Tim Giese’s commitment to the community and the environment has earned him the Rotary Club of Cochrane’s Integrity Award.

“It always nice to receive those acknowledgments, you never do this stuff to get an award, you do it to make the community a better place, so to be recognized is special,” said Giese, president of the Cochrane Environmental Action Committee (CEAC).

The 62-year-old’s work with the committee has involved hosting seminars for environmental awareness, organizing conferences, promoting the yearly Earth Hour event, and establishing the Cochrane recycling depot. Through Branches and Banks Environmental Foundation, Giese has also been instrumental in helping to plant more than 35,000 trees with the help of 3,000 volunteers since 1996.

“I’ve been doing a lot of this stuff for a long, long time,” said Giese.

Beyond CEAC, Giese’s volunteer work also includes building trails with the Friends of Kananaskis Country, assisting at the seasonal Cochrane Farmers’ Market, and mentoring through programs such as Seniors for Kids Society and Big Brothers Big Sisters, among more.

“He is a committed environmentalist who believes it is possible to change the world one person at a time through education and encouragement,” said Margaret Peach in her nomination for Giese.

“His influence has been so pervasive in this community.”

Giese also recently exceeded 750 plasma donations with Canadian Blood Services, becoming one of the highest contributors in the country.

“There are only a few Canadians up in those ranks,” said Giese.

Though born in Calgary, he has moved all across Canada – from the east coast to Vancouver – receiving a bachelor of science in applied chemistry from the University of Waterloo in 1978 before becoming a analytical chemist at NOVA Chemicals Corporation in Calgary.

“Part of the reason he is respected as a leader is because he is also a very willing worker, whether that is organizing a conference on sustainability or pulling weeds in Caroline Godfrey Park,” said Peach.

Since moving to the town 27 years ago, Giese “fell in love with Cochrane,” and its “strong sense of community.”

“I get very inspired by other volunteers,” said Giese.

Despite long hours as an analytical chemist, he still manages to make time to volunteer and help improve the community of Cochrane.

“Find the right balance between home life, community life, and work life, make sure one doesn’t dominate too much,” said Giese.

“I enjoy what I get out of all of them.”

Giese, who was among six candidates for the award, will be honoured at an event on May 13 at the Links of GlenEagles.