There are only a handful of tickets remaining for this year's Community Builders gala to honour one of Cochrane's own – Alex Baum.
Apr 4, 2019 1:00 AM By: Lindsay Seewalt 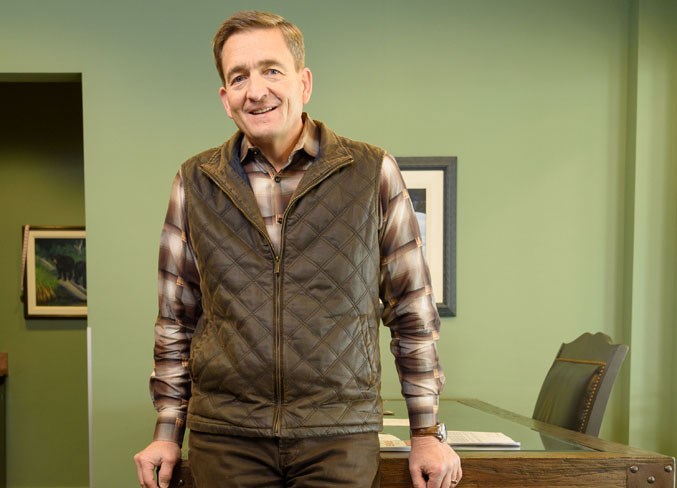 Alex Baum poses for a photo in his office at Cochrane Toyota in Cochrane, Alta. on Friday, March 29, 2019. Baum will be recognized at the 2019 Community Builders Night. (Photo by Nick Olexyn/ Cochrane Eagle)

There are only a handful of tickets remaining for this year's Community Builders gala to honour one of Cochrane's own – Alex Baum.

The response to the soon-to-be sold-out June 2 gala has been "overwhelming" and event organizer, philanthropist and retired celebrity wrestler Dan Kroffat, said it speaks volumes about the chosen honouree and how he is valued by the Cochrane community.

Baum is a Rotarian and owner of Cochrane Toyota who has been a major supporter of countless community causes.

"What is it that makes people community builders? For me, the criteria is individuals who make a difference in the community – changing people's lives and asking for nothing in return," said Kroffat, citing past honourees – late Cochrane Eagle publisher Jack Tennant and famed Calgary Flames trainer Bearcat Murray as meeting this criteria.

As he readies to host the annual tribute dinner for the third year, Kroffat explained that the success behind the event has three key elements – recognition of a community leader; partnership of organizations; and a worthy cause.

"All of them would prefer to stand in the shadows then be in the forefront," said Kroffat, adding Baum is "so humble ... he avoids the spotlight and prefers to do great things from behind the curtains."

The proceeds from this year's tribute are going toward a local, long-standing organization – the Girl Guides of Calgary and Area, who lost its Camp Jubilee playground in the epic 2013 flood.

Last year, the first phase, the natural ropes course and teen adventure park, was built; the second phase in the playground, which is currently being fundraised for; and the third, future phase is an outdoor amphitheatre.

With a cost to build the fully inclusive and accessible playground on higher ground at the south Cochrane location coming in around $700,000, three major fundraisers – this community tribute dinner, the Outhouse Races and the Monumental Tournament of Aces – have a combined goal of at least $125,000 to help rebuild of the playground.

"We're looking for eight to 10 high-quality  auction items," said Tracy Brooker, Girl Guider and Rotarian who is on the tribute dinner organizing committee. "The call is out and we're looking for donors and sponsors."

The event is on June 2 at the Cochrane RancheHouse and includes a catered dinner with celebrity appearances, entertainment and tribute remarks from friends and family.

"Fingers crossed that Kailee Humphries and family members will be in attendance," said Kroffat of the Olympian bobsledder. He also has a few other celebrity invites in the works, to be confirmed in the coming weeks.

Shelly Kramer, realtor with Royal LePage Integrity, donated the venue and Gary Sartorio, owner of the future GM dealership being built in the west side of Cochrane, provided partnership of the meal along with Lina's Italian Market & Cafe in Calgary.

"Sponsorship and donation – our arms are wide open ... let's make a difference to our Girl Guides, who I know are our future leaders. Let's be there for them, as they will for us," said Kroffat.