"The excitement level kind of revolves around the two-week forecast ... once the 14-day forecast came out and showed the temperature will be hovering around zero during the weekend of the tournament, it's kind of been all smiles from us."
0
Jan 22, 2020 2:30 PM By: Troy Durrell 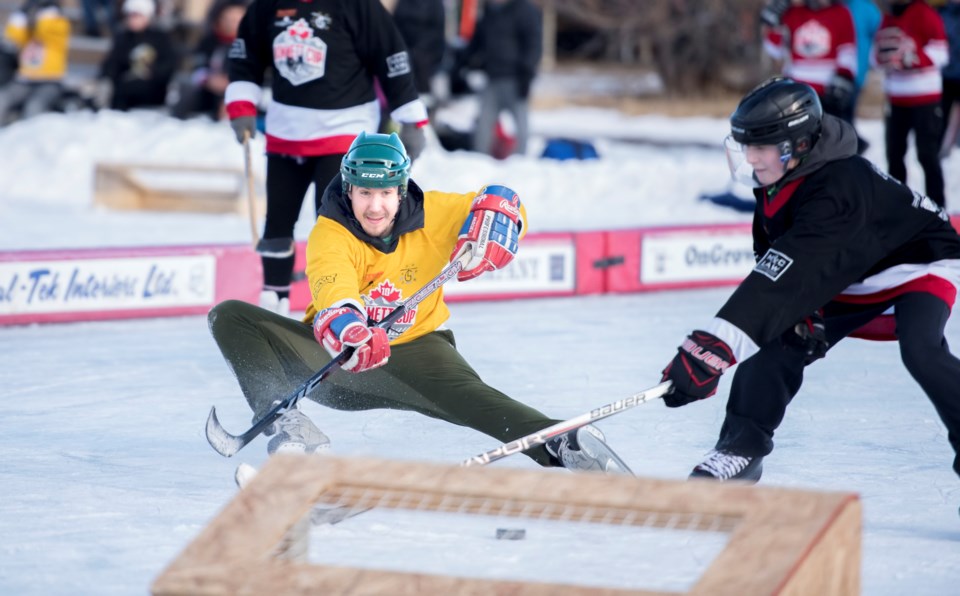 Curtis Matwishyn, left, attempts a shot on goal during the 10th annual Kimmett Cup Tournament at Mitford Pond in Cochrane on Saturday, Jan. 20, 2018. The tournament is in honour of Lindsay Kimmett, who died in a motor vehicle collision in 2008. The tournament is now going into its 13th year. File Photo

The 12th annual Kimmett Cup tournament is set to get underway in just over a week's time, with games scheduled to begin on Jan. 31 and run until Feb. 2.

The three-on-three pond hockey tournament will take place at Mitford Ponds and Spray Lake Sawmills Family Sports Centre. The Kimmett Cup benefits the Lindsay Leigh Kimmett Memorial Foundation, a non-profit organization that was started after her death in 2008.

"It looks like we're going to be running with 42 teams on the adult event," said Kimmett. "Then another 10 teams in the kid's event on Sunday."

"The excitement level kind of revolves around the two-week forecast ... once the 14-day forecast came out and showed the temperature will be hovering around zero during the weekend of the tournament, it's kind of been all smiles from us."

"Sponsorship has been great, fundraising toward this year's charity, the Children's Cottage, and Children's Wish Foundation is really starting to gain some momentum over the last couple of days here so we're really looking forward to it, getting out enjoying a beautiful day with friends and family while remembering my sister at the same time."

Kimmett also commented on the fact that the excitement level from the people who play in the tournament continues to grow as the years go by.

"Yeah we certainly see the excitement level from people and that's where we see new teams coming from year after year," Kimmett said.

"People who played on a team with friends and family the prior year, they had such a good time and decided to extend the invitation to more friends and family. Organically the tournament has grown and sustained itself that way and I think it's a testament of how people feel about the event."

With this being the 12th year of the tournament, the Kimmett family believes they owe it to Lindsay to continue helping out people in need.

"For me personally, in some ways, I think I owe that to my sister," Kimmett said. "She wanted to do good things for other people in her life ... she wanted to become a doctor, she was going to medical school to do so and that was going to be her tool to do so. The Kimmett Cup is a way to improve and make an impact on people's lives and in that sense, she's never really gone and is still impacting people."

For those interested in volunteering for the event, all the information is at www.kimmettcup.com.