The Airdrie Cochrane Athletic Association has announced its coaching roster for this coming season.
Jul 11, 2020 12:00 PM By: Tyler Klinkhammer 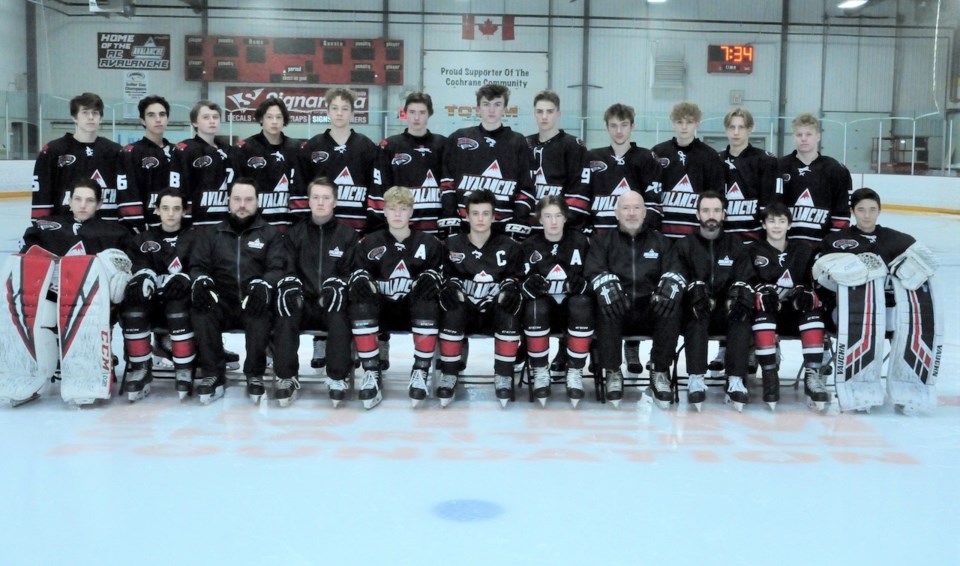 The 2019 - 2020 AC Avalanche. Coaches, in the front row, from left to right: Rob Kenney, Kris Keller, Terry Sydoryk and Dylan Sutton. Keller, Sydoryk and Sutton will be returning for the 2020 - 2021 season, while Kenney has moved on to a new opportunity in B.C.

COCHRANE— Facing off against the uncertainty created by the COVID-19 pandemic, The Airdrie Cochrane Athletic Association has announced the head coaches for the 2020-21 season.

The Association announced the head coaches on Monday (June 29).

Despite the disruption of the COVID-19 pandemic, athletic organizations are moving forward with their seasons after new guidelines from the province allowed a return to play.

The Airdrie Cochrane Athletic Association is no exception and has announced its coaching roster for this coming season.

Tyson Soloski will be returning this year for his second year as the head coach of the U15 AAA Airdrie Xtreme.

Soloski spent two years as an assistant coach in the Midget AA league before accepting the position of head coach with the Bantam AA Bow Valley Timberwolves.

He then moved on to a head coach position with the Midget AA Timberwolves. In that position, Soloski led the team to the North Divisional Championship and took home the gold.

Soloski was selected to be an assistant coach in the Alberta Cup this year, but the COVID-19 pandemic made the tournament impossible.

David Chamberlain will be stepping into a new role within the Airdrie Cochrane Athletic Association this year.

Chamberlain was previously a coach for the Airdrie Bisons but will be stepping into a head coach position for the inaugural season of the U16 AA team.

On top of his coaching experience, Chamberland was the Director of Hockey Operations for 8 years and President for 2 years with Crowfoot Minor Hockey and the Director at Large with the North West Calgary Athletic Association and Calgary Minor Hockey.

Terry Sydoryk will return for his third consecutive season as the head coach of the AC Avalance U16 AAA team.

Before the untimely end of last season, Sydoryk and the AC Avalanche were set to compete in the league provincial tournament after winning the silver medal in the South Sutter Cup qualifying tournament.

Sydoryk has more than a decade of coaching experience, nine of which he spent at the Minor Midget AAA level.

He has taken many teams to regional and provincial tournaments. Some of his accolades include winning the Sutter Cup League Championship in 2013 with the AC Avalanche and participating in four separate Alberta Cup tournaments as a head or assistant coach.

The Airdrie Cochrane Athletic Association is welcoming back Dustin Taylor as the head coach of the Bisons this season.

This will be Taylor’s third season as head coach with the Bisons, and his fourth season with the club.

Prior to his current position, Taylor was the Assistant Coach and Video Coach for the University of Alberta Golden Bears for two seasons. With that team, Taylor and the Golden Bears won the Canada West Championship in 2017.

Taylor also holds a Masters of Coaching degree, which he earned from the University of Alberta.