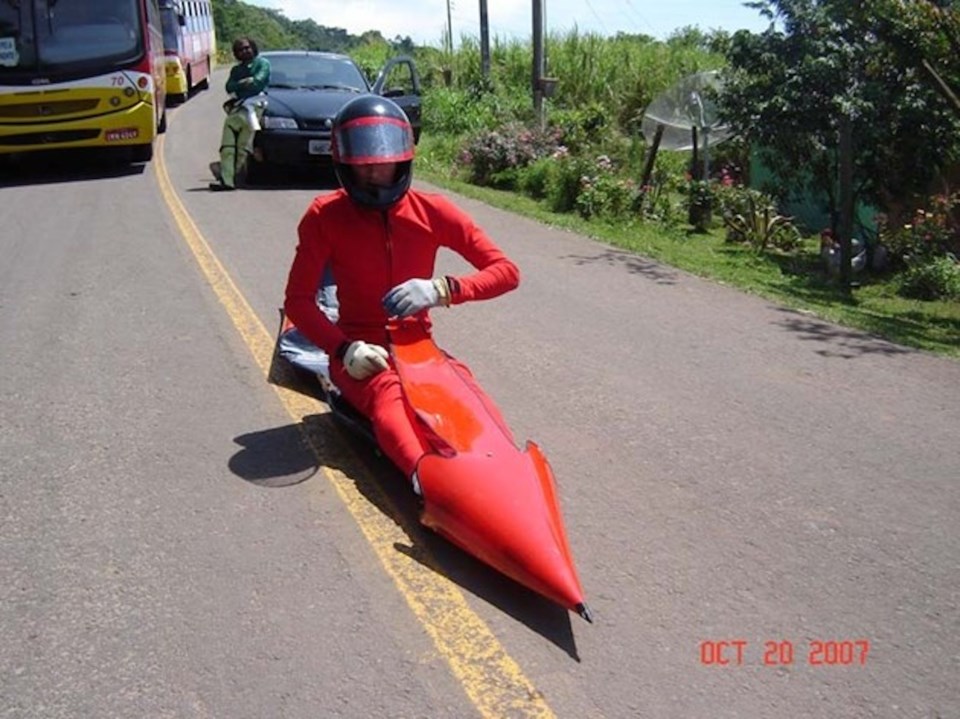 Ross Baradoy will be showing off his skills at the 2019 World Roller Games in Barcelona.

Former local Ross Baradoy is bringing his Cochrane roots to the 2019 World Roller Games June 29 to July 14 in Barcelona, with Baradoy competing for Team Switzerland in the street luge portion of the event July 5 to 7, which qualifies under skateboarding.

The World Roller Games will see more than 4,000 athletes in action and will crown the world's best in 11 very diverse disciplines such as alpine, artistic, roller freestyle, downhill, inline freestyle, inline hockey, rink hockey, roller derby, speed and skateboarding. The scooter will also make its debut as the new World Skate discipline in the 2019 edition. The Games will be used as part of the qualifying event for some of the sports to go to the 2020 Tokyo Olympic Games.

"My sport (street luge) will not be going to the Olympics, so we're using this as a showcase to hopefully get the Olympic committee interested in our sport and maybe use it for future Olympics," Baradoy said when asked about potentially making it to sports highest stage. "This is more of a test event to hopefully gauge and garner enough interest for the 2024 Summer Olympics where street luge will hopefully be involved."

Baradoy said he is still excited to be participating in the World Roller Games despite not having the chance to take part in the Olympics.

"I don't race that much anymore and basically the only reason why I'm going is because there isn't anyone else in Switzerland who races ... I'm a Swiss citizen now so now I'm riding for Switzerland. I've paid my dues over the last 15 years and now they're paying off ... maybe I'm an old guy, little bit rusty but I have some tricks up my sleeves and I'm optimistic going into the race because I believe I have better technology. People don't tinker or try new things like me but an advantage I have is that I'm still running some parts that are manufactured in Cochrane."

"All my equipment for the race this weekend is from Hunterwood Technologies in Cochrane. They made my seat and handle bars. When I was working at the coffee shop in Cochrane during my younger years, I contacted them and they invited me to their shop and helped me build my first street luge board."

Baradoy grew up in Cochrane and got into the street luge scene at a very young age. “I don’t live in Cochrane anymore, but I distinctly remember going down the hill over by GlenEagles back in 1998," Baradoy said in a previous interview with the Cochrane Eagle. "My mom would drop off my friends and I at the top of the hill, and we’d ride our boards down to the bottom of the hill.”

Street luge is actually illegal in Canada as it is considered a form of stunting, so Baradoy packed up his belongings and is now living in Switzerland full time, where street luge is welcomed.

The sport itself actually has very little relation to its winter namesake luge. It is a gravity-powered activity that involves riding a street luge (or sometimes referred to as sled) down a paved road or course.

“Street luge looks scarier than it actually is.” Baradoy recalls. “It is fast, but you’re fairly stable and you have brakes on your feet."

With Baradoy being an ambassador of street luge, he said the hope is that it will one day be in the Olympics, even if he won't be participating.

"Olympic athletes are a very special breed. You have to be extremely driven in order to reach that point. Ten years ago I would have said yes but over the course of your life, things change," Baradoy said. "I'm now 35, married with kids and I'm just not willing to make that sacrifice at this point in my life. I do hope that it eventually becomes a world wide sport and finds its place in the Olympic Games."