“I’ve said for the last bunch of years that if you get kids on bikes and get them hooked on bikes young, and show them the community around bicycles, and what it can involve it will keep them out of trouble later on. I’ve kind of always had that mindset, I want kids on bikes so they’re not bored, because bored kids get into trouble.”
Jun 7, 2021 12:00 PM By: Tyler Klinkhammer 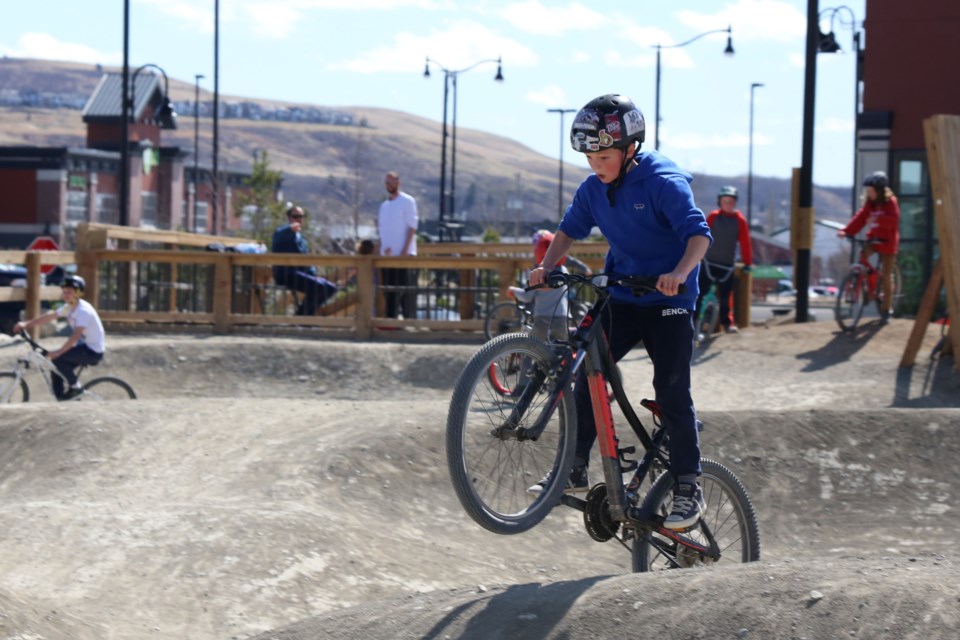 COCHRANE— The Bike Cochrane Society has restarted its youth programming with a mountain bike camp hosted on Tuesday nights.

The program originally started at the beginning of May but was quickly shut down due to provincial health guidelines.

“Everybody was disappointed, but I think we all saw it coming,” said Ryan Hopping, youth program coordinator with Bike Cochrane.

Hopping began competitive mountain bike racing in 1997 when he was a teenager and has been racing ever since.

Around 2014 Hopping began coaching other riders at the Canadian Sport Institute, which ran out of the Olympic Oval in Calgary.

“I wanted to start something a little more, I don’t want to say grassroots, but maybe community-based that could develop into more high-performance stuff, but my big thing was that I wanted to get kids on bikes,” he said.

Hopping got involved with Cochrane BMX, and while working with the riders there, he was thinking of ways to get them interested in mountain biking as well.

When COVID-19 swept through the province, and interrupted youth sports programs everywhere, a lot of the kids at Cochrane BMX naturally transitioned to mountain bikes, Hopping said.

“COVID kind of did that naturally, a lot of kids found mountain bikes last year,” he said.

The youth mountain bike camp is the result of Hopping’s continued efforts to see more kids getting into the sport.

“I’ve said for the last bunch of years that if you get kids on bikes and get them hooked on bikes young, and show them the community around bicycles, and what it can involve it will keep them out of trouble later on,” Hopping said. “I’ve kind of always had that mindset, I want kids on bikes so they’re not bored, because bored kids get into trouble.”

Hopping said he kept repeating his mantra of getting kids on bikes until someone from Bike Cochrane took notice.

He pitched the idea to the board, and Bike Cochrane’s youth mountain bike camp began.

Hopping teaches the kids in the program everything from basic bike handling skills to cornering, climbing and descending hills and more general mountain bike skills.

Hopping said the transition to coaching was tricky, but over the years he’s discovered how to effectively teach the kids the skills they need to be safe and maximize their fun on two wheels.

“I’ve found ways that work, but I will say my racing background, I had to take a really big step back from that. It took me a long time to figure out how to coach. Doing things at a high level, and doing things efficiently is different than being able to break it down and coach it. I spent a lot of time, and did training courses and stuff like that, to figure out how to break things down and coach them effectively.”

Hopping said his ultimate goal for the program is to grow the youth cycling community in Cochrane, and to see more kids on bikes.

“I want to have these kids hooked on mountain biking, and I want to develop more of a youth riding community in Cochrane,” he said. “Mountain biking is an activity that has still been able to more or less run, and the global bike shortage is kind of a testament to that because everybody is out buying bikes now. If we can have some structure and establish this community with young kids, hopefully even once other programs start opening up they keep bikes in their minds.”

Registration for the camp is full, but Hopping said that there are plans in the works to host more camps in the future.