"It's touching and important to them. You start to hear the stories as the boys start talking a little more so obviously there's an emotional aspect to that and excitement to be able to give back."
Nov 8, 2019 1:45 PM By: Troy Durrell 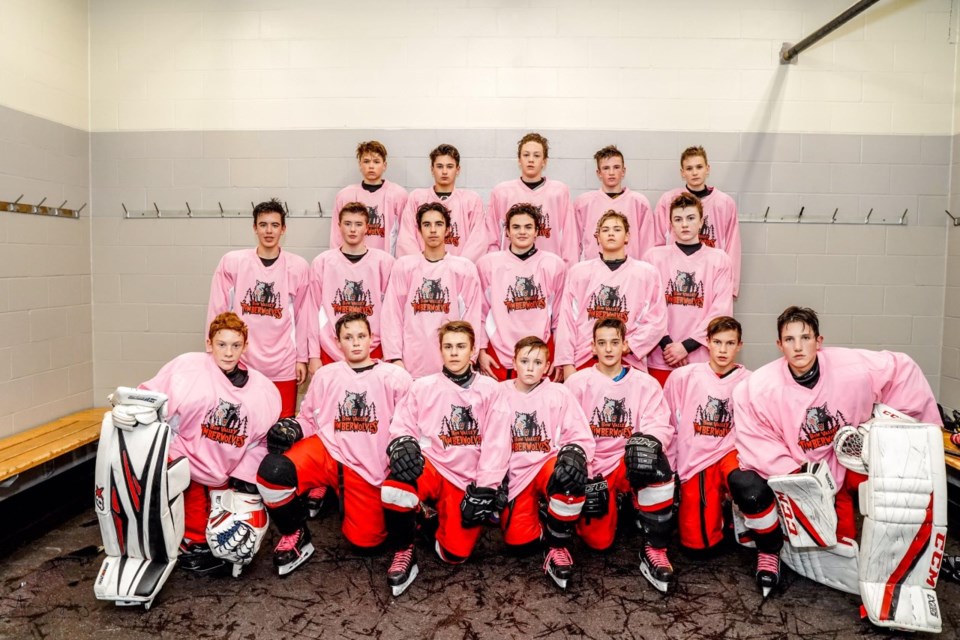 When the Midget AA Bow Valley Timberwolves hit the ice during their home game on Nov. 9 against the Taber Golden Suns, they won't only be fighting for a victory.

The team is taking part in their second annual Pink the Rink game, an initiative that supports breast cancer patients and survivors.

"This is our second year. Last year it was very much a last-minute thing that (head coach) Dave Chamberland and myself got together on and decided to donate all the 50/50 proceeds and accumulate that with the Pink in the Rink event," said T-Wolves manager Sheryl Calahasen.

"We once again have been collecting and all the proceeds through the 50/50 are going to the Canadian Cancer Society in support of breast cancer research. We understand that breast cancer awareness month is in October so we took all the proceeds from games we had in October, but we're also going to include Nov. 9. We are also going to do breast cancer scratch tickets prize that is yet to be determined but anything that we raise from that event will be going to support breast cancer research. Last year people were donating $5 here, $10 there and the winner of the 50/50 from last year donated their winnings back as well."

"Last year we raised $1,200 and this year we're looking to do the same or higher. We're having a representative from the Canadian Cancer Society come to do the ceremonial puck drop as well as accept the cheque."

Calahasen said the beginning of the event actually started because of the players trying to do their best to raise awareness for breast cancer.

"It started off with a number of kids on our team, all the boys were doing the pink hockey tape. It wasn't really a plan, it was the boys doing their usual pink thing in October and the coach saying 'we should do this'. He decided to order pink jerseys for the moms as a surprise. He went and bought all these jerseys with money out of his own pocket, we got the OK to wear them through Cochrane Minor Hockey and the boys presented their jerseys to their moms. It just was a snowball effect, we didn't plan for it. It just kind of happened and turned into this," Calahasen said.

"So this year we got on top of it, the pink jerseys have arrived and we're doing them again and we're going to decorate the rink up in pink and hope as many people show up in order to show their support and give some donations to a great cause."

Calahasen, who doesn't actually have a son on the team, said this game is especially important to the players because everyone has been affected by cancer in some way or another.

"The boys are really excited to bring awareness to this," she said. "All of us in some way has been affected by cancer and so it's emotional ... some boys are excited to put on the pink jersey and that type of thing but others, for example, we have one boy on the team whose dad passed away from cancer as well as our goalies' grandma I believe. It's touching and important to them. You start to hear the stories as the boys start talking a little more. So obviously there's an emotional aspect to that and excitement to be able to give back."

Even if you can't attend the game and would still like to donate, you can contact Calahasen at 403-835-3521 or csheryl@shaw.ca. Puck drop for the game will be at 4:15 p.m. at the Cochrane Arena.