After posting an 11-0 record at the University of Alberta, Cochrane goaltender Kirsten Chamberlin has received an invite to Program of Excellence goaltending camp on June 6 to 8 in Calgary.
0
Jun 4, 2019 1:00 AM By: Troy Durrell 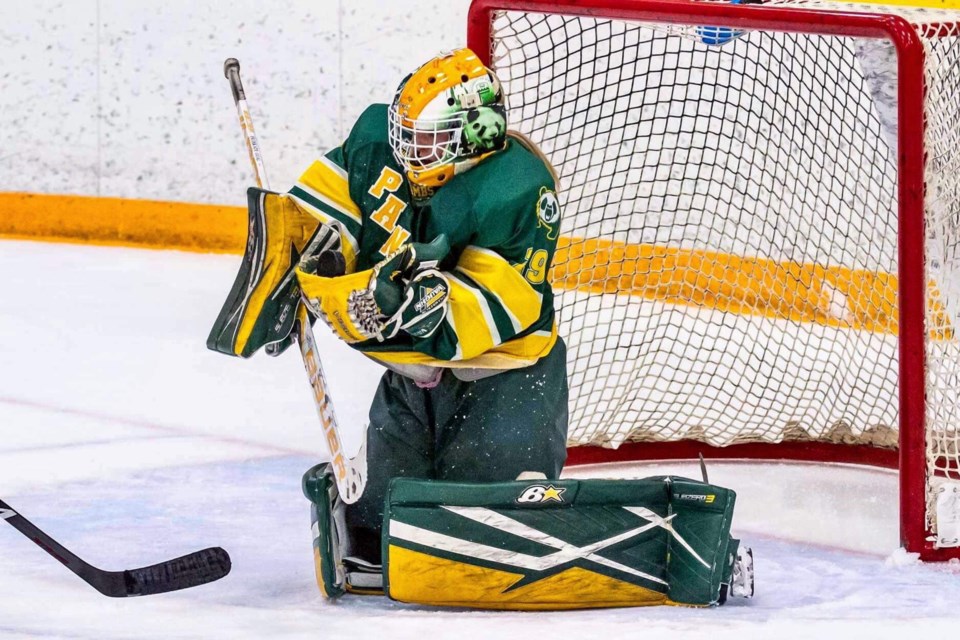 Cochrane goaltender Kirsten Chamberlin has been selected to take part in a Hockey Canada goaltending camp on June 6 to 8.

Cochrane-born and current University of Alberta Pandas goaltender Kirsten Chamberlin was one of the 20 women selected to the Hockey Canada National Women’s Team & National Women’s Development Team Program of Excellence goaltending camp on June 6 to 8 in Markin MacPhail Centre at WinSport’s Canada Olympic Park in Calgary.

The camps bring together the top goaltending talent and elite-level instructors from across the country. They serve as the initial evaluation stage for summer development and selections camps for Canada’s national teams.

“We are excited to welcome 20 of the top goaltenders in the country, and to continue to develop the strong talent pool of goalies in Canada,” said Gina Kingsbury, director of women’s national teams for Hockey Canada in a news release. “Having all our athletes from the under-18 level to the national team work with the same group of elite coaches provides consistency to our program and allows for development at all ages of the National Women’s Program.”

Chamberlin, who posted sparkling numbers at the University of Alberta going 11-0 on the season with a 0.57 goals-against-average, a .963 save percentage and six shutouts while going 21-2 over her last two years said she was surprised she got invited to Hockey Canada's camp.

"Honestly, at first I was quite surprised," Chamberlin said. "It's not often that players from Canada West or USports get invited to these events so I'm really excited to be able to help showcase the talent we have right here in Canada."

Chamberlin is one of three goaltenders invited who plays in USports and is the only member from the Canada West. She feels like the league should get more national attention due to the fact that it does produce a lot of great players. However, not a single member of Canada's current edition of the National Women's Team has come through the USports route.

"USports is seriously underrated on both the men’s and woman’s side. I think that some players feel like their opportunity to go pro or play with the national team has passed if they don’t play NCAA. I know growing up there was a lot of pressure on me to commit to NCAA early on in my high school career. Now, I’m very glad I didn’t end up going that route. I’ve already had an incredible experience playing for the Pandas and, as cheesy as it sounds, I think it has helped me get to where I am today," Chamberlin said.

"I’ve had a lot of friends go to play NCAA who end up coming back to play in Canada. There's a big emphasis on family and community in Canada that I feel lacks on some teams in the states. Not to mention the hockey is very comparable to some of the big names in NCAA."

Chamberlin said she couldn't have made her mark on Hockey Canada without her time at the University of Alberta and the Pandas' hockey program.

"I think what has helped me the most is how well I fit in with the team and its values. Right from day one (head coach) Howie (Draper) has instilled a “team first” mentality, which has really resonated with me. One of the reasons I play is because I think hockey is the best team atmosphere in sports, and I love being part of a group that’s dedicated and willing to do whatever it takes to reach a common goal," Chamberlin said.

"I also think that the Pandas' history really motivates me. There has been so many incredible players and teams throughout the years, so the standard is set quite high. Our goal every year is to win a Canada West and National championship. Every day you have to come to the rink with that mentality, and be constantly pushing yourself and your teammates to be better. It’s that kind of atmosphere that I believe has allowed me to develop and put me on Hockey Canada’s radar, since this is my first camp with the program."

With this being her first time taking part in a national team event, the 21-year-old goaltender said she has some goals she'd like to achieve in order to put her best foot forward.

"There are some things I'd like to accomplish," she said. "Ultimately, I’d like work my way to main camp in August. There, I think we would be competing against team Usport, France and Japan, as well as go down to Lake Placid to compete against the U.S. development team in a best of three series."