"The game is in honour of Owen and having Betty and Randy there is still key to sharing the message. As I said, they are important members of the Chaos family and it is great to have them at this game and at any of our games when they are able to attend."
0
Jan 24, 2020 3:15 PM By: Troy Durrell 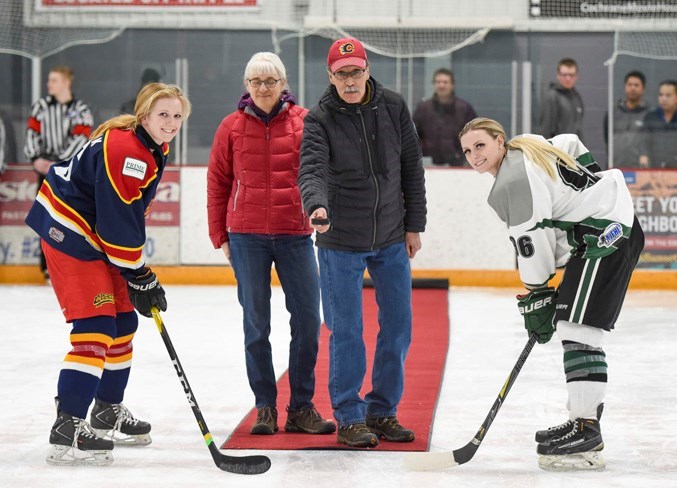 Randy Moore, Owen's father, conducts the ceremonial puck drop before the start of the Owen Moore Memorial Game at Spray Lake Sawmills Family Sports Centre in Cochrane during a game last season. Owen Moore took his life in May 2017 and the game is used to raise awareness about mental health. This year was the third annual game with money being raised for the Centre for Suicide Prevention. File Photo

The Cochrane Chaos won on the scoreboard with a 4-1 victory over the Central Alberta Amazons on Jan. 18.

They're also looking to win the fight against mental health with the third annual Owen Moore Memorial Game.

Moore, who was the brother of two former Chaos players – Kelly and Sarah – took his own life in 2017 drawing attention to the need to bring more awareness to mental health issues, especially among youth. The team raised more than $1,000 through raffle ticket sales that included cash prizes as well as a WestJet draw. The money raised will be donated to the Centre for Suicide Prevention. In total, the team has raised $4,500 that has been distributed to different mental health centres.

"This is the third annual game and the importance of the message is as strong now as it was when we started, Betty and Randy (Moore) are an important part of our Chaos family and we are privileged to help them share their message," Loomer said.

"The game is in honour of Owen and having Betty and Randy there is still key to sharing the message. As I said, they are important members of the Chaos family and it is great to have them at this game and at any of our games when they are able to attend."

The Chaos also hosted a post-game banquet in order to continue the discussion, where they invited players, staff members and family of the Amazons' organization.

"Many of the players on the teams in this league know each other and it is nice to share this event with the Amazons off the ice as well," Loomer said of the post game festivities.

"In addition, Kelly Leonard and Rebecca Toney both played for us in prior years and are on the Amazons team this season and are very aware of the Owen Moore Memorial game history. The dinner went well and we were able to make the draw for our WestJet raffle with both teams in attendance."

The Chaos and Amazons were deadlocked at one heading into the third period where the Chaos scored three goals in the final frame off the sticks of Nicole Johnson, who had two goals along with Kaley Mueller and Summer Gibbons also finding the back of the net.

"It was a great game for both teams," Loomer said. "I thought we started a little slow and got better each period with the third period being our best scoring three times to complete the 4-1 final."

The Chaos have now played three games since coming back from Christmas break, winning two out of three. Loomer feels like his team is getting back into the groove after a few weeks off.

"The third period of the last game was one of our best this season," he said.

"The players are getting back to form and we just have to focus on bringing a consistent effort with a willingness to compete every shift. If we can do that we have a good chance of going to the league final again this season."

Cochrane is tied for first place in the South Division with the Calgary Titans. They'll look to boost their record with a two-game road trip to play the Calgary Jags and Lethbridge Eagles on Jan. 25 and 26.