"As a hockey player or I guess athlete of 18-to-20 years I can really relate to every hockey player and athlete nationally whose leagues came to an unfortunate end due to COVID-19," she said. "It's really unfortunate for all of the seniors who didn't get a chance to finish out there seasons properly. Unfortunately I am considered an overage or a senior in our league."
Mar 27, 2020 6:00 AM By: Troy Durrell 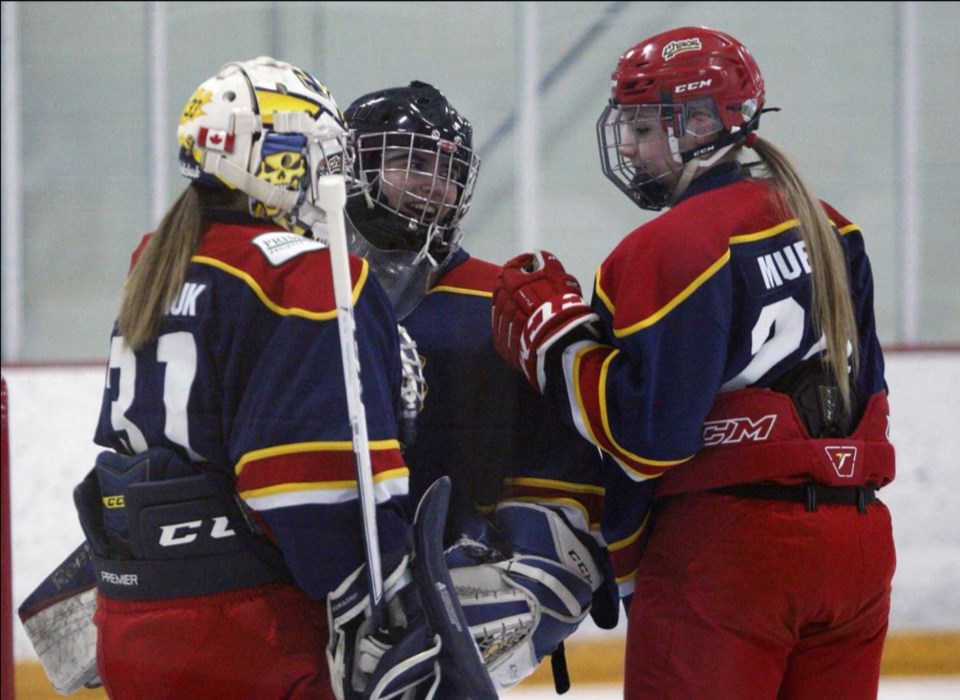 Kate Kowalchuk (left) was forced to graduate early due to the COVID-19 outbreak. Submitted Photo

The Cochrane Chaos were well on its way to a potential banner season, with only the Calgary Titans standing in the way of another berth in the Alberta Junior Female Hockey League (AJFHL) league final. That was until the COVID-19 pandemic hit and caused Hockey Canada to put a stop to all of their sanctioned events for the remainder of the season.

Everybody on the Chaos is eligible to return to the team next season with hopes of taking care of some unfinished business, with the exception of goaltender Kate Kowalchuk, who will be forced to move on from junior due to being too old. She said the way her junior career ended is very unfortunate, but understands why it needed to happen.

"As a hockey player or I guess athlete of 18-to-20 years I can really relate to every hockey player and athlete nationally whose leagues came to an unfortunate end due to COVID-19," she said. "It's really unfortunate for all of the seniors who didn't get a chance to finish out there seasons properly. Unfortunately I am considered an overage or a senior in our league."

Kowalchuk said she almost didn't play hockey this year after breaking her collarbone in the summer, but a meeting with head coach Derek Loomer changed her mind.

"I honestly didn't have a plan to play this year since I broke my collarbone last July until Derek texted me and asked if we could go for coffee when I return from the summer. when I went for coffee with him it was very upfront and honest conversation which you don't get with a lot of coaches. Derek is just a genuinely nice guy and that definitely shows in his coaching style as well as he doesn't just care about developing you as a player he truly down-to-earth cares about you as a person and I think that's what makes him a truly incredible coach," she said.

"The last couple years were some of the hardest years of my life and Derek was always there for me and would do anything he could to make me comfortable and to help me in every aspect of life whether that was hockey, a job he always had my back."

She also said her teammates were some of the best she's had during her time playing hockey.

"I came into the team this year knowing a couple girls but i was still trying to figure out who I was as a person and a leader. But this group of girls is truly something special and I'm going to carry everything I learnt with this group with me for the rest of my life. They welcomed me with open arms and helped shape me into who I am today and for that I'm forever grateful," she said.

Some of my best friends in my life right now came from this team and I guarantee you will stay with me for life. There truly isn't any team I've been a part of that even compares to this group of girls. On and off the ice they took it seriously but it was always fun and it was always a day that I looked forward to when I got to step on the ice with them. This group I think we truly pushed each other to be the best hockey players we've ever been and the best people we've ever been. I'm eternally grateful for the entire team and coaching staff as well. They always knew how to pick you up when you're down and put a smile on your face even if life isn't going your way."

Kowalchuk said she thought the Chaos had a great chance to win the league championship, something they have yet to do in their team's history. She was solid in the Chaos net, suiting up in nine games, going 7-1-1 with a 1.54 goals-against-average and a .939 save percentage.

"I do truly believe that the team we had in place this year was definitely going to go all the way to win the league. So it's really unfortunate that we never got that chance to prove ourselves. But honestly we came so far this year and to be in the South final playing against a team that we haven't beaten all year was really putting us to the test as a group both on and off the ice," Kowalchuk said.

"But getting that first win against them all year and in the series just took our team to a whole different level both on and off the ice and I think we were closer than we have ever been. I still don't think we were at our best I think we still had another another level to prove. I really wish that we had that opportunity to do that but honestly we went out on as high of note that we possibly could. I honestly couldn't have asked for a better ending under the circumstances that we had."

Kowalchuk said it hasn't truly hit her yet that her junior hockey career is now officially over.

"I don't think it's really hit me yet that our year is over," she said. "But I do have an offer to go play down in Pittsburgh next year. Still pending a few things but I have that opportunity if that's something I want to pursue. Which I'm still super competitive so I'd love to play at that level as long as I can."