The Cochrane Cobras football team is looking for their sixth straight title at the provincial level.
0
Aug 22, 2019 11:52 AM By: Troy Durrell 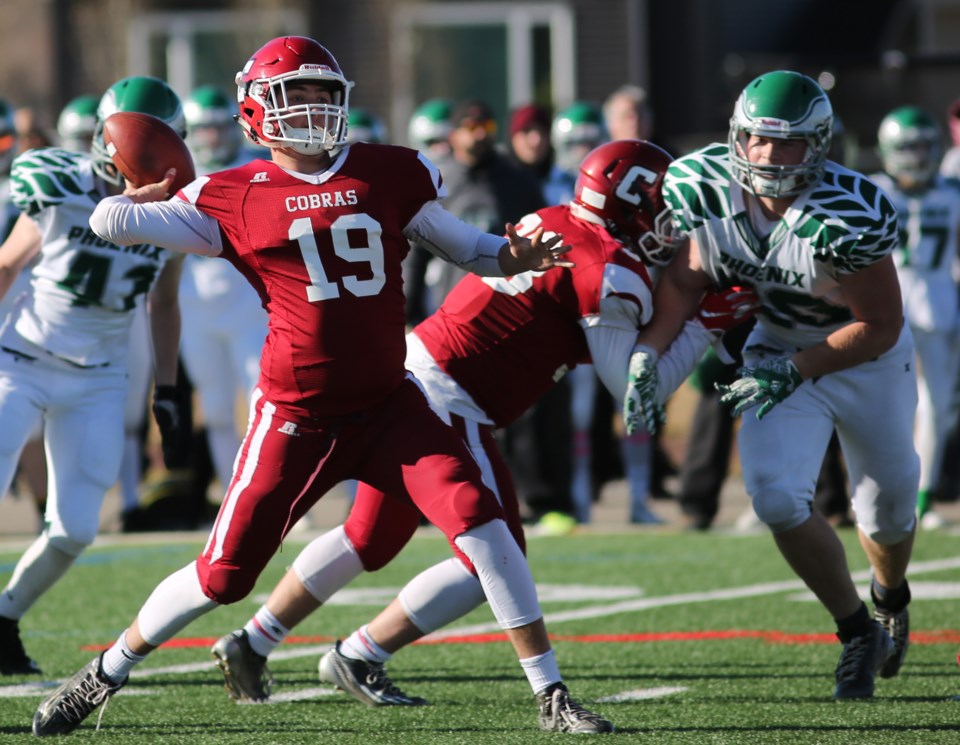 Cobras quarterback Xavier Valliancourt will be a huge part of his team's success this season. File photo

Summer is practically gone and football season is right around the corner. The Cochrane Cobras are looking for their sixth, yes sixth, straight Tier 3 provincial championship when their season kicks off on Aug. 30 against the Chestermere Cowboys.

Last season, the Cobras went undefeated throughout the season, going 6-0 in league play, and 3-0 in the provincial tournament to capture their fifth straight Alberta Schools’ Athletic Association (ASAA) provincial championship after defeating the Holy Rosary Raiders 25-8 in the final game. The Cobras scored an astounding 391 points over the course of those nine games, averaging just over 40 points per game while only allowing 79 points over the course of the season, an average of just over eight points per game.

The Cobras held their spring camp back in early June and will begin season preparations for the Cowboys when they hit the field for their first practice on Aug. 26. It's a short week before the first regular season game but co-head coach Rob McNab said that the team will be prepared due to their work leading up into the fall camp.

"We had a pretty good spring camp, got organized and the team was picked," McNab said. "So we're just going to jump right into game prep ... we're hoping the kids come back in shape and ready to go for the upcoming season. We're just focused on the upcoming game with Chestermere."

As every team does, the Cobras lost numerous key players to graduation such as all-star receivers Dylan Neis and Dawson Laye as well as safety Joseph Bell on the defensive side. Those three, along with three other members of the Cobras, shared the Most Valuable Player (MVP) award at the team banquet back in December, showing just how important they really were. McNab said he expects other players to step up into the roles left by those former members if the team is going to find the same success this season.

"We lost (receivers) Dawson Laye and Dylan Neis and some guys on defence that will be big losses, just in terms of what they brought to the team. The good news is, is those guys behind them have been prepped since the 10th grade," McNab said. "Players in that position before have been able to step in and we've just kept on rolling. We've done that for years ... guys like Dawson Gladue, who was on the Team Alberta under 18 team, we'll be counting on him as well as (quarterback) Xavier Vaillancourt, he's the key to everything. But guys like Ethan Noble, Fox Bell, Derek Reed and Jake Thompson, they're all ready to go and chomping at the bit to be the guy."

As McNab mentioned, having playmakers on both sides of the ball is important but Vaillancourt will be the guy that stirs the Cobras drink on offence, should he continue his impressive play from last season.

"He's definitely got to progress. He's got to get the ball out quicker, get his foot work going and make his reads quicker ... everything that you have to progress and go through until you get to the next level," said McNab. "Every team in Canada is chomping at the bit to sign him, our job is just to give him stuff that he can handle and help him focus on getting faster. Faster at making reads, throws, footwork and everything there."

With the pressures of teams trying to sign players from Cochrane High early in the year, McNab wants the team to focus on the week ahead of them before worrying about what will happen at the end of the season in regards to future educational plans and winning provincials.

"It's all about goal setting. The end goal is always to win the provincial championship but in between, we're all about intermittent goals, week-to-week," McNab said. "Obviously, our first week we've got to prepare for Chestermere ... that's our goal, we don't talk about anything else other than Chestermere. I think the shorter-term goals kind of take away from that 'Woah what's going to happen to me at the end of the year' type of deal. Plus the kids know they've got to perform and stay healthy or else that could be jeopardized."

"The same thing goes for provincials. It's a step by step process to get there as well as win. We have many goals to hit before we can say we're in the provincial game but that is our long term goal, there's no question ... we want to be in the last possible game during the high school football season and we want to win it. That's the goal."