Cobras Joseph Bell signs on to play with Dinos football

Cochrane Cobras safety Joseph Bell is continuing his football career at the University of Calgary with the Dinos program after he signed his letter of intent with the team on May 1. "It feels awesome," Bell said of signing with the Dinos.
May 15, 2019 10:58 PM By: Troy Durrell 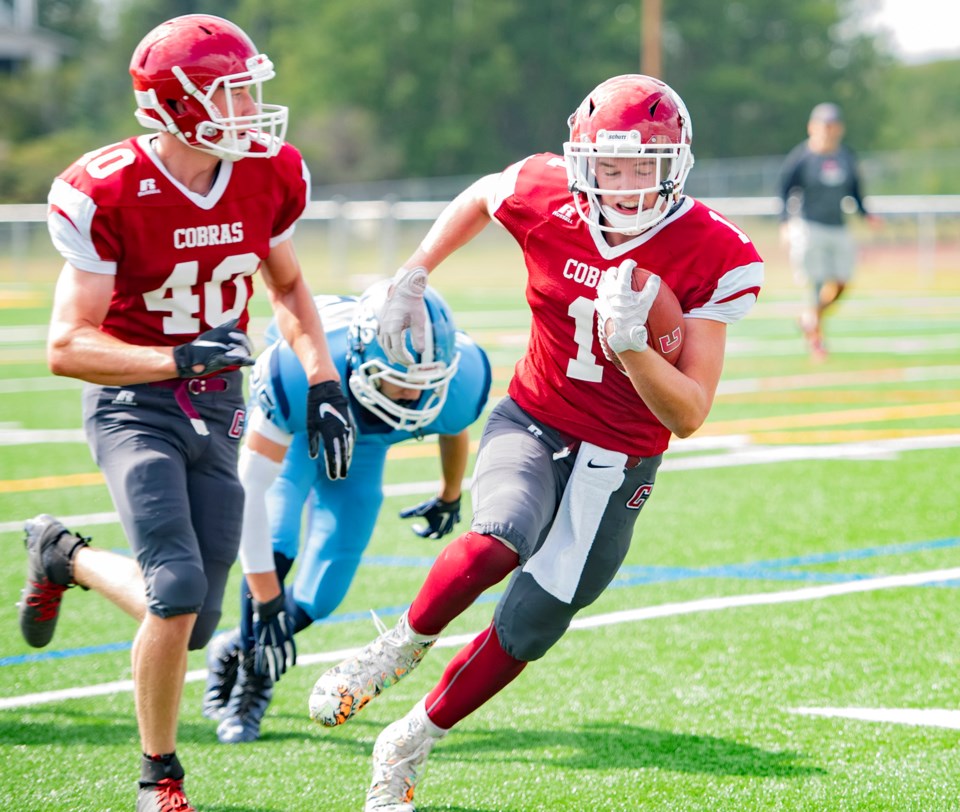 Cochrane Cobras safety Joseph Bell is continuing his football career at the University of Calgary with the Dinos program after he signed his letter of intent with the team on May 1.

"It feels awesome," Bell said of signing with the Dinos. "It's been a dream of mine to sign with my home team."

"Two other teams out east in Ontario reached out to me in Guelph and Windsor, both of which offered me a chance to play there, but wanting to play for my hometown school was the reason I committed to the University of Calgary."

The Cobras went undefeated throughout the season, going 6-0 in league play, and 3-0 in the provincial tournament to capture their fifth straight Alberta Schools’ Athletic Association (ASAA) provincial championship after defeating the Holy Rosary Raiders 25-8 in the final game.

Bell was one of the six recipients of the team's Most Valuable Player (MVP) award while also sharing the Leadership Award with Logan Higginson and took home the league award for Best Defensive Player due to his knack for big hits over the middle at the safety position while also chipping in with three interceptions and several tackles on both defence and special teams on the season.

Bell said a large part of his success came due to the fact he got to suit up for three years at Cochrane High with the Cobras football program under the guidance of defensive backs coach Tom Knitter.

"Cochrane High is a program that cannot be praised enough," Bell said. "Elite talent has gone through the school many times and the coaches are more than outstanding. For me personally, this year I had a coach in Tom Knitter that improved the little details in my game and that is what made me talented enough to play at the next level. Playing at Cochrane made me the player I am today and coach (Rob) McNab and (Bruce) O'Neil created an environment where it's not only about skill but the commitment to the next level."

Bell highlighted Knitter as one of the reasons he was able to get his game up to the standard of the USports level.

"The film was huge and he was so helpful on how to create space from the receiver or how to read the ball on the run and get a step in order to jump the ball," said the 6'0, 195 pound safety of his coach.

"Coach Knitter also helped me learn how to break on receivers hips and keep tempo in my back pedal ... all things that were preached at the Dinos spring camp. Coach (Knitter) also knew the commitment and the work put into practice for the next level and how he performs a university style practice (as a coach) for the defensive backs."

Bell said he models his game after a current National Football League (NFL) safety and he one day hopes to maybe get into coaching once his playing career is done.

"I was actually told to play football by Darian Stewart who plays in the NFL. I lived next door to him and he's a very physical but very smart safety. That's who I model my game after," said Bell.

"University football is probably my peak but if an opportunity ever came up to coach like Tom Knitter, I would love to do that as well."

The soon-to-be former Cobras safety isn't the only member from Cochrane High on the Dinos roster as Erik Nusl is heading into his third year after missing all of last season with a knee injury while Dylan Neis signed on to join the team in December.

"Having other Cobras on the team is nice and especially having Dylan makes it easier. He has played with me every year and continuing our football careers together and have the opportunity to rep the Dinos is awesome."