The current schedule will take the team into February, and the Heritage Junior Hockey League will determine a plan for the playoffs at a later date.
Oct 25, 2020 12:00 PM By: Tyler Klinkhammer 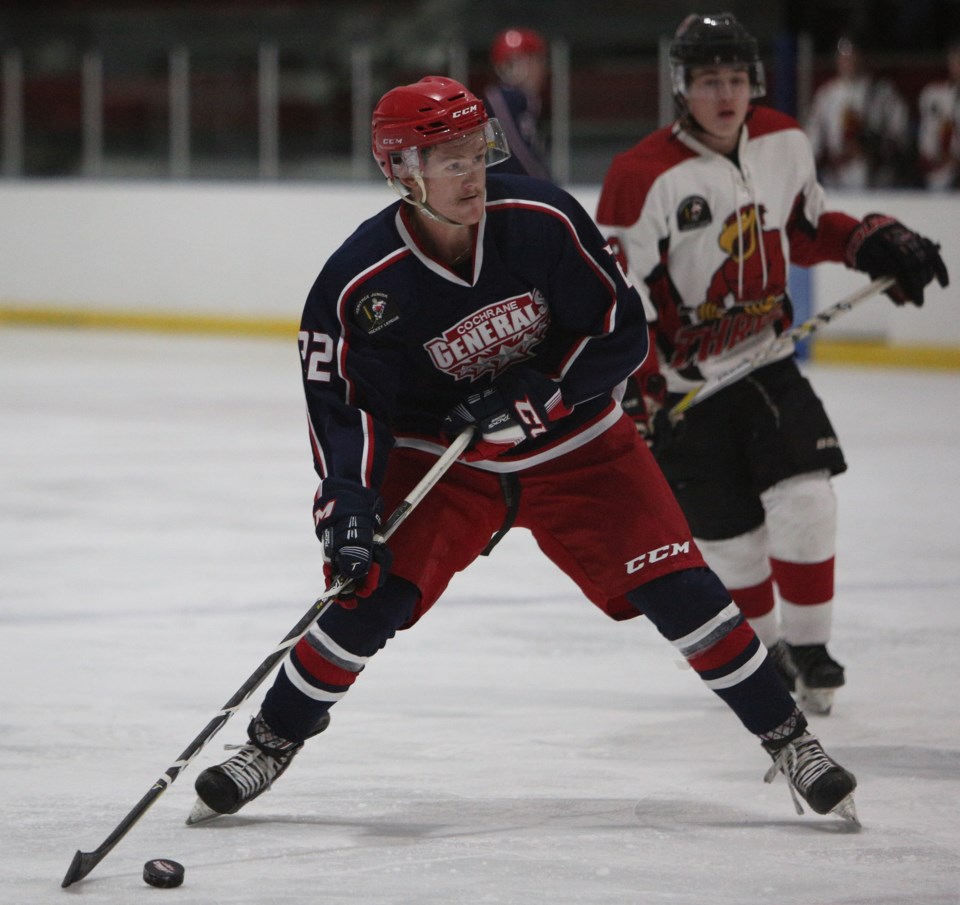 The Cochrane Generals have plotted a course for this season, and will host the opening home game on Nov. 1. File Photo.

COCHRANE— The Cochrane Generals have determined their schedule for the upcoming season and are ready to take to the ice.

The Gens are kicking off their season against the Lomond Lakers on Oct. 30 in Vulcan, before returning for the home-ice season opener on Nov. 1 at the Cochrane Arena at 2:45 p.m.

Currently, due to provincial health and safety guidelines, only 100 spectators are allowed in the facility at once.

“I think [head coach Kurtis Jones] and the board and everybody else is excited, but there’s still a lot of work to do,” said assistant general manager of the Cochrane Generals, Paddy Maclure. “For now we just have to figure things out about the attendance, and all the other intricates about having the players ready, and making sure that we’re ready to go for that first game against Lomond.”

Cochrane, Lomond, Medicine Hat, Coaldale, Strathmore and Okotoks will be in one division. Each team will play a series of games against each other, then take a two-week quarantine break before moving on to the next team.

Maclure said that those series will take the team into February, and the Heritage Junior Hockey League has yet to determine a course of action following that point.

The Gens are also hosting a sneak peek to promote the upcoming season with a red versus blue interclub game on Sunday (Oct. 25) at 2:45 p.m. at the Cochrane Arena.

The event is free to attend but similar to the actual games, spectator attendance is limited to 100 people.

“It’s just a chance to hopefully get the players ready for the opening game because the players don’t really have an exhibition game at all,” he said. “They’re itching to go, practices have been good and I think [Kurtis] is fairly happy with the team, so we’ll see how it goes come our first league game.”

Tickets for the upcoming season are not for sale yet, but Maclure said the board will be determining a plan to release tickets by the end of the week.

The club, he noted, is still on the lookout for sponsors for the upcoming season.