“For the sake of the children, I hope that the season happens. Mentally and physically, they’re ready for more, they’re tired of sitting inside their homes and not being able to connect with their friends.”
Feb 11, 2021 4:00 PM By: Tyler Klinkhammer 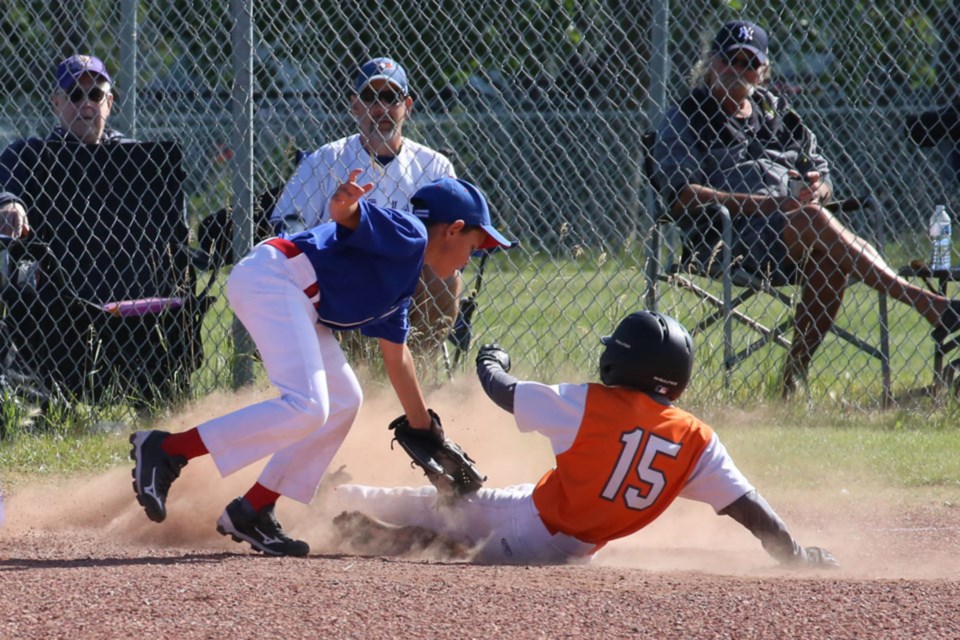 Ty Krooshoop of the Cochrane Crush connected on a hit and rounded the bases, sliding safely into third base. File Photo

COCHRANE— User groups and minor sports organizations throughout Cochrane are gearing up to resume their programming or plan for upcoming seasons after the easement of provincial health restrictions went into effect on Monday (Feb. 8).

Cochrane Minor Soccer is in the process of finalizing its plans for the upcoming soccer season, said tiered league play coordinator Rhonda Carr.

For the Grassroots and Development leagues, programs for kids aged three to 12 in development and non-league teams, the season will begin on April 26 and run for four weeks to June 19.

Tiered league teams for age groups U9 to U19 will also commence mid-April, with start dates varying for each age group.

Registration for all teams for the upcoming summer season of soccer will kick off at the end of the week, Carr said.

She noted their club will be allowed to host cohorts of ten, two coaches and eight athletes, on one half of the turf on the indoor field at Spray Lake Sawmills Family Sports Centre.

Carr said before the registration for the summer season begins, Cochrane Minor Soccer is focused on getting the kids who are registered for the indoor season back to their programs.

“Anything that opens up right now will be just for those that are already registered,” she said. “It’s just out league teams that we’ll have training for once we get back on the turf, which we hope will be by next Monday."

She added the U8 and under teams will not have any programming resumed at this time.

Carr said she and the other programming coordinators at Cochrane Minor Soccer are planning to join in on league participation this summer.

“They participate in the Calgary Minor Soccer league and we’re going to go ahead as if that will go as normal and adjust as need be,” she said.

Evaluations for those teams typically go ahead indoors at the Spray Lake Sawmills Family Sports Centre turf arena in mid-March, but those plans are still being finalized for the upcoming season.

For the summer season, Carr said, Cochrane Minor Soccer will be taking a small placeholder fee in place of the full registration amount, explaining that the cancellations of last season were difficult to deal with administratively.

Once the season is ready to begin, the full amount will be due.

“I think it would be easier that way rather than asking people to put the full amount of money out right now,” she said. “We learned last year, we had full fees collected because our registration was done and then we had to refund everything …  We don’t want to have to go through that again.”

Carr said the support they have received from the community has been heartwarming for her.

As an administrator, she said, she often only hears from people when there is a problem that needs to be addressed. In recent months, the communication from the community has been all positive.

“The understanding within the community right now and the patience is amazing. The only messages we’ve gotten are positive with ‘thank you guys for doing everything you can to get our kids back or engage them,’” she said. “It’s great positive community feedback.”

While Cochrane Minor Soccer plans to reopen a development-only indoor season, Cochrane Minor Ball is trying to figure out how they will go ahead with evaluations for its upcoming season.

“We had a bunch of turf lined up to do tryouts for our Baseball Alberta programs, for our 13U and 15U teams. Due to the newest easement of restrictions released on Saturday, we’re just kind of doing a little back-stepping because we already moved some stuff around,” said Michelle O’How, administration and operations manager at Cochrane Minor Baseball. “We’re just trying to figure out what’s going to work best for those tryouts, and right now it just looks like we’re going to push them into March.”

She said before they released their plans for evaluations, she needed to find out about turf availability at Spray Lake Sawmills Family Sports Centre.

“I think everyone is just waiting on the edge of their seat to determine what they’re plan is going to look like and what’s going to be available.”

O’How said they have had a little more than 350 kids register for the upcoming season, an increase of roughly 250 more kids than last season.

She said that she hopes to see COVID-19 cases continue to decline, and that the warmer summer months bring a better situation than the winter has with regards to the virus.

For now, O’How said she is just staying busy, planning for a successful season of baseball and giving all of the youth who want to play a chance to do so.

“I just want to keep everybody in town playing that wants to play. I think that’s the biggest thing, just offer an opportunity if its available. If we have to do cohorts then we do it, if we can have a regular season that would be fantastic.”

O’How has heard from many families inquiring about the upcoming season.

Cochrane Minor Ball is ready to adjust to fit public health measures, she said, for the sake of her children and the rest of the youth in the community, to ensure the season goes ahead as planned.

“Our kids are struggling. They basically missed their whole hockey season— A time where they get out to spend time with their friends and family, doing all the things that they love to do and they missed out on that opportunity,” she said. “For the sake of the children, I hope that the season happens. Mentally and physically, they’re ready for more, they’re tired of sitting inside their homes and not being able to connect with their friends.”

To find out more about either program, visit CochraneMinorBall.ca for baseball registration, or 932kick.ca to find Cochrane Minor Soccer.