The Cochrane Generals are back in the win column after a pair of close victories over the Stettler Lightning in Heritage Junior Hockey League (HJHL) action on Dec. 13 and 15.
0
Dec 19, 2019 3:40 PM By: Troy Durrell 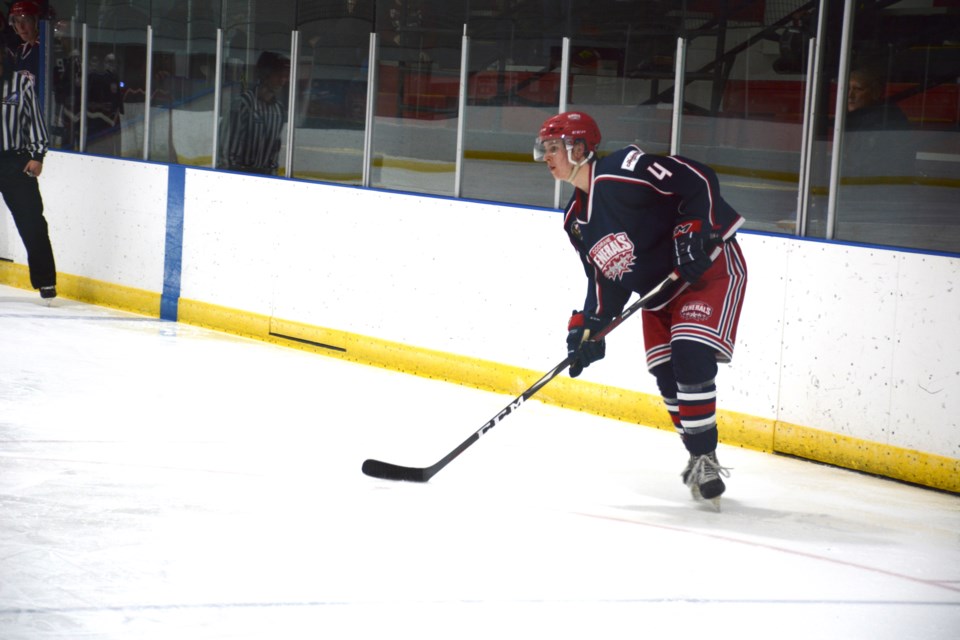 The Cochrane Generals won a pair of games against the Stettler Lightning on Dec. 13 and 15. Photo by Troy Durrell

The Cochrane Generals are back in the win column after a pair of close victories over the Stettler Lightning in Heritage Junior Hockey League (HJHL) action on Dec. 13 and 15.

The team rebounded from a tough couple of games that resulted in losses to the Sylvan Lake Wranglers on Dec. 1 and Ponoka Stampeders on Dec. 8 in which they were outscored 5-0 over the course of the five periods, with the final period in Ponoka getting cancelled due to issues with the ice to boost their record to 17-7-1 after their games against Stettler.

The first game of the home-and-home took place at the Stettler Recreation Centre where both teams scored within five minutes of the game. Patrick Forde got a goal but it was quickly answered by the Lightning who tallied a goal of their own just 16 seconds later to knot the score up at once. Generals newcomer Justin Giacomin potted his first HJHL goal, which was followed up by a goal from Dean Olenyk with just 51 seconds remaining in the period to put the Generals ahead 3-1. In the second period, it looked like Cochrane was going to run away and hide when Sam Norris scored to make it 4-1 but Stettler responded with four straight goals over the next six minutes to go up 5-4 heading into the third period. Cochrane responded the way any coach would want, with Jordan Marks tying the game on the power play just two minutes into the period before Caden Chudleigh scored the game winner mid way through the third to give the Generals a wild 6-5 victory.

Erik Garber was his usual solid self, stopping 30 of the 35 shots he faced while Patrick Forde was an offensive force for the visitors, scoring a goal and adding three assists for four points.

Cochrane dominated for most of the game in terms of puck possession and shots but the game was close in score due to a 54 save performance by the Stettler goaltender. Chris Sambrook scored the game's opening goal and it stood until the third period where Stettler once again showed their quick strike ability, scoring back-to-back goals forcing Zach Cugnet to tie the game at two with 30 seconds remaining and sending the game to overtime where captain Brandon Aab blew a power play goal past the Lightning goaltender to win it for the Gens.

Generals forward Shane Benoit said the pair of wins was good for the Generals confidence, as they had had some trouble putting the puck in the back of the net the previous two games.

"It was huge for us to win those games we hadn’t scored a lot in our previous couple games and just getting some pucks in the net was the biggest thing for us once one went in the floodgates opened," Benoit said.

"We keep a positive attitude on the bench and in the dressing room and our team culture has shaped into everyone stepping up and fighting to get back that lead it’s been like that all year and I think it showed this weekend."

The Generals haven't faced too much adversity over the first half of the season, and when they have with a couple of back-to-back losses here and there, they've been able to respond the way that they want.

"It’s huge, teams that win championships tend to go on runs and cut their losing streaks short," he said.

"Our goal after a loss is always to go out hard and get the win cause when it comes down to playoff time you can’t be losing back-to-back games."

The Gens will play another pair of games on Dec. 20 against the Okotoks Bisons at home before closing out the first half of the season with a road game against the Medicine Hat Cubs. Benoit said a break will be good for the team to rest up and refocus.

"I think a break is good for some guys to let us refocus," he said. "Sometimes during the season you don’t get time to step back and critique the season so far. The practices over the break will be high intensity because we don’t have games to worry about so I don’t think we will lose our focus."