"Yeah, although we're down 2-1 in the series, I felt like we played some pretty good hockey as a team," he said. "They've all been very close games. They got a bounce in Game 1, we got one in Game 2 and then they got another bounce in Game 3. It was a lot of hockey in a short period of time so I'm definitely not upset with our play this weekend."
0
Mar 12, 2020 2:00 PM By: Troy Durrell 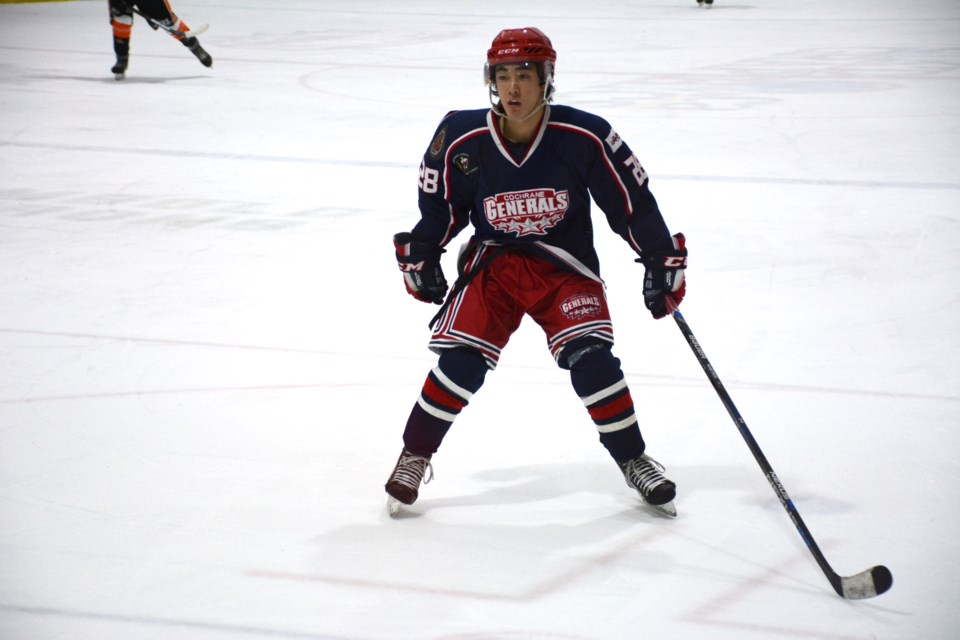 The Cochrane Generals are looking to tie up their third round series with the Okotoks Bisons at two. Photo by Troy Durrell

After three games in their third-round series, the Cochrane Generals are hanging in with the best team in the Heritage Junior Hockey League (HJHL).

The Generals, who finished the season with a 27-9-2 record and are coming off a Game 7 win over the Medicine Hat Cubs after the Cubs were up 3-1 in the series. They are currently taking on the first-place Okotoks Bisons in their semi-final matchup, a team that finished their regular season with a 35-2-1 record, good for 71 points with a goal differential of plus 148, outscoring their opponents 232-84 on the season. They also blew through their second-round matchup with the High River Flyers, disposing of them in four games, outscoring them 17-2.

Game 1 of the series took place on March 6 in Okotoks. The Bisons won the game by a score of 4-2 with Cochrane getting goals from Takuro Okada and Jordan Fisher. Game 2 the following evening in Cochrane was a different story, with Cochrane squeaking out a 3-2 victory after Patrick Forde netted the game-winning goal with only 1:40 left on the clock. Caden Chudleigh and Zachary Stewart also had goals in the victory. To finish off the final contest in a three games in three nights set to start the series, Okotoks took a 1-0 decision to take a 2-1 series lead.

Generals goaltender Erik Garber who has stopped 82 of 89 total shots he's faced over the series, said Cochrane has played some good hockey despite being down 2-1 in the series.

"Yeah, although we're down 2-1 in the series, I felt like we played some pretty good hockey as a team," he said. "They've all been very close games. They got a bounce in Game 1, we got one in Game 2 and then they got another bounce in Game 3. It was a lot of hockey in a short period of time so I'm definitely not upset with our play this weekend."

Garber also added that the games being so close has given them a lot of confidence that they can beat a team who has now only lost three times in 45 games played over the regular season and playoffs.

"It certainly does (give us a lot of confidence). It shows that they are a beatable team," Garber said. They are a really good hockey team but I always thought they were beatable so having that win proves that we can do it and it gives us the confidence we need going forward."

"We just have to keep playing our game. We have to come out and play a full 60 minutes in order to be successful. Okotoks will take advantage of anything we give them so we can't take one shift off the whole game. I think we know what we have to do to win. We have a game plan and we plan on sticking to it and if we execute that then I believe we can exploit their weaknesses and make them to our advantage."

Going back to Game 5 against Medicine Hat, the Generals have played six games in 10 days which means a three-day break in between Games 3 and 4, couldn't have come at a better time.

"It's definitely nice to rest up and get ready for Thursday night," Garber said. "That being said, we are still having practice time to stay sharp. Too much time off I think would hurt us but having a break is nice for sure."

Game 4 will take place at 8 p.m. on March 12, with Game 5 taking place the following day in Okotoks. If needed, Game 6 and 7 will be played on March 15 in Cochrane and March 17 in Okotoks.