Now that the National Hockey League has locked out its players, where are you going to get hockey? How about just down the street? The Cochrane Generals open their 2012-13 Heritage Junior Hockey League season Sept.
0
Sep 19, 2012 12:00 AM By: Cochrane Eagle Staff 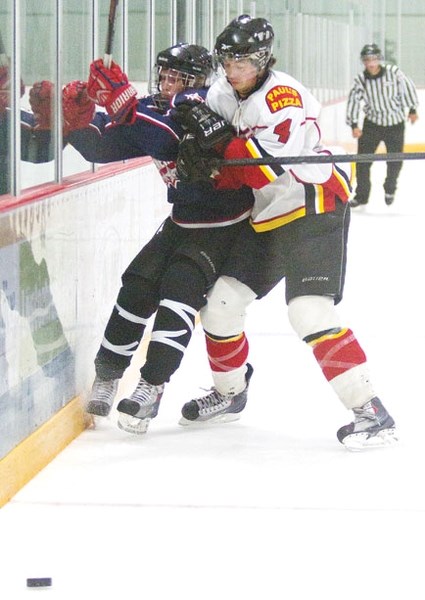 Now that the National Hockey League has locked out its players, where are you going to get hockey?

How about just down the street?

The Cochrane Generals open their 2012-13 Heritage Junior Hockey League season Sept. 21 at Spray Lake Sawmills Family Sports Centre (SLSFSC), and the players are just itching to put on a show for home-town hockey fans looking for some game.

“The more the merrier,” said Generals leading scorer Jason Labelle, who bagged a pair of goals in Cochrane’s 5-4 Sept. 16 exhibition win over the Airdrie Thunder at SLSFSC. “It’s always better to have the support of your community.”

And the fans at the Generals’ final exhibition game were definitely supportive of the team’s come-from-behind win over Airdrie. Down 3-0 in the second period, Chris Hugo netted a power-play marker just 93 seconds in. Behind 3-1 to start the third, Labelle gave the crowd something to cheer about with a minute gone, banging in a rebound to make it 3-2.

But it was Labelle’s second goal that really got the fans worked up as he charged through centre ice with the puck, stick-handled his way around a forest of players and sticks before bulling his way to the net and jamming the puck in to tie the score 3-3.

“It’s good to get people out to the games,” Labelle offered. “It’s always a little easier to get going with a big crowd on your side because the place will get loud at every hit your team has.

“It’s just good to have that presence.”

In return for your $5 ticket you get game, the game that’s not being delivered by the National Hockey League, which has locked out its players. Again.

“This is good hockey,” Generals head coach Ken Soloski stated. “There are a few people who’ve said, ‘You know what, I’m not going to watch NHL any more.’

“They’re going to come out and watch us. And that’s good. We’ve got a good product and we’ve shown it.”

The Generals open their regular season against Medicine Hat, 7 p.m. this Friday (Sept. 21) at SLSFSC.