Generals shoot their own feet

The Cochrane Generals ended summer the same way the finished their season last spring. With a loss. But summer’s over and the first game of the 2012-13 Heritage Junior Hockey League season has gone with it.
0
Sep 26, 2012 12:00 AM By: Cochrane Eagle Staff 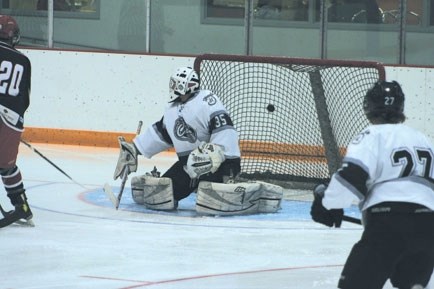 enerals forward Taylor House scores Cochrane&#8217;s first goal of the 2012-13 Heritage Junior Hockey League season against Brandon Chornoby, just 35 seconds into their Sept. 21 tilt against the Medicine Hat Cubs. But penalties, and a very game Cubs side, would send the Generals away with a 7-3 loss.

But summer’s over and the first game of the 2012-13 Heritage Junior Hockey League season has gone with it. And the Generals still have a whole season in front of them to reconcile their 7-3 season-opening loss to the Medicine Hat Cubs Sept. 21 at Spray Lake Sawmills Family Sports Centre.

“I saw lot of positive things, a lot of good things,” said Generals head coach Ken Soloski following his first regular-season game as the team’s head coach. He was assistant coach last season. “But, ultimately, it was our discipline that did us in.”

The game started well enough for the Generals. The national anthem was still echoing through the rink when Taylor House sniped a goal past Cubs netminder Brandon Chornoby 35 seconds into the first period.

Soon after, the Generals started taking penalties and paying the price. By the end of the first, the Cubs had put three past Generals starting goalie Brady Markham.

“We took penalties. We took bad penalties,” said Soloski. “We reacted to what the other team was doing in a negative way.”

House scored his second of three on the night halfway through the second period, one-timing a pass in front of the net. But the Cubs poured in three more goals in the third period.

Soloski was unconcerned that one player, House, did all his team’s scoring against the Cubs.

“I have six offensive forwards that are interchangeable and you will see on any night that any one of them can score three goals,” he assured.

And his young defence held up their end.

“Ultimately, I don’t think it was our defensive play that hurt us.

“It was our discipline.”