"(Those games) gives us confidence that we are a team to beat in the league. We proved we can play with two of the best and it shows that we are a top team. We want teams to not want to play us."
Nov 14, 2019 2:30 PM By: Troy Durrell 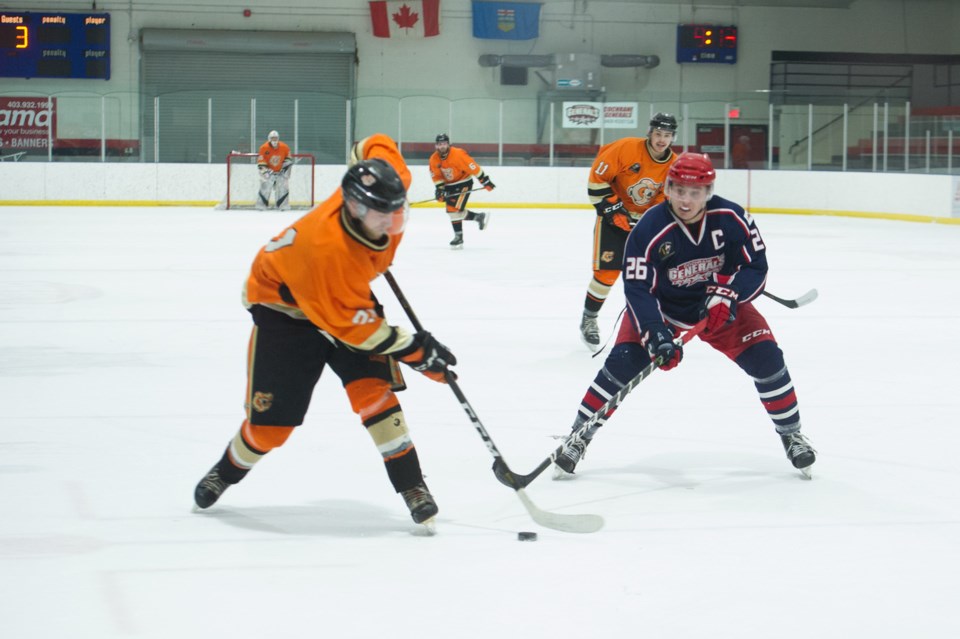 The Cochrane Generals split their weekend series with games against Okotoks and Coaldale. File Photo

If the Cochrane Generals needed any more proof that they were a top team in the Heritage Junior Hockey League (HJHL), they got it when they played two of the top teams in the Southern Division in a pair of road games against the Okotoks Bisons on Nov. 8 and Coaldale Copperheads on Nov. 9.

In the game against the Bisons at Murray Arena, the Generals got out to a quick start on a goal from Patrick Forde just five minutes into the contest while firing 13 shots at the Okotoks netminder. Okotoks tied it up with a powerplay goal just a few moments after to send the teams to the dressing room with a 1-1 tie.

The second period was when things really started to heat up. The teams combined five goals in the period as Brandon Aab and Chris Sambrook scored for the Gens with three different Bisons skaters potting goals giving them a 4-3 lead heading into the final period. Jordan Marks and Sam Norris struck quickly for the visitors within the first five minutes of the period to put the Generals up 5-4. The undefeated Bisons showed the grittiness and determination that helped them reach their unblemished record thus far with a goal at 13:05 to tie it before potting the game-winner with just 1:56 left to go in the game. This gave them a 6-5 victory and push them to 17-0-0 on the season.

While the loss was disappointing, Cochrane didn't have much time to dwell as they headed to Coaldale for a late night game against the Copperheads. The Generals seemed to have their heads in the game as Coaldale scored the first goal of the game and took the lead into the second period. Takuro Okada found the back of the net for the Generals when he scored on the powerplay when he took the feed from Zach Cugnet and deposited the puck in the Copperheads net. Coaldale scored the next two goals in the game, one coming late in the second and the other early in the third to put Cochrane in a hole. Dean Olenyk continued his hot streak with a goal to make it 3-2 before Patrick Forde knotted the game at three. Okada would pull off some more magic, scoring his second goal of the game to make it 4-3 with goaltender Erik Garber thwarting away any remaining Coaldale chances to give the Gens a come-from-behind victory.

"I felt that we had a good weekend," Garber said. "Obviously we didn't get the four points that we were looking for but those are two tough teams right there. Being on the road back-to-back against Okotoks and Coaldale is probably the toughest schedule we could have all regular season. It was tough losing to Okotoks late in the third when we were so close all game, but then to come back in the third being down 3-1 and beating Coaldale was huge for us standings wise as well as team wise."

"(Those games) gives us confidence that we are a team to beat in the league. We proved we can play with two of the best and it shows that we are a top team. We want teams to not want to play us."

Both games this weekend were high scoring affairs, which usually is a goaltender's nightmare. Garber said he just tries to focus on the future and not dwell on allowing a couple of goals here and there over the course of a game. He has seemingly done that well over the course of the season winning seven of the 13 games he's started with a 2.63 goals against average and two shutouts.

"For me I think you really have to not think about the goals once they're scored and just focus on stopping the next one," Garber said. "There's nothing you can do to change the past so you just have to hit the reset button and focus on the next play."

"It can be (a hard thing to do) at times, but when I played at Banff Hockey Academy a few years ago, we played in the HJHL and as a Midget prep playing in the league as a 16 or 17-year-old while playing for a losing team made me learn a lot from that year. It has really helped me out with that aspect of the game now that I'm older."

Garber said it also helps to know that the guys in front of him can put the puck in the back of the net.

"Yeah it definitely does help out (knowing that they can score goals)," he said. "It's good to know in the back of our minds that we all have each other's backs when battling through adversity during games."

The Generals will once again hit the road in the middle of their six-game road trip, as they'll be in Strathmore on Nov. 17 to face the Strathmore Wheatland Kings.