Gens and Chaos experience abrupt end to their seasons

The Cochrane Generals and Cochrane Chaos were both primed for long playoff runs in their respective leagues that had championship potential written all over them.
0
Mar 18, 2020 2:10 PM By: Troy Durrell 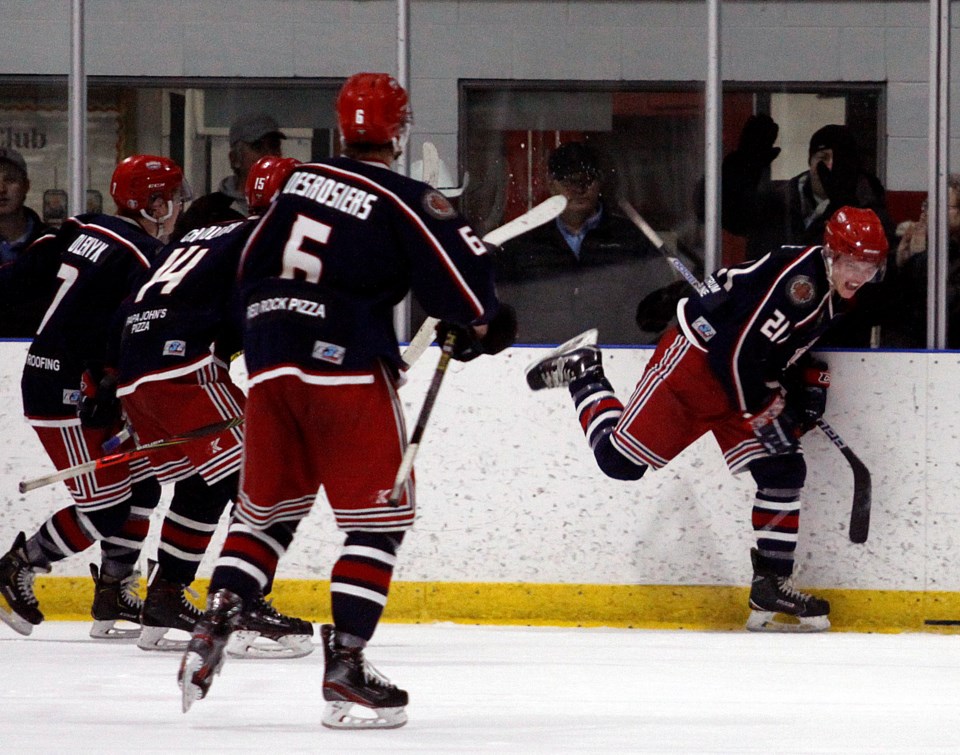 Cochrane Generals Patrick Forde, 21, celebrates his OT goal during Game 4 of their series with Okotoks. The HJHL had to cancel the remainder of its season due to Covid-19. Photo by Patrick Price

The Cochrane Generals and Cochrane Chaos were both primed for long playoff run in their respective leagues that had championship potential written all over them.

That was until both teams experienced an abrupt end to their seasons due to the Covid-19 pandemic that forced Hockey Canada to shut down all on and off ice hockey-related activities.

“Without question, this an unprecedented period of difficulty for the sports world. The health and safety of all participants in sport, including players, coaches, staff, officials, fans, family, volunteers and the general public, is of the utmost importance to Hockey Canada," Hockey Canada chief executive officer Tom Renney and chief operating officer Scott Smith said.

"After much consultation with the Hockey Canada membership, our chief medical officer and public health officials, the Hockey Canada Board of Directors has made the decision to cancel all Hockey Canada-sanctioned activities, including our national championships, until further notice, effective Friday, March 13, 2020."

"We recognize the tremendous effort that has been put forth all year by individuals across the country as they participate in Canada’s game. Although it is difficult to process the hockey season-ending abruptly, we feel this is the best course of action in order to do our part in keeping our country safe.”

The Chaos was leading the Calgary Titans 1-0 in their best-of-three Alberta Junior Female Hockey League (AJFHL) semifinal series before getting word that their season was over. They were looking to make their third straight appearance in the AJFHL final.

"The end of the season in this manner is very disappointing," said Chaos head coach Derek Loomer. "When I reflect on the hours our players dedicated to establishing our structure and skill to give us the best chance to win a title this season after two disappointing endings during the last two seasons it is heartbreaking. For our players that are graduating from junior hockey due to their age, it is a hollow ending. I guess overall it leaves an empty, anticlimactic finish to what was a very rewarding season."

The Chaos finished the year in second place in the south division, with a 17-8-3 record, which was fourth-best among the nine teams. They defeated the Lethbridge Eagles in round one of the playoffs and were poised to knock off the top team in their division in round two.

The Cochrane Generals were also only two wins away from getting to play for the Heritage Junior Hockey League (HJHL) championship as their third-round series was tied with the league-leading Okotoks Bisons 2-2 after Cochrane came away with a 3-2 overtime victory in Game 4 thanks to a Patrick Forde goal in the extra frame.

"It's obviously a very different way to end a season," said goaltender Erik Garber. "I never would have thought our season would have ended because of something like this. Even though it sucks we can't finish our south final series (with Okotoks), we have no control over what happens in the world with coronavirus and it's probably the best for everyone's health that the season is cancelled, as tough as that is to say."

Garber will be eligible to return next season, but captain Brandon Aab, along with fellow forwards Jordan Fisher, Taylor Girard, and Chris Sambrook will all have their competitive hockey careers end due to the Covid-19 outbreak.

"I think we all feel really bad for them," Garber said when asked about the feeling in the room for the graduating players.

"They have all been playing on the Gens for four years now so they deserve a better ending to their hockey careers than this. For me personally, I couldn't imagine my hockey career ending like that. There's really no other way to explain it as it's just something you can't control and it truly sucks. I think they are taking it really well though which I respect them a lot for ... this is a really tough way to end their hockey careers."

The Generals also finished second in their division, just behind Okotoks with a 27-9-2 record. They earned a first-round bye, played Medicine Hat in the second round where they fell behind in the series 3-1 before fighting their way back to win the next three including Game 7.

"We had our ups and downs during the year but I think we managed to find our game in the Medicine Hat series," Garber said. "We definitely had something special this year. I think we proved that in the south finals, as Okotoks was a team who had never faced adversity, only losing three games all season and were dominating teams on a nightly basis."

"Yet we managed to have a 2-2 series with them which could have gone either way with how the games were playing out. We came together as a team this year and I think we had a real good shot at winning a championship so it's tough to see it cut short."