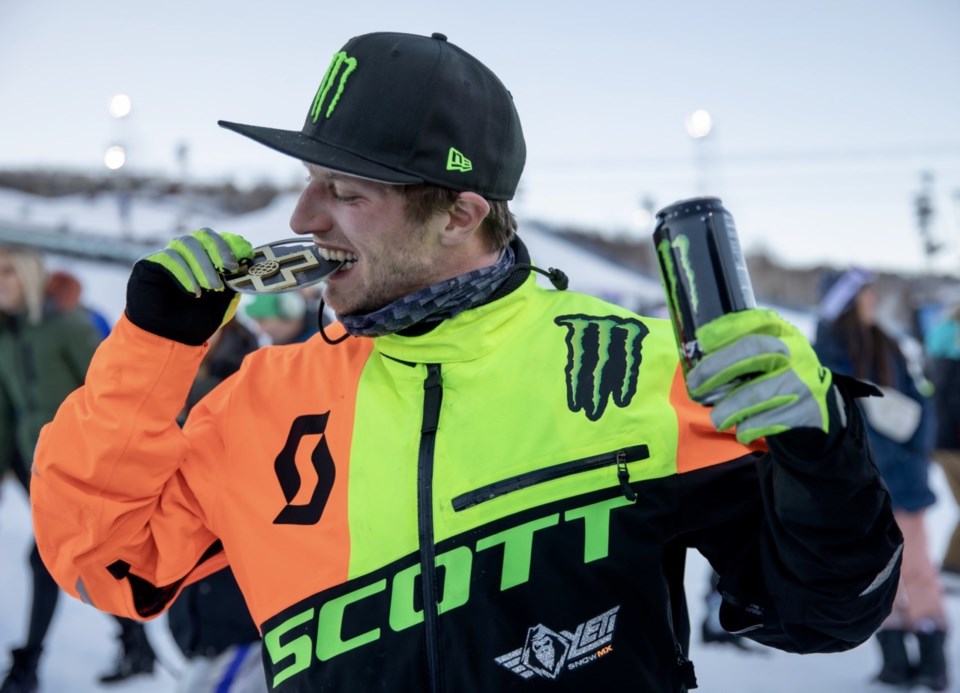 Cochranite Cody Matechuk won his third straight gold medal in Snow BikeCross at the X Games this past weekend in Aspen, Colorado. Matechuk is one of only five people to win gold in a motorsports event for three consecutive years. Photo by Jacquie Matechuk

Cochranite Cody Matechuk made history at the X Games Jan. 23 to 26 in Aspen, Colorado by taking home his third straight gold medal in Snow BikeCross when he finished a whopping 16 seconds ahead of the next rider.

He is one of only five competitors to win gold in a motorsports event for three consecutive years.

Matechuk has had a few days to soak everything in and said the weekend is still a bit of a blur.

"It's pretty unreal," Matechuk said with a chuckle of disbelief. "Especially for it being three in a row, I never thought it would happen ... it hasn't really sunk in yet."

Matechuk also said he didn't recognize he was becoming part of X Games history with his three consecutive gold medals. Only a few athletes over the course of the winter X Games have won that many gold medals in consecutive events prior to Matechuk.

"I didn't figure that out until afterward during one of my interviews (post-race)," he said. "But it's super cool, it's a pretty elite list. I think it's Blair Morgan, Doug Henry, Tucker Hibbert, and Mike Schultz now along with myself. Doug Henry won his third in a row in para (Snow BikeCross) this weekend so we got to do that together which is pretty cool, he's also on Yamaha, Monster, and Yetti so I work pretty closely with him. It was a pretty cool weekend, to get honoured and be among that elite list."

Matechuk said he's taken each victory year-by-year and has used different approaches to keep himself motivated.

"The first gold medal I won, I was so goddamn hungry for it, nobody was taking that away from me. I was either going to go home with gold or with nothing. The second one was my first year on Monster, so the first year with a big, corporate sponsor, I have my other sponsors in Yamaha and Yetti but in extreme sports, an energy drink sponsor is kind of the pinnacle. It was my first year to prove something to them and being the previous winner, I had a target on my back so it made for a challenging year."

"This year, I didn't feel as much pressure. I felt like I proved myself and it was time to have some fun with it. Then Wednesday hit and I was starting to feel a lot of nerves and pressure. I didn't think I'd feel it like that, but we just did our own thing and worked through it. The whole goal was to get through the first turn clean, then race the race ... just little things like that to break it down. Now that we're three-peat heading into next year, there's way less pressure ... I've proven what I've needed to prove, I'll obviously still be hungry for the gold but I can enjoy myself a little bit more."

Many people from the Town of Cochrane have reached out to Matechuk via phone calls, text messages, and social media in order to congratulate him, something he said he really appreciates.

"It's pretty amazing. Even old friends from high school reaching out to me has been awesome," Matechuk said. "The town has been great to me, inviting me out to events and having been up for awards like Cochrane Athlete of the Year and things like that. It's really cool to not only get recognized myself but to have other athletes from Cochrane get recognized as well. We have such a tight-knit community and even though the town keeps growing, I feel like we haven't lost the family atmosphere so it's been super cool."

Matechuk will now take a break from the snow, take some time to be in Cochrane with his family and friends before heading back out onto the road.