"Another thing I think is the people I've met, a number of people from Cochrane and Calgary who come out year, after year to support this event."
0
Jan 9, 2020 11:40 AM By: Troy Durrell 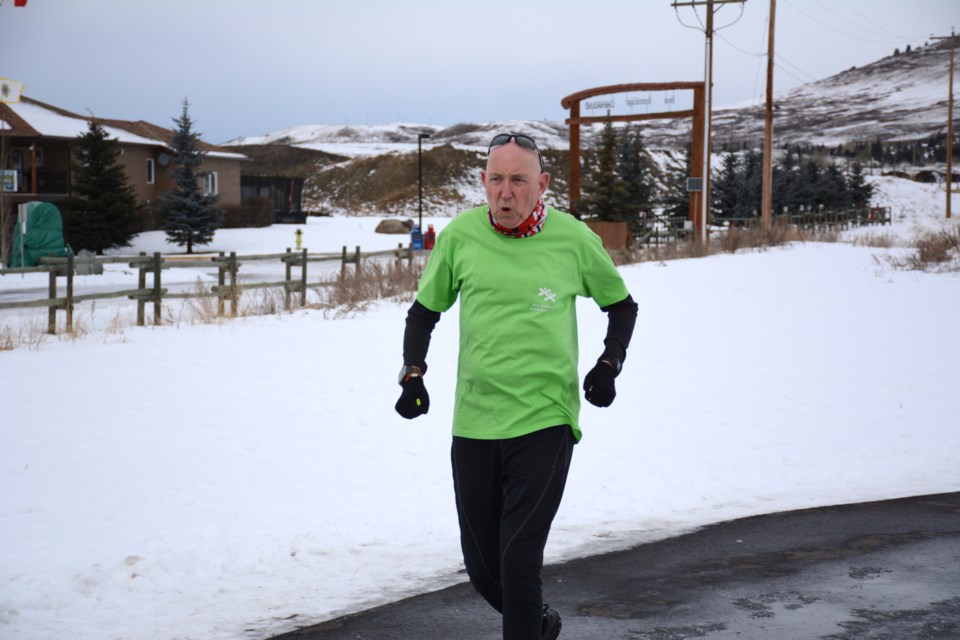 Cochrane's marathon man Martin Parnell hit the finish line and took some time to reflect on the 10-year journey it's taken to reach this point.

All the money raised, the old and new faces and certainly all the kilometres amassed, this would be the last time Parnell would run in his annual New Year's Eve marathon, an event that has been a yearly occurrence over the past decade.

"It was a terrific day ... normally I run the marathons, but this year due to being diagnosed with a stroke just over two months ago, I decided to back off a bit and do a half marathon," Parnell said who decided this would be the final year of the run in order for him and his wife to take a legitimate Christmas vacation.

"That gave me a lot of time to talk to people on the pathways, so I spent a lot of time talking to people who came in and out, on the pathways and also in the lobby where we set up the registration desk for the Boys and Girls Club. It was really emotional throughout the day building up to the end ... it was kind of six hours of emotion talking to people who had come a number of years. One fellow Hiro and his partner Angie have come every year and Hiro runs 50k ever year so it was great to catch up with them."

"But this was also a lot of people's first and last race. It was a rollercoaster of emotions, joyful to be there and help the Boys and Girls Club but also kind of saddening that it was the last one and the end of an era."

Parnell said the 10th edition of the run couldn't have gone any better and have almost reached their fundraising goal that will go towards the Boys and Girls Club of Cochrane and Area.

"It was quite the amazing day," Parnell said. "I was kind of shocked how the temperature was above zero, which is the first time in the 10 years of doing this in which that has happened."

"There was a little bit of wind and it was slick on the pathways but the crew at Spray Lakes did a fantastic job of salting and sanding. Fantastic conditions, we ended up with 126 participants from age one to 85 and so far we've raised almost $8,000 towards our $10,000 target so very pleased with how things are going."

The 64-year-old Parnell said he has a lot of memories from the last 10 years and will cherish them moving forward.

"I think the weather always plays a big role, especially when you're holding an outdoor event in Central Alberta at this time of year, in late December," Parnell said. "I remember three years ago the temperature dropped down to -48 C and it was the second coldest place on earth after the south pole ... a bunch of us actually did some loops and some running outside."

"But the thing I remember most about that day was the Calgary Zoo kept the penguins inside because it was too cold for the penguins but not too cold for us Cochrane and Calgary runners, so I thought that was interesting and definitely something memorable."

"Another thing I think is the people I've met, a number of people from Cochrane and Calgary who come out year, after year to support this event. It's like a little community that we've built and we've raised money for a number of charities including Right to Play, we built a playground in Tanzania for an elementary school, we raised money for Free to Run and this year we brought it home with the Boys and Girls Club of Cochrane and Area to raise money for their club that have nutrition and culinary programs as well as homework and leadership programs."

"I'm very happy to bring it back to Cochrane after 10 years."

Parnell will take a few weeks off before continuing to train for the upcoming Boston Marathon in April. People can still donate money to the Boys and Girls Club until Jan. 30 at https://bit.ly/35nPDfw.