Poucette suiting up for Canada Cowboys on European trip

Christorm Poucette is looking to make his dream come true by playing for Canada at a European hockey tournament.
Jun 28, 2019 11:54 AM By: Troy Durrell 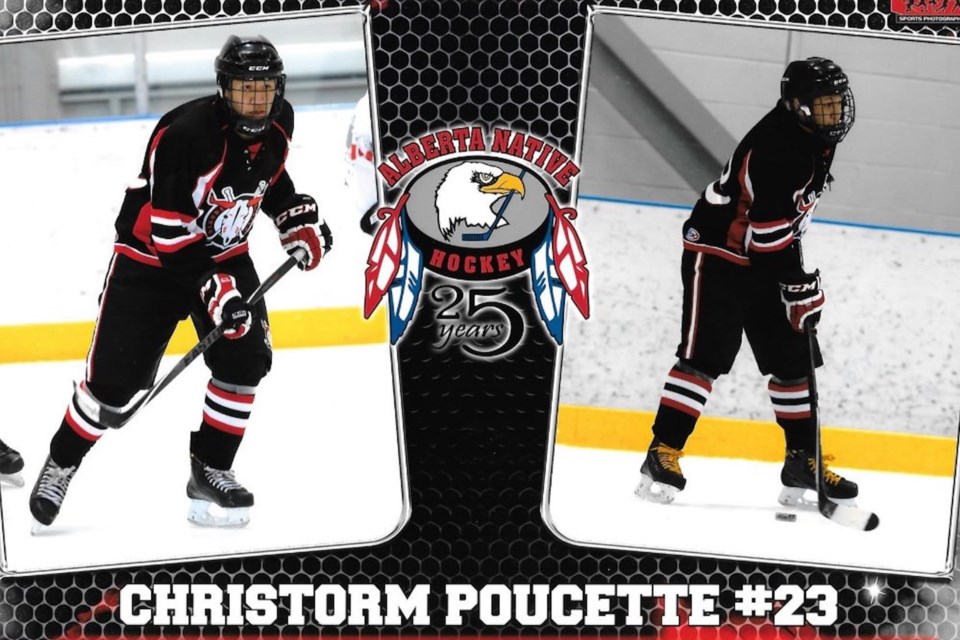 18-year-old Christorm Poucette has been selected to represent Canada with the Canada Cowboys.

There are potential storm warnings across the pond. Christorm Poucette, 18, has been selected to represent Canada as well as the Stoney Nakoda when he'll suit up with the Canada Cowboys hockey team in the 28th annual Czech Challenge Cup Tournament Aug. 6 to 10 in Prague, Czech Republic.

The team located out of Canmore will also be travelling to other parts of the Czech Republic, Austria and Italy in an all-inclusive hockey tour. Each registered club is guaranteed a minimum of five games in their respective age category. As previous tournaments have hosted various teams coming from the United States, Canada, Russia, Sweden, Finland, Germany, Czech Republic, Slovakia, Switzerland, Latvia, Spain and France, high-degree of international confrontation is assured as well.

Poucette said he was estatic when he heard the news that he had been scouted to play for his country on an international stage.

"I was excited ... really excited to be honest," Poucette said. "I got scouted during a tournament in March called March Madness in Siksika and that's where it started. Once I played my second game, my coach came up to me with this envelope and said 'you got scouted.' I opened it and it said Canada Cowboys and that they wanted me to play on their team. I obviously went to my parents first because I was super excited and told them about this tournament and that's where we are today."

Poucette has only been on the ice for the past seven years and as either caught up to or passed the majority of his peers, quickly picking up the game and showing his skills.

"I started to play hockey when I was 11 and it all started with one of my friends telling me about a tournament in Edmonton and that they needed a goalie for their team and he asked if I wanted to fill the position," Poucette said with a laugh. "I tried it, started as a goalie one year and the next year came and I tried as a defenceman and have been there ever since."

With his Aboriginal background, Poucette will not only be representing Canada at this upcoming tournament but his Stoney Nakoda roots as well. He said he'd like to do the best he can at the tournament while also being a role model for the younger kids in the community.

"I'm just proud to represent Canada and my community. I'm excited ... I don't even know how to put it into words. This is an opportunity that not too many people get and I want to make the most of it," the 18-year-old defenceman said, who has also partaken in the previous two Calgary Stampede's, riding his horse dressed as a First Nations warrior in traditional regalia.

"I try to help the youth now that I'm 18. I've been helping them learn how to skate, motivate them and try to help them reach their goals in life by being a good example."

The cost of this tour is $6,500, which is money that Poucette and his family can't front all by themselves which has led to Poucette starting up his own GoFundMe page in order to help raise some funds and offset some of the costs in order to make his dream come true.

"We've been doing fundraising every week. Bakesales, fundraising dances as well as bingo. All of that money goes to an invoice which then gets sent to the team," Poucette said. "All of the funds we raise will be going towards the trip including things such as my training camp, flight, accommodations, uniform, ground transportation, food, travel insurance and team photo."

To date, the family has raised close to $900 through the GoFundMe page, with the deadline being July 15. Those interested in donating to the cause, can visit www.gofundme.com/christorms-epic-european-hockey-tour.