Sarah Wozniewicz represents Canada during Under 18 series vs United States 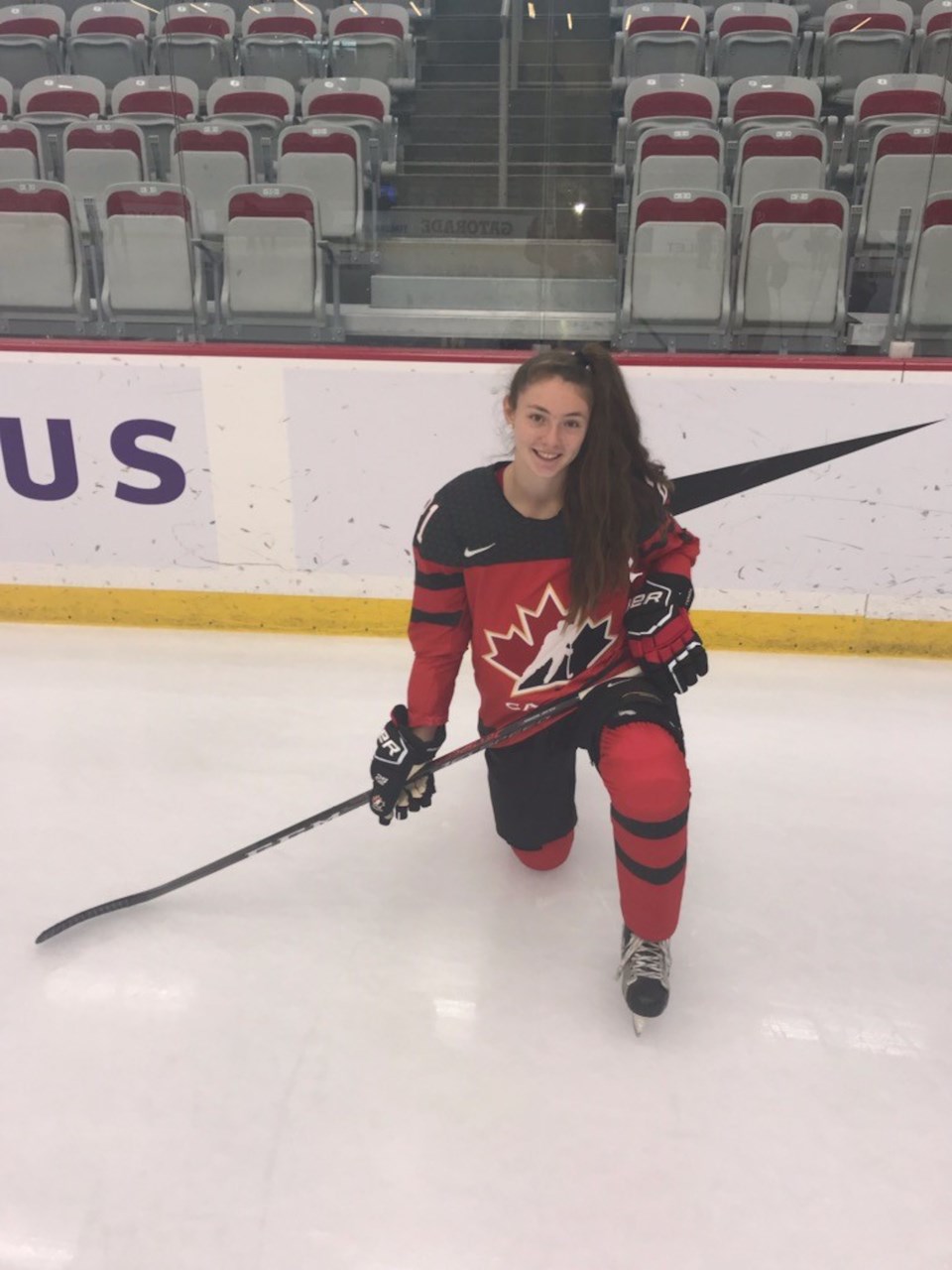 Cochranite Sarah Wozniewicz got the chance to represent her country during the Under 18 series vs the United States. Submitted Photo

Local hockey star Sarah Wozniewicz is showing the rest of the world what the people of Cochrane already knew. She's really good at hockey. Very few people in this country get the chance to represent Canada on the world stage, in fact, it's something most people can only dream of. Yet the recently turned 17-year-old Wozniewicz got to live out that dream when she was selected to play for Canada at the 2019 Women's Under 18 series vs. the United States at the classical venue of the Olympic Centre in Lake Placid, New York from Aug. 14 to 17.

"The camp was a week-long and it corresponded with fitness testing, three games, multiple practices and off-ice activities such as team building and mental sessions. I didn't know what the results were going to be at the end of camp, as anything can happen. I just tried to stay positive during the process," Wozniewicz said.

"When I found out I made Team Canada, I was speechless but so excited at the same time. It is such an honour to wear the maple leaf and I was beyond grateful for the opportunity. My family has played a huge role in helping me reach this point. They are always there to support me and help me get better. Also, my Edge team coach, Carla McLeod, has played a big role in helping me reach this goal. She has coached me for the last two years and has taught me so much about hockey and life skills."

In the opening game, Canada defeated the U.S. 5-4, marking the first time since 2016 that the Canadians had won the opener of the summer series, while also helping them improve to 26-25 all-time against the States dating back to 2007. Wozniewicz scored a goal on a pretty redirect in the high slot for Canada's second power-play goal of the evening while also helping them take a 1-0 series lead. The United States came back the following night with a vengeance, firing 35 shots at the Canadian goaltender throughout the evening, but it was Canada who struck first as Wozniewicz won the face-off cleanly back to defenceman Ann-Frederik Naud who fired the puck through the five-hole of the American netminder for an early 1-0 lead.

The U.S. would tie the game in the third period but it was responded with a goal from Maddi Wheeler with 48 seconds left in the game, where it looked like Canada was going to be able to close out the series. The U.S. had different ideas though, after a Canadian penalty with eight seconds left, the Americans knotted up the game on the ensuing face-off to push the game to overtime where they scored the game winner just a minute-and-a-half into the extra frame, forcing a third and deciding game.

In the final game of the summer series, Canada got two early goals from Lindsay Bochna and Marianne Picard in the first period and goaltender Eve Gascon shut the door, stopping all 26 shots she faced. Wozniewicz finished the event with a goal and an assist.

"I thought the series was really good. All three games were really close, but overall over the course of the three games, I thought we outplayed them," she said. "I thought I also had a good series ... I was just trying to play my game and do my best for my team."

"Winning the series brought excitement to the team. Everyone was so happy after the final game. Being able to beat Canada's biggest rival was a special moment for sure."

Wozniewicz will now spend the remainder of summer preparing for her upcoming season with hopes of qualifying for the World Championship team that will play in Bratislava, Slovakia. Hockey Canada will announce the team in November.